Tiny Wisdom: Happiness Is the Way
By Lori Deschene 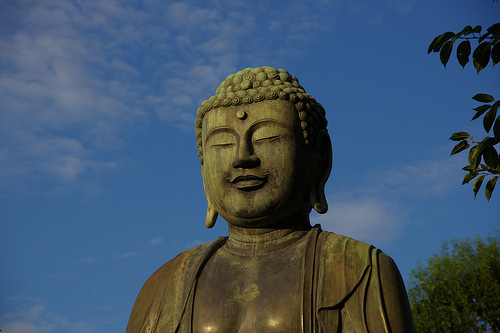 “There is no way to happiness, happiness is the way.” -Thich Nhat Hanh

I am writing this from a plane, much like a post I wrote last week. I’ve come to believe some of life’s most joyful moments happen when we least expected they would.

Just now one of the flight attendants came onto the loud speaker to announce there’s someone with a birthday today. After many of us sang to a man we couldn’t see, one guy yelled “Stand up!” and another hollered, “Speech!” And then we all started giggling, somehow conveying a Boston accent without uttering a single “R.”

It was a silly little moment, and yet it seemed kind of special. It was one of those rare occasions when a bunch of people who don’t know each other come together in good will and laughter.

I think it’s also the departure from normal conduct that makes a moment like this so engaging.

In school, whenever everyone was sitting quietly, reading, I felt this compulsion to stand up and start singing. I felt the same thing when everyone was quiet on a bus. In retrospect, I don’t think I was fantasizing about being annoying or distracting.

It’s obviously not advisable to belt our show tunes during jury duty or in line at the DMV, but maybe there’s something to this idea of creating spontaneous joy.

It doesn’t require us to do anything but be present and accessible to the people around us.

It’s saying hello to someone else on the subway instead of avoiding eye contact. It’s offering a compliment to someone in line at the bank, instead of staring at our feet. It’s making a joke in a doctor’s waiting room instead of rehashing everything that could go wrong in our heads.

We spend so much of our lives rushing past each other, dreaming or stressing about where we’re going, and dwelling on where we’ve come from.

Maybe happiness is really being where we are, and choosing to smile with the people around us.