Tiny Wisdom: The Myth of the After Picture
By Lori Deschene

“Life is a process of becoming. A combination of states we have to go through. Where people fail is that they wish to elect a state and remain in it. This is a kind of death.” -Anais Nin

It’s a seductive image—the idea of when you “get there.” What you’ll look like when you lose the weight. How your life will change when you achieve success. How everything will improve when you’re finally happy.

I first began chasing “after pictures” when I was a chubby 12 year old kid. I was convinced that slim felt like peace, and I found lots of photographic confirmation—particularly in advertisements.

I remember buying 7 mammoth bottles of weight loss juice for $100. The “before” picture in the ad didn’t just show a larger woman; she also had messy hair, a disheveled appearance, and an overall air of despair.

The woman in the “after picture,” however, seemed to have everything together. It was like she’d arrived at perfect, and now there was nothing that hurt. I wanted that. I wanted permanently better.

Years later, when I recognized I was attaching to “someday” to avoid being in today, I unintentionally shifted to another “after picture”—the day when I’d become perfectly present. It was the same self-rejection, just disguised as something spiritual.

I now realize the “after picture” is an illusion, as it pertains to weight loss, success, enlightenment, or anything else we think is permanent happiness. And it’s not because we can’t make major changes in our lives. It’s because even when we do, we are constantly transforming and evolving, inside and out.

Our bodies are constantly changing—even if we’re healthy, our weight fluctuates at least a little, and we inevitably age.

Our minds are constantly changing—we learn, unlearn, and then relearn over and over again as we discover more about ourselves and the world.

Our feelings are constantly changing. We hurt, we’re humbled, we heal, we’re strengthened, and then we do it all over again, because that’s what it means to be human.

Not only is there nowhere to get to, there is nowhere we will stay. There is just the choice of this moment: to be present and comfortable in our skin, to forgive ourselves if we struggle, and to remember that as long as we’re breathing, there is always a new opportunity to choose. 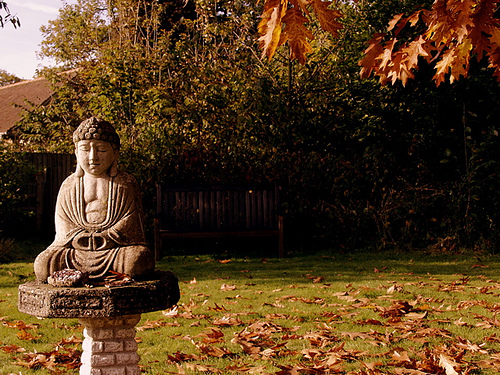