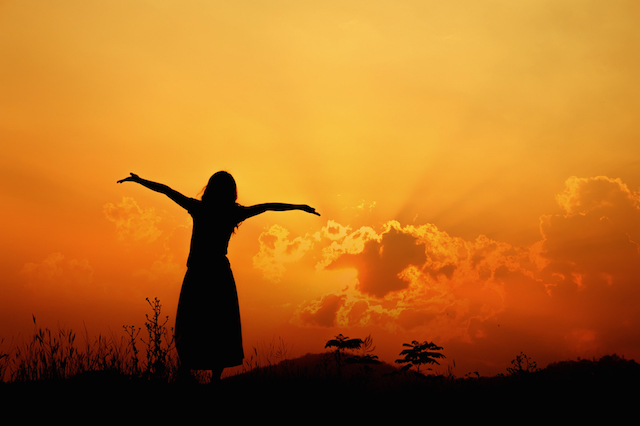 TRIGGER WARNING: This post deals with an account of sexual abuse and may be triggering to some people.

“Scars tell us where we’ve been. They don’t have to dictate where we’re going.” ~David Rossi, Criminal Minds

When I was in my mid-fifties, I ordered cable television for the first time in my life.

My husband and I had raised our two sons mostly without TV, but now they were grown and on their own. My husband and I were divorced, and I had moved to a secluded place on the high desert to pursue a writing career.

My Internet service offered a cable option, so I figured what the hell.

Reviving the Past Through Television

One evening, while clicking through the dizzying number of channels, I landed on the series Criminal Minds. Before I knew it, I was hooked.

For several months, I became consumed with this fictional team of FBI profilers as they tracked down murderers and rapists, probing the very darkest corners of the human mind.

Sometimes I broke down sobbing. Other times I felt consumed with rage. Usually, these episodes included a young boy or girl who had been raped, molested, or brutalized at the hands of someone, often someone they knew and trusted.

These weren’t exactly buried memories coming to the surface. My paternal grandfather raped and molested me from an age so young I can’t remember not being abused.

I was one of the lucky ones though. My grandfather dropped dead of a heart attack when I was seven years old.

What I didn’t realize even after years of therapy and journaling is how profoundly that early experience affected my life.

I had taken writing workshops for women survivors of sexual abuse and had been in and out of therapy. For the most part, though, I pushed it to the back of my mind and didn’t talk about it, determined to not let my past define who I became.

At times I even became scornful of adult survivors of childhood abuse. When do you just become an adult and not a victim? I would respond. When do you move on?

And, yet, I kept people at a distance. I had severe night terrors. Some years they were more frequent than others.

My husband and I had loud, angry arguments. Once I hurled a jar of salsa at his pickup truck. I was barely able to suppress a rage that seemed to simmer just below the surface.

But I was also practically incapable of standing up for myself and frequently felt overwhelmed and stressed out by life. This wasn’t the way I wanted to live. I was on a quest to find happiness and joy, but at the time it seemed like some highly unattainable goal.

However, I did consciously work on my issues. Then, when I was forty-five, I moved to China to teach English, and in a small Taoist temple next to the Nandu River on Hainan Island I began to meditate.

Slowly, my inner self began to change. And in response, so did my outer world.

My husband and I parted ways, and I built a successful freelance writing career. I met a widower and decided to give love another chance. One day I realized I was truly enjoying the journey and was no longer grasping at some elusive sense of happiness. I was happy.

Then I ordered cable.

Every day as I watched rerun after rerun of Criminal Minds, clear, vivid images began to surface. Strange as it sounds, I believe meditation prepared me to take a lesson from that TV show.

I could no longer diminish what had happened. Sometimes the fragments were so clear I could see the shoes and socks I was wearing as I followed my grandfather, like a sheep to the slaughter, out to the shed behind the farmhouse in Ohio.

I saw my grandmother watching from the kitchen window and realized she knew exactly what was going on, yet did nothing to protect me.

And I remembered inside the shed. The horseshoe—for good luck—nailed over the door. The windows looked so high, but I loved the way the light poured in through the glass and how the dust motes floated in the air. I felt like I was one of them, light and free, high above my body, circling in the clear, clean sunlight.

At times it felt like scenes that had happened fifty years ago had taken place yesterday.

But I also felt a sense of peace in owning it. I had always remembered my abuse like I was watching a movie. Distant and far away.

Now I felt it in my body. My cells remembered the fear and revulsion.

Criminal Minds also helped me put words besides “grandpa” and “maybe not that bad” to what had happened. Now I could finally name it for what it really was.

Grandpa became rapist. Pedophile. He became a man who should have been locked up for what he did to me and no doubt to many other girls during his lifetime. I may have been his last victim, but I’m sure I wasn’t his first.

And Criminal Minds finally brought home to me what my own parents had never been able to give me: as a girl child, I should have been worth protecting.

If I had been a boy I should have been worth protecting as well because both boys and girls can be victims of molest, and both men and women can be perpetrators.

Gender, class, race, religion, or economics mean nothing when it comes to the levels of cruelty humans are able to inflict on one another.

Fortunately, the same can also be said for kindness.

The Path to Wholeness

You too were worth protecting, and you too have the power to heal. It’s a lifetime journey, but it’s worth it.

These are some of the things that have helped me over the years. May they help you too.

If you’ve been abused or molested, and particularly if it happened at a young age, trust will not come naturally to you. Chances are you have poor boundaries and may open up to the wrong people while pushing away those who can help.

There’s no pat answer on how to develop trust, but do look for help among those who have experience with abuse.

My healing began on the floor of a living room in Santa Cruz, California with ten other women pouring our experiences into journals and then reading them aloud to each other.

Most important of all, trust yourself, your intuition, and your memories.

Take care of your body.

For most victims of assault, our bodies have become our enemies. Desires that should be normal and beautiful have been twisted into something sick and ugly, and often we blame ourselves.

Many victims of rape and molestation develop eating disorders. Maybe you use weight as a barrier against the world, or maybe you’re anorexic as a way to feel some control over your life.

If you practice good nutrition and exercise even if you don’t really believe you deserve it, you’ll become stronger and eventually your mind will catch up and accept that you are very much worth taking care of.

Disassociation is a common defense mechanism for children who are being abused. We go somewhere else.

I became a dust fairy dancing in the sunlight. Maybe you retreated into fantasy or simply blanked out.

If your memories of the event are sketchy, this may be why. The downside of disassociation is we feel fragmented, but the truth is, it may have saved your life. With help you can bring those disassociated selves together into one stunningly creative individual.

Be proud of the courage and imagination it took you to survive.

The journey toward wholeness is an exciting and gratifying path to follow. Finding a calm center to move out from will keep you safe as you travel through your past traumas.

Woman standing in the sun image via Shutterstock

Leslie Clary is a writer, photographer and online college instructor who believes it’s never too late to create a life we will love living. She writes a monthly newsletter, Our Daily Zen, and is working on a book about healing from child sexual abuse.

Healing from Childhood Abuse: Get Help and Take Your Life Back