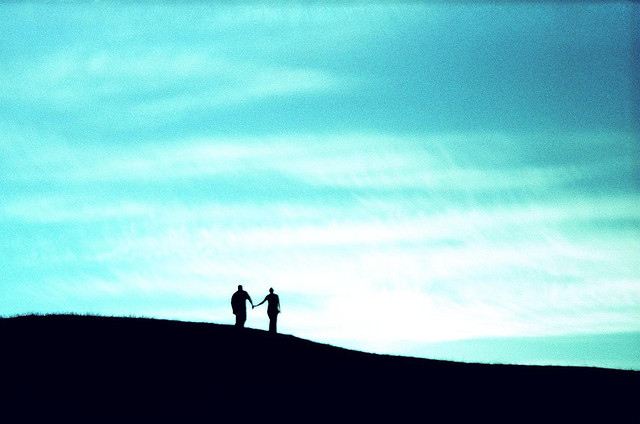 “You can’t stop the waves, but you can learn to surf.” ~Jon Kabat-Zinn

About six months into a serious relationship with my boyfriend, we started experiencing major conflict. Fighting over small things, flipping out over misunderstandings, we just couldn’t seem to get on the same page about anything. This caused me to think about relationship conflict in general, what causes it, and how to deal with it.

It’s clear that relationship conflict occurs because expectations aren’t being met. Each person comes into a relationship with certain expectations. These are based on past experiences, childhood, or how you think things should be.

The problem is that no two people think the same, no matter how much you have in common.

A lot of couples see conflict as a time to bail—either because they were already looking for a way out or because they freak out and feel threatened. When our ego feels threatened, it activates our flight-or-fight response. Sometimes it may be hard to get resolution on a conflict, making matters worse.

This requires understanding that conflict will inevitably occur in a close relationship. The only way of getting around it is to not share your opinion at all, which is not healthy.

So what if we focused on sharing our opinions in a way that is productive?

1. Remember not to sweat the small stuff.

Instead of making every little molehill a mountain, agree to not make something a battle unless it’s truly important. Realize that not every disagreement needs to be an argument. Of course, this doesn’t mean you bow to someone else’s demands when it’s something you feel strongly about, but take the time to question the level of importance of the matter at hand.

If you find yourself in the midst of a conflict, try to remember that the other person is coming into the situation with a totally different background and set of experiences than yourself. You have not been in this person’s shoes, and while it may help to try to put yourself in them, your partner is the only person who can really explain where he or she is coming from.

Granted, it’s hard to remember this in the heat of the moment. But stopping to take a few deep breaths, and deciding to take a break and revisit the discussion when tensions are not as high, can sometimes be the best way to deal with the immediate situation.

This is not to say you should have low expectations but it is to say that you should keep in mind you may have different expectations. The best way to clarify this is to ask what another’s expectations are in a scenario. Again, don’t automatically assume that you come into the situation with the same expectations.

But what if you are in the heat of a conflict and you don’t seem to be doing anything other than polarizing each other?

5. Remember you both desire harmony.

Most likely, you both want to get back on track and have a peaceful relationship. Also remember the feeling of connectedness that you want to feel. It’s hard to feel threatened by someone when you see yourselves as interconnected and working toward the same result.

6. Focus on the other person’s behavior, not their personal characteristics.

Personal attacks can be far more damaging and long-lasting. Talk about what behavior upset you instead of what is “wrong” with someone’s personality.

Most of the time, your partner is not deliberately trying to hurt you, and getting hurt happened to be a byproduct of that action.

8. Keep in mind your objective is to solve the problem rather than win the fight.

Resist the urge to be contrary just for that reason. Remember that it’s better to be happy than right!

9. Accept the other person’s response.

Once you have shared your feelings as to what a person’s actions meant to you, accept their responses. If they tell you the intended meaning of their action was not as you received it, take that as face value.

Once you’ve both had the opportunity to share your side, mutually agree to let it go. Best case scenario, your discussion will end in a mutually satisfactory way. If it doesn’t, you may choose to revisit it later. When making this decision, ask yourself how important it is to you. If you make the decision to leave it in the past, do your best to do that, rather than bringing it up again in future conflicts.

Conflict can be distressing. If you see it as an opportunity for growth, it can help you become closer and deepen your relationship.

Stacey Hagen is a coach and consultant who helps entrepreneurial women discover and develop lives and businesses they love. She is an avid traveler, adventurer, and life-long learner whose mission is to inspire and empower other women to live their lives full out. You can visit her at createcoachingconsulting.com and contact her at stacey@createcoachingconsulting.com.

The Most Powerful Way to Resolve Conflicts in Relationships

5 Simple Ways to Quickly Resolve Conflict with Your Partner