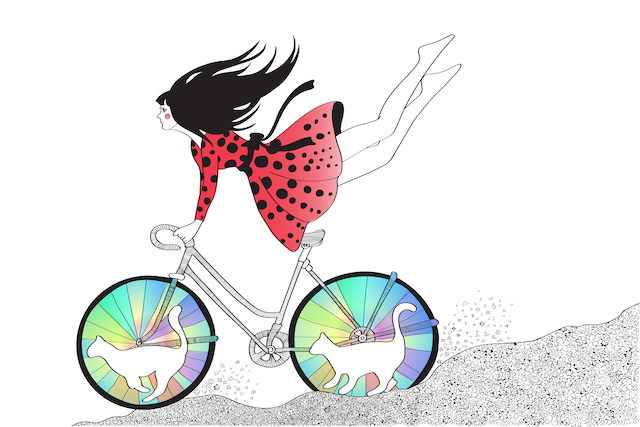 “If you love yourself it doesn’t matter if other people don’t like you because you don’t need their approval to feel good about yourself.” ~Lori Deschene

In 2010, after a surge of post-ten-day-meditation-course inspiration, I publicly announced to the world that I was going to make a film about me winning the kayak world championships.

A very bad idea in retrospect. But at the time I felt invincible and inspired.

I had super high expectations of myself and of the film and thought it was all possible.

Coming out of a four-year competition retirement meant a rigorous six-hour-a-day training schedule, while simultaneously documenting the journey, alone.

I put an insane amount of self-imposed pressure on myself not only to be the best in the entire world, but also make an award-winning documentary at the same time, without a coach.

To make a long story short, it was a disaster.

Three days before the competition, my back went into spasm. I was so stressed out I couldn’t move.

Jessie, a good kayaking friend, knocked on the door of my Bavarian hotel room.

“Polly, take this, it’s ibuprofen and will help your back relax. Remember why you are here, you can do this,” she said.

The morning of the competition I felt okay. I did my normal warm up and had good practice rides. “Okay. Maybe I can do this,” I thought.

My first ride was okay, but not great. All I had to do was the same thing again and my score would be enough to make it through the preliminary cut to the quarter finals.

Someone in the crowd shouted at me, “Smile, Polly!”

I lost my focus, had a disastrous second ride, and made a mistake that I wasn’t able to recover from.

The worst thing happened, and it all went wrong.

Humiliated, embarrassed, and disappointed, I went on a long walk and cried.

My lifelong dream of being a world champion athlete just vanished, and my heartbreak was compounded even more by the public humiliation I’d created for myself.

I pulled it together and continued to film the rest of the competition and felt some protection by hiding behind my camera.

“So, what’s next Polly? Are you going to keep training for the next World Championships?” Claire, the woman who won, asked me at the end of the event.

“No,” I replied without even thinking. “I need to go to India.”

India had been calling me for years, like a little voice that connected a string to my heart.

“Being the world champion isn’t going to give me what I thought I wanted. There is more for me to learn. I want to approve of myself whether I win or lose. I want my thoughts to support me rather than sabotage me. I want to feel connected to something bigger than myself,” I told her.

A year later, I went to the equivalent of the world championships of yoga.

Practicing at 4:15 am every day on my little space of yoga mat, surrounded by sixty other people, with nowhere to run and nowhere to hide, I began the journey of facing my internal world.

The toxic energy emitting from my mind, in the form of constant internal commentary of judgment and drama, looked and felt like an actual smokestack.

I felt like a dog chasing its tail and was in a total creative block with editing my film.

A yoga friend said, “Polly, even if your film helps only one person it is worth finishing it.”

This was not what my ego wanted to hear.

My ego wanted to inspire the world and had visions of, if not the Academy Awards, well then at least getting into the Sundance Film Festival.

It took three years, and I finished the film. However, releasing it to the world brought up all of my insecurities. I felt exposed and like a huge fraud.

How could I have made such a bold statement, failed, and then remind everyone about my failure three years later?

I released the film and ran to North India, high in the Himalayas where there was no internet.

Like leaving your baby on the doorstep of a stranger’s house, I birthed it and bolted.

Even though Outside Magazine did a great article about the film, in my eyes it was a failure.

It didn’t get into the big festivals I wanted it to get into and I didn’t bother submitting it to the kayaking film festivals it would have done well in.

In 2019 I left India and returned to Montana to teach kayaking for the summer.

It was the twenty-year anniversary of the kayak school where I spent over ten years teaching.

The school had hired a young woman paddler named Darby.

She told me, “You know, Polly, I watched your film about training for the Worlds, and it inspired me to train too. I made the USA Junior team and came second at the 2015 Junior World Championships. Thank you for making that film.”

Humble tears of disbelief welled in my eyes.

My film helped one person, and I was meeting her.

The takeaway was that my ego and perfectionism got in the way of possibly helping even more people.

I shot myself and my film in the foot so that my ego could continue to tell me I was not worthy.

But this simply is not true.

Hiding and running to keep my ego feeling safe no longer cuts it.

The world is in a deep spiritual crisis right now.

My ego would love to be in a cave in the Himalayas meditating away from it all.

However, that is not what I have been called to do.

Putting myself out there still feels uncomfortable, but I know that hiding is not going to help people. I have decided that good is good enough and am now taking small steps in the direction of my discomfort.

I have learned a huge, humble lesson in self-acceptance, self-love, and self-compassion.

The top fourteen lessons I now live by:

1. Listen to the inner voice that whispers and tugs at your heart. If you’re passionate about something, don’t let anyone or anything convince you not to give it a go.

2. Do the thing first. Enlist support from someone you trust but share about it publicly after you have done it so that you don’t create unnecessary pressure and feel like a failure if you struggle.

3. Do things one small step at a time so you don’t feel overwhelmed and tempted to quit.

4. Helping one person is a massive win.

5. Drop all expectations—the outcome doesn’t have to be anything specific for the experience to be valuable.

6. Do your best and let go of the results. If you’ve done your best, you’ve succeeded.

7. Celebrate every small success along the way to boost your confidence and motivate yourself to keep going.

8. Be proud of yourself every day for these small successes.

9. Approve of yourself without needing the ego-stroking that comes with massive success and know that the results of this one undertaking don’t define you.

10. True success is inner fulfillment. If you’ve followed your dream and done your best, give yourself permission to feel good about that.

11. Do not compare yourself to other people. Set your own goals/intentions that feel achievable for you.

12. Every “fail” is actually a step in the right direction. It redirects your compass and helps you learn what you need to do or change to get where you want to go.

13. Growth means getting out of the comfort zone, but you don’t need to push yourself too far. Go to the edge of discomfort, but where it still feels manageable.

14. If you freak out or feel resistance, take it down a notch. Move forward but in smaller steps.

Polly Green is the founder of Other Side Channelling Academy, a signature spiritual coaching program that supports driven, adventurous mid-life women as they move from self-sabotage into sobriety, unconditional self-love, and radical self-acceptance so that they can feel worthy and whole within themselves, and confident in speaking their truth. Grab her free guide: 10 Steps to Radical Self-Acceptance. Join her free training on YouTube, Instagram, Facebook, and her website.

The Truth About Failure: How Hitting Hurdles Makes You Successful