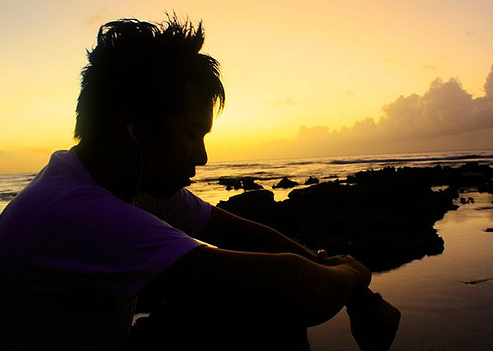 “The world is full of a lot of fear and a lot of negativity, and a lot of judgment. I just think people need to start shifting into joy and happiness. As corny as it sounds, we need to make a shift.” ~Ellen DeGeneres

I’ve dealt with a lot of negativity in my life.

When I was only 20, my dad died of ALS, or Lou Gehrig’s disease. Before that I had to watch him suffer from it for a couple of years as his body slowly lost its functions.

Also, when I was young I was bullied a lot. Because I was taught to never fight back, I had a lot of pent up anger knowing that my wrongdoers “won” and got away with it.

To this day, sometimes I have trouble letting go of both big things and small things.

As such, I tend to develop a train of negative thoughts easily, subsequently affecting my mood.

Do any of you feel overwhelmed by negativity?

The Negativity in the World

The thing about negativity is that it’s rampant.

You’re bound to encounter people who disagree with you or people who seem out to bring you down.Then there’s the negative state of the world, where bad things happen to good people and innocent people suffer for no reason.

As such, the negative thoughts tend to enter your mind.

“Why is life so unfair?”

“What did I do to deserve this?”

“What if bad things happen to me?”

And we’re told to simply accept all the bad stuff.

That, to me, is the biggest problem when it comes to dealing with negativity properly.

A lot of us are often told to simply accept, because that’s just how it is, or like me, I was told to “man up and get over it.”

With more than seven billion people on this planet, there is bound to be conflict.

But we all have a choice in how we deal with negativity. We can’t change the world, but we can certainly change our perception and responses.

Here are 3 ways to deal with 3 different forms of negativity:

It can be aggravating to face someone who has treated you unfairly, taken advantage you, or seems to just want to attack you.

Don’t think that these people have “won” and managed to have an edge over you. Realize that they are actually very insecure.

Take note of this: Every attack is a cry for help.

That is why negative people act the way they do. They never bother to find healthy ways to deal with their problems, but instead want to take it out on others.

Try to look beyond their actions to understand them and help them; but know that sometimes it’s best to reevaluate your relationship with that person.

You can do yourself a favor by ending toxic friendships. Since my dad died, I’ve realized life is too short to keep getting angry with people. I don’t fight back, but I just stop contacting these ex-friends altogether.

Also, choose to surround yourself with positive people.

Who do you like? Who inspires you? Who do you feel comfortable with? Make the effort to hang out with them more and you’d be surprised how much it can help you.

No, I don’t believe it’s as simple as “Stop thinking about it” or “Focus on the positive.”

I think it’s perfectly normal to have a negative thought. The problem only comes when you allow it to change into a train of thought that rides to no end.

For example, a close friend betrayed me some time back. When the incident enters my mind, I somehow cook up a whole scenario of me wanting to challenge him to a fight, and then I think of how I’d end up in jail for breaking the law.

See how dramatic that is?

This can go on for a good few minutes. It’s not healthy at all.

We need to recognize when we cloud our mind in this way so that we don’t let negative thoughts ruin our day.

After you recognize your negative thought patterns, dig deep and find out where they’re coming from so that you can deal with the underlying problem head-on.

As with my own example, part of the negativity comes from the fact that I didn’t do much to “get back at him.” Instead of being angry with myself, I worked on letting go of the instinct for revenge.

When you think a negative thought, recognize it, learn from it if you need to, and let it go. Then replace it with something better.

Dealing with the Negative State of the World

Thinking of the negative state of the world can be a real downer.

It’s also rather demoralizing to know that it’s a huge uphill battle to try to make a positive difference.

The best solution is to simply get out there and start helping others.

That’s not to say to immediately start a movement and try to change the world overnight. Just go do something nice for someone. Help a friend or family member out. Do a random good deed. Do some volunteer work.

When you help others, it automatically makes everything better for yourself. And the world becomes a better place.

Too often people over analyze how or when they should do something positive. Take action now, for your own sake and for those around you. That little action alone will go a long way.

You Always Have a Choice

You may not be able to control the world or the way things unfold, but remember, you always have a choice.

You may deal with people and things that seem bad, but you can choose how you perceive and react to them.

It’ll take some work, but it’ll be worth it.

Alden Tan writes about honest and real stories at his blog. He's both a passionate writer and Bboy. Check out his free book, 12 Things Happy People Don't Give A **** About!

10 Ways to Deal with Negative or Difficult People