4 Powerful Lessons from a Life Well Lived
By Lori Deschene 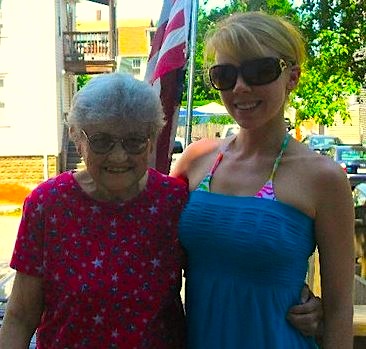 “We must each lead a way of life with self-awareness and compassion, to do as much as we can. Then, whatever happens we will have no regrets.” ~Dalai Lama

This year on June 4th, one of my greatest heroes passed away.

I’d been planning to travel back to Massachusetts mid-month for my sister’s bridal shower, but I learned at the end of May that my grandmother was in the hospital.

I knew she’d been in rehab since she’d fractured her hip, but I didn’t know she’d gained 30 pounds of water weight and her kidneys would soon fail her.

After my family told me it didn’t look good, I came home on the red eye on the 2nd, hoping to hear her voice one last time. She was too medicated to speak when I arrived, but I was able to sit with her and more than a dozen of my family members for all of June 3rd.

There were so many of us there, unwilling to leave her side, that the hospital staff opened the adjoining room, where we set up a table with cold cuts and sub rolls for lunch.

It was exactly what she would have wanted, and a testament to the legacy she left behind: Her huge, loving family stayed there, together, offering her the love and strength she’d given us for years.

My mother asked me to write and deliver her eulogy—which was both a challenge and an honor. She’d touched so many people’s lives, including mine, and in that moment no words seemed sufficient.

I feared I wouldn’t do her justice, but I knew that if she were still around she’d be proud of me, no matter what I wrote.

I am who I am in large part because of my Grammy, Jeanne Santoro (and her late husband Henry “Grandpa Joe” Santoro, to whom I dedicated my book).

So now I’d like to share with you some of the lessons that have stuck with me the most. Grammy, you taught me that….

Many of us take for granted that we’ll wake up healthy in the morning until we have a reason to believe otherwise. Grammy got that reason when she was just a child.

At eight years old, after already losing her mother, she came down with strep throat in a time when there were no antibiotics. That infection led to Rheumatic Fever and a three-year hospitalization.

She was the only one of dozens of children in her ward to walk out of that hospital—and she never failed to remember that she was fortunate to be alive.

Through the years Grammy had heart surgery, broke a hip, fractured the other, and fought off a potentially lethal virus, but she never once complained. She didn’t feel unlucky to have her share of struggles; she felt grateful for the strength to survive them.

It can seem like such a cliché to say that life is a gift, but no moment beyond this one is ever guaranteed. We can lament the challenges we face in life, or remember we’re fortunate we’re here, right now, capable of growing through them.

2. Kindness and strength can go hand in hand.

As part of a big, loud Italian family, I’ve heard my fair share of choice words shouted, in both love and frustration—but never once from Grammy.

She never said a bad word about anybody, and she couldn’t bring herself to deceive anyone in anyway.

One time when my grandfather was a young man, he asked her to tell someone who’d called on the phone that he wasn’t home.

Unwilling to tell a lie, she asked him to open the door and stick his leg outside. This way, she was being truthful when she told the caller, “I’m sorry; he just put his foot out the door!”

Decades later, she became a full-time caregiver when my grandfather lost both of his legs to an infection. Despite her tiny size, she lugged around his wheelchair so they could stay social and involved.

I was too young at the time to realize just how much assistance my grandfather required. In retrospect, I’m amazed they both smiled and laughed so frequently.

But it wasn’t just her positive attitude and strength that impressed everyone so much. Perhaps because she survived childhood trauma, Grammy was unimaginably brave.

After my grandfather passed, she fought off muggers on two separate occasions. Though she got two black eyes on one of them, she kept her purse both times, earning her the nickname “Grambo.”

Grammy was a fighter, but she was never combative. She knew it’s possible to be both gentle and strong—that the opposite of aggressive isn’t always passive; that there can be power in peace.

Writing Grammy’s eulogy was both difficult and easy. It was difficult for the obvious reasons, and easy because she embodied every positive quality you could name.

Kind, compassionate, generous, and understanding, Grammy always took care of the people around her.

I remember one particular time when she picked me up from elementary school. I was late for some reason and I kept her waiting outside, so I worried she might have been annoyed—especially since the weather wasn’t great.

She said she’d rather wait for me in the car than have me wait for her outside. As a highly impatient kid, I appreciated what this meant: She was willing to be inconvenienced if it saved me from discomfort.

She also had an amazing capacity for selfless giving, both to her family and causes dear to heart—and she never thought to keep score. She didn’t give with expectations; she gave because she enjoyed it.

Just recently I spent some time cleaning her apartment, where we found drawers upon drawers of cards and calendars—all “thank you” gifts from the many charities she supported.

I imagined all the checks she wrote over the years, and knew she gave despite not having much. She gave because she cared.

It sounds like such a simple formula, and it truly is. It doesn’t have to be money, but giving—of our time, our attention, and ourselves—is the greatest display of love.

4. Happiness is appreciating what you have.

Grammy didn’t require lots of money, a big fancy house, or the nicest clothes. If the people she cared about surrounded her, she felt rich and blessed.

Even though she lived in a small apartment with a kitchen that was almost consumed by its table, her door was always open to her family and their friends. It would be like the clown car of holiday homes—completely packed on Christmas Eve and Easter.

She didn’t see this as a sign she needed a bigger space; instead, she felt fortunate to have a big family who actually enjoyed being so close.

Grammy once told my cousin that people who want more are never happy—even when they get everything they ever dreamed of having.

She knew happiness isn’t about wanting more. It’s about truly enjoying what you have.

Today was likely the last day I’ll ever see inside my grandmother’s apartment. It seemed huge when I was a kid, just like her backyard and her garden. Over the years they started to feel smaller (unlike my grandmother who actually was getting smaller—a running joke in our family).

Still, I left that apartment feeling certain I need only what she had: enough, people to share it with, and the capacity to appreciate it.

So today I’d like to leave you with the greatest lesson my Grammy taught through example:

Look around and see what’s precious. Clear your head of all the little things that won’t matter down the line, when you’re looking back at all the times you cherished the most in life, and find a reason to make this moment one of them.

Savor something. Help someone with your talents. Love someone else in action. And let yourself truly enjoy the experience of doing it.