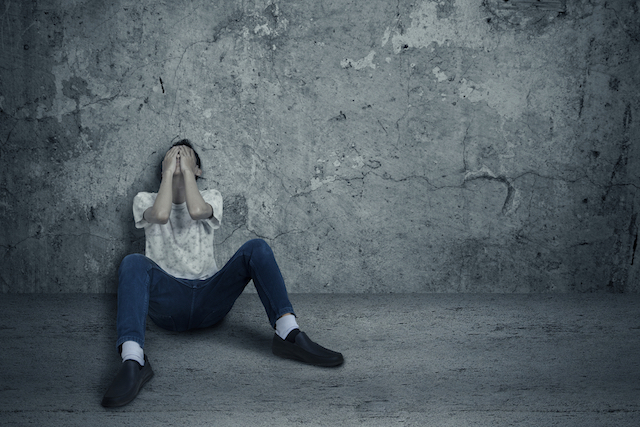 As I sit here writing this, I’m just a couple of days away from my twenty-eighth birthday.

It’s been a whole decade since an introverted, shy version of me turned eighteen years old and entered into the realms of what many people consider to be “adult age.”

Back then, anxiety, specifically social anxiety, plagued me.

At the time, however, I’d never even heard of anxiety, let alone considered that I may be suffering with this thing that could be termed a “mental illness.” Truth be told, I just thought I was a bit weird.

I thought it was just who I was. And that the uncontrollable sweating whenever I left the house, the monumental nervousness before having to go into any social situation, the sick feeling before making any phone call, and the continual worry of what might happen in the future was just an annoying part of me that I’d have to live with for the rest of my life.

The decade that followed, though, brought some huge life lessons. I graduated from college, got my first full-time job, left said job, started several businesses (failing at most), became obsessed with health, nutrition, and fitness, met the love of my life, and traveled to various parts of the world.

But around eighteen months ago, I left the personal training business I was miserable in and became obsessed with spirituality, personal development, and understanding my own brain.

I wanted to know why I’d been on this journey so far, yet still felt completely worthless as a human being and filled with panic about what people thought of me or what might happen in the future.

It was during this time I did monumental amounts of reading, inward reflection, and deep inner work in order to truly get to know what was going on inside of me. I got to understand who I was and connect with myself at a level I didn’t previously think was possible.

So as I sit here now, ten years on from my eighteenth birthday, I’d like to share four things I’ve learned over the past decade and would want to say to that anxiety-ridden, nervous, and severely introverted version of myself if I ever got the chance.

1. Be unashamedly all of you.

Part of the reason I was feeling all this anxiety and emptiness inside was that I had this belief that I somehow needed to be more than who I was. Like I wasn’t good enough as me in any present moment, and so I needed to add on external things in an attempt to bridge that gap.

Deep down, at a subconscious level, I felt that I wasn’t worthy of love or attention without chasing all this stuff that was outside of myself. The degree, the job, the business, the pay bracket.

As I attached my entire worth as a person to all this external stuff, I created a world full of anxiety for myself.

I got anxious about having to converse with people, for fear they would figure me out as a fraud or someone who didn’t have everything together. And my desperate looking to the future for a time when I did have it all together would cause regular panic when something even slightly compromised my ability to get there.

The irony here is that by never feeling “enough” or “worthy” and trying to gain these external things in order to be more than I was, I was actually shrinking my real self.

The real me wasn’t showing up in the world, and I was holding myself back from everyone and everything. Bringing just a miniscule percentage of the greatest version of myself into every situation and moment. And that’s just not fair to me, or the world.

So the first thing I would say to my eighteen-year-old self is to stop trying to be more than you are, and just unashamedly be all that you are at any given moment.

2. You get to create yourself.

One of my greatest fears as an eighteen-year-old, and for a good number of years following, was that I would be this incredibly shy and anxious person for the rest of my life.

In fact, I don’t suppose it was really a fear at the time. More a simple acceptance and frustration at the fact that I’d been dealt this hand of someone who always had a knot in his stomach, struggled to hold conversations, and was perennially labelled “the quiet one.”

If I’m honest, it caused me to really dislike and become irritated with myself. It was overwhelmingly frustrating to see other people make their way into social circles and progress in life seemingly with relative ease. Yet here I was, having to calm down and prepare myself for the simple act of making a phone call to book a dentist’s appointment.

This all just became a part of my identity, just who I thought I was and a part of me I assumed I just had to live with.

At some point along the way, though, I came to the realization that I was choosing to keep this social anxiety as a part of my identity. Maybe not on a conscious level, but certainly on a subconscious one.

I discovered that by facing up to what was going on inside my anxious head, no longer trying to push it away and suppress it, and challenging the negative thoughts floating around, I could create a blank slate of sorts, to assume an identity without all the anxiety.

In short, a person’s past does not need to dictate their present or the future. There is no “hand” we have been dealt. And so we get to create and choose into who we want to be in any given moment or phase of our lives.

3. Life doesn’t have to look a certain way.

For so long, I had this grandiose illusion that everything had to look a specific way.

I believed the “correct” path in life, whatever that meant, was already there for me, and if I veered from it, something terrible would happen. In my mind, everything was filled with “should” and “should nots” around what life was supposed to look like.

I should have a good schooling, a degree, get a good job, behave this way, do this, do that; it’s bad to do this, it’s good to do that; I should fall in line with everyone else.

Of course, I’m not saying we should go against the grain all the time. There are some aspects in life where it’s probably a good idea to fall in line. The concepts of not judging people by the color of their skin or not being a serial killer are pretty good examples.

But to just accept that everything needs to look the way society, the media, a religion, teachers, school, or even your parents tells us is not necessarily serving us best.

All this did for me was create anxiety. I had a path in my mind, and if anything threatened me falling off that path then, in my head, I would be castigated from society, nobody would love me, and my whole world would cave in.

It was as if I was constantly on the lookout for things that could move me away from how things should look. The result was being in an almost perpetual internal state of worry, panic, and dread.

But why do things have to look a certain way? Just because a direction, path, or way of thinking worked for one person, doesn’t mean it will for anyone else.

This is when I realized it was perfectly okay to challenge convention. To investigate different ways of thinking without the whole world judging me and everything falling apart. And that it was perfectly healthy, even necessary, to figure out my own path.

4. Learn to love the darkness.

This was something that took me a while to truly understand and accept. But when I did, it created a monumental amount of inner healing and peacefulness.

We all have dark parts of our past. Some maybe have darker parts than others, but that doesn’t make them any more or less valid.

I’d look into this darkness and think about how it shouldn’t be there. That it was wrong and bad it existed, and because it did, I would be judged if anyone found out; therefore, I wasn’t worthy of being happy.

In reality, every moment in my life, the good and the bad, was part of a vast sequence of events that led me to this very moment. We need the darkness in order to experience light, up to experience down, and sadness to experience joy. Without one, the other cannot exist.

Of course, deep wounds take time to heal. I’m not saying we should all be able to click our fingers and instantly love every aspect of the past, regardless of how traumatic or painful.

But opening up to the idea of letting go of resentment and frustration, and appreciating dark moments in the past for what they really are, is such a powerful step. They don’t define us, and they don’t need dictate who we are. They have given us the opportunity to harness this very moment and unleash the amazing things that are inside us on the unsuspecting world.

What would you tell your younger self if you had the chance to speak with them?

Michael Glover is a Mindset & Performance Coach, helping people balance mental, physical, emotional and spiritual health in order to build strength from the inside-out and realise their truest potential. He is host of the Enlightened Entrepreneurial Badasses podcast and blogs over on his site at iammichaelglover.com. Feel free to add him as a friend on Facebook.

How to Accept Anxious Feelings So You Can Let Them Pass