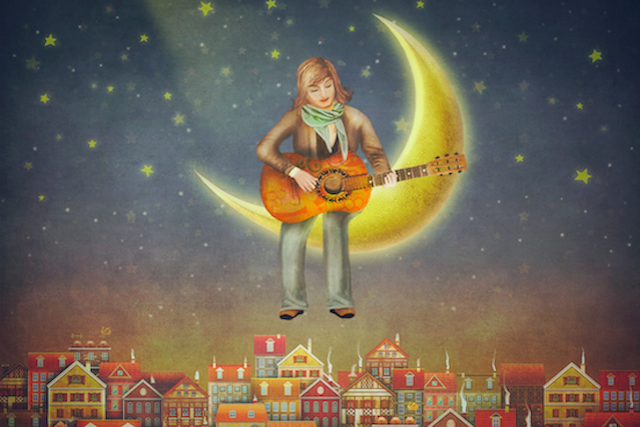 “So many of our dreams at first seem impossible, then they seem improbable, and then, when we summon the will, they soon become inevitable.” ~Christopher Reeve

Have you ever decided to pursue something that excited you, that seemed really hard to do, and then had your will tested and almost crushed? I have, many times, most recently this year.

As you may recall, I shared a blog post in January about the newly formed Tiny Buddha Productions, a film company I started with my fiancé, fellow screenwriter Ehren Prudhel.

If you haven’t read that post yet, you may want to read that now. Go ahead—it’s here. I’ll wait.

Welcome back! A lot has happened in the six months since we decided to make a short film about loneliness and connection.

We’ve faced delays, and drama, and disappointment. We’ve questioned ourselves, our idea, and our potential. And we even considered scrapping the whole thing when it all seemed far harder, and success far less likely, than we once imagined it would be.

But we’ve pushed forward, in spite of the fears and the discomfort. We’ve waded through the guck of insecurity and uncertainty. And here we are, about to start filming our first short film tomorrow.

As I sit here with a goofy perma-grin on my face, I’d like to share a little of what I’ve learned over the past six months.

If you’re pursuing a dream, and feeling overwhelmed, uncertain, self-doubting, and scared, perhaps some of my lessons will help.

1. There’s no shame in being green.

I knew going into this there was a ton I didn’t know. Although I’d studied acting and writing in college, I didn’t study screenwriting, and I had no experience producing a film or working on a set.

In addition to what I didn’t know, there was a lot I didn’t know I didn’t know—stuff about permits, and insurance, and securing locations. Every part of this has been a learning process for me, and that can feel incredibly vulnerable.

It’s easy to feel insecure and embarrassed when you’re working with experienced people and you feel a little ignorant.

But when I took my ego out of the equation and stopped worrying about what other people might think of me, I realized how fun it is to be at the beginning of a journey.

It reminds me of when I was in college, and I felt excited about everything—being on campus in Boston, meeting new people, learning from them, getting to share my work, and imagining possibilities for the future.

Would I feel more confident if I were an expert? Sure. But there’s nothing like the enthusiasm you feel when you’re just starting out. Some day I will be an expert, and I can only hope I’ll maintain this electric passion I feel right now.

If you too are at the beginning, remember: This feeling won’t last forever, so soak up the best and don’t worry about the worst. No one loses respect for someone just because they’re new. If anything, they highly esteem people who are embarking on an exciting but challenging new journey—especially if they’re not just out of college.

More importantly, your experience is worth far more than their perception, so enjoy every part of this new path. This is what life’s all about—trying things that excite you and feeling giddy, nervous, and passionately alive. Let yourself bask in it.

2. Setbacks are part of the process.

As I mentioned, it’s been almost six months since we decided to do this short film. We originally planned to shoot in in the spring, after speaking to lots of people and hiring a director, who was going to bring his own crew onboard and edit.

With the most important hire in place, I ran a T-shirt campaign to raise money to fund the film. And then the setbacks began.

The director—who, I should add, is a wonderful person, who we’d be fortunate to work with—said there were too many locations. So we re-wrote the script.

Then he told us the budget was still too small, so we increased it, to much more than we originally expected we’d spend.

Then, after much back and forth, with all our eggs in his basket, he had to back out due to personal reasons.

As the months went on, I began to feel like the girl who cried film. I’d already publicly announced the project on the blog. I’d run a fundraiser. And there we were, seemingly back at square one.

For a while I got myself worked up and discouraged. I had no idea how to move things forward with our first project, and I also knew it would be just a small step on a much larger path. But then Ehren and I regrouped and decided that the setbacks weren’t failures; they were part of the journey—to be expected.

We didn’t need to feel bad about them. We had to view them as par for the course—simply part of the process of doing something new and difficult.

So often we get down on ourselves when things don’t go as planned. But it’s nearly impossible to make a smart plan when you’re learning as you go because you have no idea what each step will entail. The only thing you can reasonably expect when you’re doing something new is the unexpected.

The good news is, the unexpected isn’t always bad. It’s usually in putting out mini fires that we learn and grow the most. Every step of a new journey is a classroom—and remember, people pay good money for an education.

So don’t let the setbacks get you down. See them as signs you’re moving up, because they are, in fact, a part of the process.

3. It helps to hold yourself accountable.

I wrote that blog post introducing Tiny Buddha Productions for a reason: I knew that this would be hard. But once it was out there in writing, and because we also told our friends and family, it felt nearly impossible not to follow through.

I could lie to myself and say I didn’t really want this that bad, but I’d already made it abundantly clear, very publicly, that I did.

Reading that post has kept me motivated when I’ve felt like giving up. It’s reminded me that this means something to me, and it’s worth pushing through my discomfort to make it happen.

Tell people what you aspire to do, and not just casually, in passing, like it’s not that important to you. You want this. You dream about this. If you’re like me, you lie awake thinking about it, and it pops into your head first thing in the morning and when you wake in the middle of the night.

You care—a lot. And it feels vulnerable to admit that, especially since everyone will know if things don’t work out as you hoped they would. Don’t let that deter you.

Not only does sharing your intentions keep you on track, it also inspires others to do something about the faint murmur they hear in bed at night and when they open their eyes.

Everyone has something that blows their hair back. Remind them what it looks and feels like to go for it. As the saying goes, “Enthusiasm is contagious. You can start an epidemic.”

4. An experience can be worth so much more than it costs.

We raised quite a bit for this project, because filmmaking is incredibly expensive. (In fact, I was shocked to learn how much it costs to make five minutes of film.)

When I shared with a loved one how much we raised, she questioned if perhaps we should pocket the cash or spend it on something else. “Why spend that money on something that might go nowhere when you could just keep it?” she asked.

Well, I’d positioned the T-shirt campaign as a fundraiser, so that’s one thing. But more importantly, I knew this experience would be far more valuable than what it would cost.

Ehren and I each have our own reasons for wanting to do this, and wanting to do it together. His reasons are his to tell. For me, this is more than a project; it’s the beginning of an exciting new life.

It’s a way to connect with who I was before healing consumed me; an opportunity to create something that will hopefully make an impact; and a chance to do something collaborative instead of spending so much time working on my own, from my computer.

That’s why I’m doing this film, and I hope many more after it: it’s something I need to do for myself, and want to do with Ehren. If that’s not worth the cost, what is?

I realize I’m incredibly fortunate to have a means to raise money, and that not everyone has that same advantage. But we all have the ability to invest in ourselves—whether that means a portion of our savings or a portion of our time.

We all have the potential to put some of what we have toward what we want to create. I know, it can be scary to do it. You can think of a million and one reasons not to use your limited resources.

There are no guarantees. It might not work out as you hoped it would. People might say, “I told you so.”

Yes, those things are true. But things could actually turn out better than you’d hoped. And if they don’t, this could be the first step on a different journey you don’t yet know you want to take.

You don’t need a guarantee to know that taking a risk—stretching yourself and coming alive—is worth it, no matter where it leads.

Having a dream is a lot like being that little man on the moon, in the picture on top. You know you can fall, but it doesn’t matter, because you’re lost in the music and the view. I’m lost in mine right now. What’s yours?