Taking Risks: 5 Things to Know Before Leaping without a Net
By Brenda Clevenger 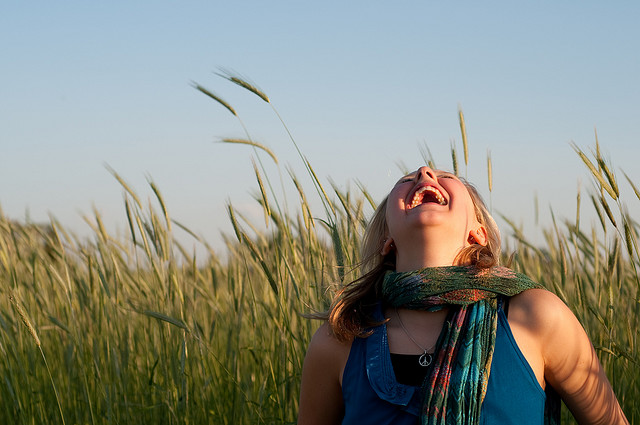 “When you lose, don’t lose the lesson.” ~Unknown

It was the perfect storm.

In 2009 my best friend got married. At 48, having never been married, I once again caught the bouquet. Two months later, my mother’s home burned to the ground. At 70 years old, she lost everything, including a pet. Three months later, her husband died.

During the process of negotiating my mom’s temporary stay at a cabin resort, I fell in love with the cabin developer. To complicate matters, I was already living with a man who I had lived with, inconsistently, for 14 years.

To summarize, in six months I watched one of my last unmarried friends get married. I saw my mother fall to pieces. I mourned my stepdad’s passing. I terminated a 14-year relationship, to be with another man. I sold my real estate business, moved from Kansas City to the Ozarks, and lost touch with my friends—and myself.

Two years later, I awoke and confessed what I formerly denied: I had just had a whopper of a midlife crisis.

Through it, I learned these 5 important lessons about happiness:

To Thine Own Self Be True

In Hamlet, Act I, Polonius shared this as his last piece of advice to his son Laertes. To be true to yourself means to not lose sight of what is essential for your happiness.

When I met the cabin developer who was there for me during a very difficult period, my love (or lust) blinded me of what made me, me.

Because I thought my marriage chariot had finally arrived, I over-compromised by moving to the country, away from the city culture I adored; by living in a depressing man cave, even though I love new and modern surroundings; and by isolating myself from my friends and simple Brenda basics, like a movie theater and a salad bar.

Friends warned me upfront that, because of these differences, I should reconsider pursuing the relationship. But I didn’t listen, until one day my inner voice me forced me to fess up. Not only was I unhappy; I was miserable.

A good friend of mine has always known who she is, what she wants, and what is a deal breaker in her relationships. She doesn’t date men with kids and, in her words, she doesn’t sleep with Republicans. She’s Aquafina clear on her criteria. To her own self she’s don’t-screw-with-me true.

We’re just plain happier when we know our needs and honor them.

Always, Always Have a Plan B

When I jumped ship to pursue a life with the cabin developer, I just knew we’d be married within the year. To ease the guilt of breaking up with someone I once considered my soul mate, I told myself that he had his chance: I’d given him 14 years to ask for my hand. He hadn’t and he wasn’t going to.

For years I told my friends that I didn’t care about marriage and didn’t want it, but for some strange change of heart and mind, I certainly wanted it now. I could see the finish line, and it had an altar behind it.

However, I had a Plan B if my leap into the developer’s arms proved ring-less. I would move back into one of my rental properties and start another business–something I could be successful doing based on my 20-year entrepreneurial track record.

Turns out Plan B had to be executed. I’m glad I planned for it, because one night I cried out loud, “I want my old life back.”

We can’t know going in whether the things we thought we wanted will make us happy. We can only know we’re willing to walk away if they don’t.

In Eat, Pray, Love, when Liz Gilbert tells her husband she doesn’t want to be married any more, she plans a one-year journey abroad. Prior to departure, she has a brief love affair with an actor named David.

Halfway through her journey they break up, but she chooses to look back at David as teacher, not a mistake. He taught her about meditation and his Indian guru’s ashram where she learns to forgive herself. David came into Liz’s life for a reason, just as the developer came into mine.

He helped me and my family through hell, pulled me out of a relationship that had plateaued, and taught me to focus on the right goals (mine) vs. society’s (marriage).

Our relationship reminded me everything that I cherish begins with a c: city, culture, cats, camaraderie with girlfriends, creative work, and a contemporary home and office environment to thrive in.

Everyone we encounter can teach us something about the people we want to be. Happiness is recognizing and appreciating that.

Even if you’ve retrained your brain to look at your past as being filled with teachers and life-changing lessons, you may still harbor guilt.

One thing that helped me through my guilt was that I previously understood the consequences of ending a relationship to begin another. I knew I would be closing doors that never could be reopened again—both to a long-term love and friends affiliated with that love.

So, in hindsight, I wasn’t purely out of my mind or in a hormonal funk, as formerly accused. I knew the consequences and accepted them upfront, not after the failure of what turned about to be a two-year love affair.

Forgiveness is the gift you give yourself that acknowledges you’re human, according to Erin Pavlina. We tend to be our own worst enemies when it comes to self-talk, self-blame, and self-wallowing.

I could have returned to Kansas City hanging my head in shame for leaping to conclusions about finding Mr. Right, mercilessly ending a relationship with no forewarning or clear explanation, and losing touch with friends I’d one day sorely miss. But instead I forgave myself for losing my way.

We’re inevitably going to make choices we wouldn’t make in hindsight. Peace is accepting that.

Get Back On Course

I honor myself for being a woman who loves deeply and never settles for a relationship that restricts rather than flowers. This summer, sitting at home alone and relationship-less, I’m happy to have opened that door. Granted it didn’t lead to where I thought it would, but I know in my heart I needed to open it to discover my true self.

In the 1998 movie, Sliding Doors, the main character’s love life and career both hinge, unknown to her, on the sliding doors of the subway. If they close before her and she misses that train, her life turns out one way. If she catches it, her life takes a completely different turn.

I had been on the train, on and off, with my 14-year relationship—far longer than a passenger should sit. The cycle needed to be broken. The only man persuasive enough to get me off that train was the cabin developer.

I know the next door I open will lead to something greater and more powerful. I no longer expect marriage to be the final train station, but I do have expectations of being the conductor, not the passenger. Finding someone to be my co-pilot on this journey would be a bonus.

Forgive yourself for any seemingly useless stops or diversions you’ve made throughout the years. As long as you’re honest with yourself along the way, you are on the right course.

Brenda Clevenger is a writer and publicist. You can read about her midlife journey at www.MidlfeMonaLisa.com where she shares love and levity with her swinging, soul sisters about starting over with a fresh canvas.