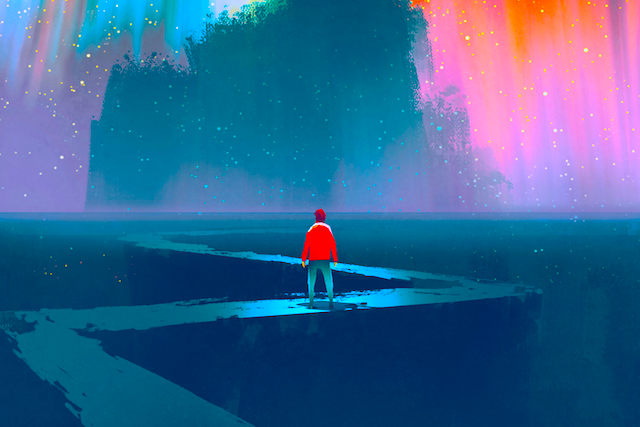 “If you hear a voice within you say you cannot paint, then by all means paint and that voice will be silenced.” ~Vincent Van Gogh

I don’t think there is anything more liberating.

At least nothing I’ve experienced at this point in my life.

I’m sure it’s happened to some of you. Probably more times than you can count.

The freedom I’m alluding to here is the moment when you do something that a part of your mind didn’t believe was possible.

Interestingly, the word ecstasy comes from the Greek ekastis, meaning “to step outside of oneself.”

And when you are able to rise above your doubts and fears, it can be absolutely ecstatic.

But the process of getting there is not without mixed feelings. You may have a kind of Stockholm syndrome with the parts of your mind that are holding you captive. These doubts and fears are yours; they have been whispering in your ear, dictating your actions; and they’re hard to let go of.

Last year I went through a period of being heavily influenced by my own doubts and fears. I was juggling some health issues and had recently started a Masters degree, all the while working full-time.

I was soon exhausted and began to fear that I had taken on too much. This was compounded by a number of setbacks I had at work. The launch of a product that I had been working on for six months fell flat when sales were drastically less than I expected.

Maybe it would be fair to say that they weren’t just setbacks. Actually, I’m going to call them failures. Because although when I take a step back, I can be diplomatic enough to call them setbacks, at the time, when I was completely involved in the outcome, they felt like nothing less than absolute defeats.

But I didn’t quit on the project. I kept going forward, whether by my own hard-fought persistence, faith in something greater than myself, or even just a conditioned habit. Probably a bit of a mix of all three.

And now, this year, things are starting to pay off. But the fruits of my labor are somewhat bitter-sweet, as I realize just how indoctrinated I was by my own doubts and fears.

So I’ve done some reflecting, and I’ve identified the mental shifts that have helped me keep going and step outside of myself in times of need.

Here are four ways to keep going when your doubts and fears are holding you back.

Recognize that everyone has doubts and fears.

When we are gripped by doubt and fears, they can feel strong, overwhelming, and completely unique to us. We feel we have to believe them because we don’t realize everyone feels these things—even incredibly successful people—and we can actually choose not to give in to them.

For example, I recently told a friend that I often feel tired when things in my business don’t work out the way I expect. I was momentarily humbled when he replied, “You know that happens to everyone, right?”

The human brain is wired to invest energy in things that are novel. When we recognize that our fears and doubts are common, we learn to give them less attention when they arise, which slowly drains their magnetic pull. And over time we get better and better at feeling the fear and doing it anyway, whatever it may be.

What stands in the way, becomes the way.

This phrase comes from the Roman Emperor and philosopher Marcus Aurelius. It’s a powerful reminder to that we can always work with what’s in front of us, and even use it to our advantage.

Our brains have the tendency to see the world in terms of objects. We roughly sort these objects into “tools” and “obstacles.” If you look at obstacles as part of the path going forward, they transform into tools. However, if you only see potential tools as obstacles, you’ll quickly become overwhelmed by everything in your life that may stand in your way.

Over the last few years, I’ve dealt with a chronic back injury, which has meant that I have to take frequent breaks from sitting down in order to manage the pain.

Initially, I was frustrated that I couldn’t simply work for eight hours straight, without interruption. Fortunately, I’ve come to see the way I work as, well, just that—the way I work. It may be unconventional, but it’s still a tool that gets me to where I need to go, and not an obstacle that stands in my way. In fact, the breaks allow me a mental rest and help me to be just as productive as if I was able to work all day, maybe even more so.

Come back from the future.

Perspective is everything. We often feel doubt and fear when we’re fixated on our current situation. The longer we focus on our concerns, the more intense they appear.

Our thoughts and feelings often change over time, and we can use that to our advantage. One way to do that is by realizing things have often turned out better than we once feared they would. We can take this a step further by coming back from an imaginary future and looking at the present moment through the same lens.

I do this in my own life by visualising my future self looking back at any worrying situation. Sometimes I like to write down the question “What would the ninety-year-old me think about this situation?”

For example, three months ago I decided to invest in a course to improve my marketing skills. The price didn’t break the bank, but it did create some anxiety about when money would come in and pay it off. When I asked the question of my future self, I immediately felt relieved, because I realized the anxiety was caused by a story about one month of income, and a lifetime of potential earnings was quick to put the concern into perspective.

Whether or not they recognize it or admit it, everybody has thousands of small successes and failures in their life. However, our minds can hone in on the failures and cause fear and doubts to run rampant. If you’ve begun to neglect the part of yourself that is successful, it’s incredibly useful to remind yourself that this part still exists.

You can do this by intentionally doing something you know you’re good at and know will elicit positive feedback. For example, if you’re a talented artist, but you’re not feeling so confident at work, create something that you know will make you feel proud.

This works because winning causes a dopamine spike in the brain, which leads to an increase in motivation and risk-taking behavior. The positive feedback loop can start from something as trivial as a board game, and creates the perfect antidote to fear and doubts: momentum and confidence.

When the product I created fell flat, I spent a couple of weeks meditating for longer periods of time and pushing myself in the gym. This helped remind me that even though something I had invested time and energy in had failed—and I was very disappointed—I was still psychologically and physically strong, and my strength was the only tool I needed to try and try again.

These four ideas are relatively simple, but that doesn’t mean they aren’t incredibly effective. If you can put them into practice whenever you’re feeling held back by doubts or fears, you’ll begin to have more insights into what you are truly capable of—and you’ll begin to actually reach your potential.

Doing something you previously didn’t believe possible is truly liberating, and the more you embrace these shifts in perspective, the better you’ll be able to tackle these worries in the future!

Ben Fishel is a transpersonal psychotherapist. He has a background in neuroscience, counseling and existential psychotherapy and is on a mission to help people improve their mental health with cognitive science and spirituality. Ben offers online therapy worldwide (with the exception of Canada & the U.S.). You can book a FREE 15-minute call to see if you’d like to work with him—and don’t forget to follow him on Facebook for more of his essays.

5 Tips to Overcome a Major Setback