8 Ways to Turn Disappointment into Meaningful Success
By Lori Deschene 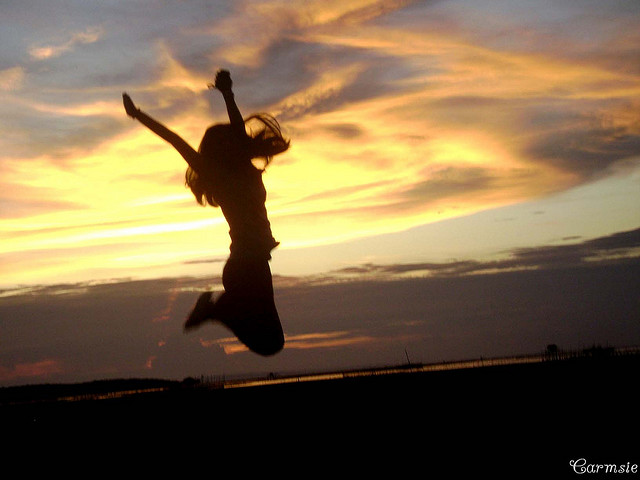 Have you ever looked back on your life, exactly a year ago, and felt amazed by how much has changed?

Last year at this time, I’d only just started this site and I was competing in a blogging contest. Ignite Social Media, the marketing company behind the mood supplement SAM-e, had come up with a clever crowdsourcing campaign to generate awareness for the product.

In the beginning of the fall, they advertised a contest to win a dream blogging job. The winner would get a six-month contract to write one short daily “good mood” blog post—as well asa new laptop and $5,000 per month, totaling $30,000.

In order to win, candidates needed to get enough votes to be in the top twenty—out of close to a thousand people—and then needed to get even more votes in a second round that involved a video.

At the time, I was still collecting unemployment after being laid off earlier in the year. I was also putting all my heart into building Tiny Buddha around the ideas of wisdom and happiness and running my old blog, Seeing Good.

I knew Brigitte Dale was in the running. In case you aren’t familiar, Brigitte Dale is a popular vlogger who used to make videos for ABC Family. I wasn’t certain if I—or anyone—had a chance up against a bona fide web celeb who could clearly bring in big traffic for SAM-e. And then there was her obvious charm—even I fell in love with her watching her videos.

Still, I was going to do everything in my power to try. The judges said ultimately they would choose the winner, regardless of who had the most votes, so I reasoned that it was anyone’s opportunity to earn.

I’d put a lot of effort, very publicly, into creating that possibility. Thousands of people supported me, voting every day for months. People had blogged about it, tweeted about it, and emailed friends about it. At first, I felt like I’d let them, and myself, down.

Then I decided to focus on the many gifts Ignite Social Media gave me. I might not have gotten the job, but I felt a renewed sense of purpose in my writing, an increased confidence realizing how many people believed in me, and a deepened commitment to building this site.

Now, as I finish my first book, which I will hand to my publisher in a little over a week, and I look around at the amazing community here, I realize there is no such thing as failure if we realize it isn’t an end. We can decide what failure means.

If you’ve dealt with any disappointments lately and you’re wondering how to turn it all around, know that it’s never over.

Here’s how you can bounce back from failure and turn it into success:

Failure is a subjective term. If you have very rigid ideas of what it means to succeed, you will often feel disappointed. If there’s one thing that’s certain in life, it’s that nothing is certain, so why pin your sense of self-worth to something that may or may not happen?

When I didn’t win the SAM-e contest, I decided to focus on what I did accomplish, both within and outside that venture. I ran a successful campaign and still wrote something every day for Tiny Buddha. Regardless of the outcome, that was a success, and it led to others.

2. Find the value in failure.

If you’re looking for a job and you don’t ace an interview, you could either decide you failed at that interview, or you succeeded in learning something to help you in the next—which might be an even better opportunity than the one that just past. As the Dalai Lama said, “Sometimes not getting what you want is a wonderful stroke of luck.”

I could give you all types of statistics for entrepreneurs and companies that eventually succeeded after abundant failures, but I’m not only talking about monetary success. I’m talking about personal success—bouncing back from a disappointment and continuing to move forward on the path that makes you happy.

I believe one of the greatest achievements in life is the choice to be empowered, not paralyzed, by a disappointment. There is no greater success than the ability to take responsibility for your joy.

3. Act on what you’ve learned.

Anything can be useful if we learn from it and then do something with that knowledge. The second part is where a lot of us get tripped up, and understandably so. On the one hand, we know that consistency is crucial to creating positive change. On the other, we know that insanity is doing the same thing over and over again and expecting different results.

Unfortunately, there is no magical formula for creating the lives we visualize. No one can tell us what to keep doing and what to do differently. We have to gauge for ourselves what’s working and where we could improve; and then we have to keep going, knowing full well there are no guarantees.

4. Focus on the process, not the results.

Another benefit of adopting a process-oriented approach is that it’s easier to be mindful when you focus on the action steps. This doesn’t mean you stop setting goals and measuring your progress toward them. It just means let each step fuel your sense of meaning, joy, and accomplishment.

5. Accept that it isn’t always personal.

As much as we’d like to believe hard works always pays off, sometimes there are things beyond our control that have nothing to do with what we did or didn’t do. This may be the reason a lot of people try and try again only to achieve the same results. Some things are just harder to do than others.

If you go to seven interviews for sportscaster jobs, but every time, you’re up against industry veterans, your failures may have a lot to do with who you were competing against.

We can always find room for improvement, but sometimes we need to accept that results aren’t always reciprocal to efforts. However, we increase our odds of creating results if we choose to move forward regardless.

6. Create your own luck.

In his book The Luck Factor, psychologist Richard Wiseman found that extroverted people who are open to new ideas and possibilities tend to consider themselves lucky. He hypothesized that their willingness to engage with people and consider different opportunities, coupled with their ability to encounter adversity without falling into despair, positioned them for good fortune.

If we stay positive and keep our eyes open, we will inevitably see opportunities in life. It’s the difference between walking with your head held high and noticing a rainbow, and walking with your gaze on your feet and seeing only puddles.

It’s entirely possible that you failed because you set yourself up for failure. SMART goals work—they’re specific, measurable, attainable, realistic, and time-bound.

If you’d like to start a business but you have a full-time job and a three-month old baby, this might not be the best time. It’s more realistic to believe you can succeed once you make adjustments in your schedule than when you’re overwhelmed by family and work responsibilities.

I forget where I recently read this story, but a young boy was looking to get a job. Everywhere he went, he heard they weren’t hiring, so he decided to set a new goal: for each company he visited, he would either get a job or sell them a “Not hiring” sign which he would make.

When we think outside the box, we might not get what we want, but we’re more apt to get what we need. I didn’t get the SAM-e job; I worked far more than a couple hours each day throughout this whole year; and I suspect I didn’t earn $30,000 for the entirety of 2010.

Yet this has been the most fulfilling and empowering year of my life. Regardless of losing, I succeeded. And you can, too.