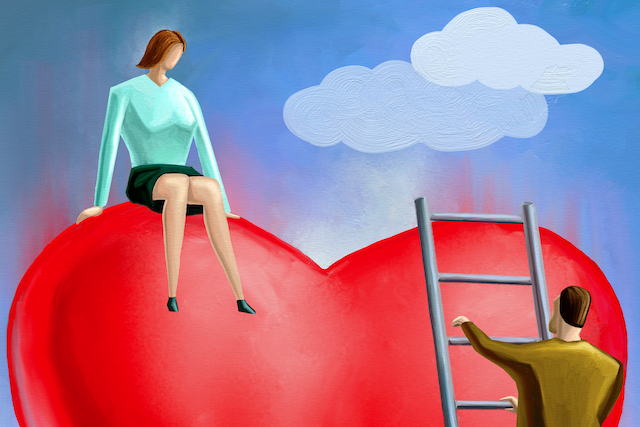 “When someone tells you who they are, believe them.” ~Maya Angelou

After having been a rebound girl the summer of 2013, I swore I would never get involved with another emotionally unavailable man who had baggage and was a poor communicator.

He came on very strong in the beginning, telling me he deleted his dating app after our first date, that he turned down other dates because he didn’t want to waste time with other girls, and showed me in more ways than one that I was his priority.

Things were too good to be true.

Things were at the height of our relationship, and I use this word loosely because it really wasn’t a relationship.

After a heavy night of drinking he confessed that he was scared to get into another relationship because he associates them with pain and feeling trapped. He admitted that he puts up walls, shuts down, and he just couldn’t bear to go through another breakup again.

We hadn’t even made it official and he was talking about breaking up. He told me he didn’t want to lose me, nor did he want his baggage to ruin what we had. He would give this a try.

This lasted for all of about twenty-four hours when he ended it. Poof. Gone.

Sucker punch to the gut.

How can someone do a 180 overnight? It dawned on me that he probably had one foot out the door the entire time. Why did I, yet again, get ahead of myself and trust someone that I barely knew?

When I saw him on a dating site six weeks after the split (after him telling me earlier that he didn’t want to see other people; he just wasn’t ready for a relationship), I panicked.

I confronted him about it and he took no accountability for ending things the way he did. He has convinced himself that he is being honest with me. He became hostile and angry that I contacted him.

I sent myself in to a six-week black hole, and I will never get those six weeks back. I always thought of myself as someone who had high self-esteem, but I began questioning why I was upset over someone who shut me out so intensely and quickly.

Why was I upset about someone whose opinion of me, quite frankly, doesn’t matter? The people whose opinions matter are the ones who have actually stood by me through thick and thin.

Here’s what I learned through my pain:

1. Don’t put someone on a pedestal.

They are not perfect and you will always be disappointed if you continue to do so.

2. Take time to get to know someone before jumping to conclusions about your future.

It’s through tough times when you get to know someone the most, not when things are good.

Even if he or she seems to be doing everything “right,” sometimes you need to trust your gut and use your head.

I have gone through this before, and I will go through heartache again. Each time I pick up the pieces of my broken heart I learn a little bit more about who I am, what I deserve, and what I am capable of giving someone. I can rest my head each night knowing I stayed true to myself, and you can too.

I have learned this many times, the hard way. Trying to fix someone else chips away at your soul. Worry about yourself and let them figure themselves out when they are ready.

6. Just because a romantic relationship failed, that doesn’t mean you are a failure.

I look at the many healthy relationships I have in my life with friends, family, and coworkers, who choose to be in my life and are always there for me. I don’t want to be in anyone’s life that doesn’t want me in it.

7. Don’t apologize for having feelings.

I truly believe being able to express emotions is a sign of strength, not weakness. Anyone who is incapable of accepting or reciprocating feelings is missing out on one of the most rewarding gifts in life.

Looking back, I saw the flags and never raised questions because my heart was in too deep. I would have saved myself a lot of time if I had the confidence to speak up.

9. Be upfront early on about what you want.

If the other person is intimidated or scared and runs away, better early on then months or years down the road. Don’t assume they feel the same way as you do.

I have so much to offer, and you do too. But some people just aren’t open to receiving it. So long as we’re willing to acknowledge that and move on, we’ll find the love we’re looking for.

Brianna lives in NYC and prides herself on trying to live a healthy lifestyle inside and out. She has a corporate job by day and stays busy travelling the world, crafting, and staying active.