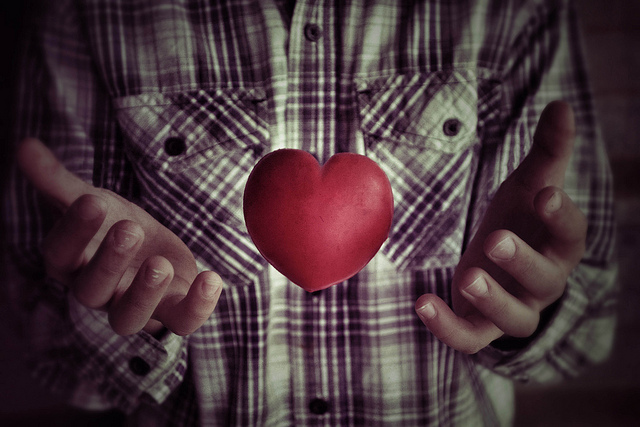 “Gratitude makes sense of our past, brings peace for today, and creates a vision for tomorrow.” ~Melody Beattie

I’ve never had a problem with forgiveness.

In high school my mother and I would argue endlessly. Her lectures and my rebellion both had no end. While it was true that my mother had her faults, my independence caused me to be less than willing to follow her direction.

At one point we were arguing, as we usually did, which meant hours of crying and lecturing. As I pointed out to her yet another of her faults she said something that I have never forgotten:

“At least I didn’t tell you that you were worthless.”

She was right. That’s what her mother had drilled into her head again and again, making sure she understood that she had little value to the world. A lesson that I suspect she still believes or at least struggles with.

At some point in her life, perhaps while she was pregnant with me, or maybe before, she determined that this was one legacy she would not pass on. She would never tell me that I had no value, and indeed she never did.

While it may seem like nothing, to struggle against your upbringing, to stop a cycle of emotional abuse, is a phenomenal act of strength.

I didn’t know what I hadn’t received.

I didn’t know what she had fought to prevent, and the mistreatment that easily could have come my way if she hadn’t managed to fight so well against her own upbringing.

But what I did know is that it must have been incredibly hard for my mother to break that cycle.

While it doesn’t excuse other behavior, I could forgive her easily because of the gift she gave me, the gift that said I was worth something to her and to the world.

It was a gift that set me up for a much more successful life than I would have had otherwise, and it gave me one less issue to deal with later.

From that point forward, in every circumstance, I could tell that those who had wronged me in some perceived way were simply doing the best they could do with what they had.

You may know the pain others are bringing you but it’s often hard to see the pain they have held back and kept to themselves.

It exists and it’s important to honor the work they are doing to prevent you from experiencing it. We all fight against our demons, and often we do this without anyone else knowing.

And then I met him.

He was a sociopath—someone who didn’t care about me, didn’t care about anyone. Everyone in his life was just someone or more appropriately some thing to use, to control, and to manipulate to make him feel powerful.

There’s been plenty written about sociopaths, how they find people to love them, how people can get pulled in, so I’ll skip how I got there and just say I am glad that I’m out.

But out wasn’t so easy.

For the longest time I couldn’t get past this relationship. I dealt with my hurt, my anger, the disbelief that I could allow this to happen, and yet there was something that wouldn’t let me let go.

What was it that made me think of this relationship when I woke up in the middle of the night? Why couldn’t I get past it?

And then reading some book or another, I stumbled on it: forgiveness. I hadn’t forgiven him.

But how could I? With my mother, she was doing the best she knew how. Most everyone in my life was doing what they knew to do, not intentionally bringing harm to anyone, just sometimes catching people in the crossfire.

But this was different; he wasn’t doing the best he knew how—he knew better. He knew that what he was doing was harmful, manipulative, and destructive, and rather than struggling against his instincts and sometimes coming up short, he dove into the abusive behavior.

I kept thinking about forgiveness, talking with others, searching for an answer. How can I forgive someone who knows he hurt me and is happy about it? My friend suggested pity, that I feel sorry for him because he will never truly be peacefully happy. And while that’s true, pity isn’t exactly forgiveness, now is it?

The answers had to be out there somewhere. There had to be a way to forgive.

During our relationship, I’d joined a group to deal with my codependence, something left over from my less than perfect childhood—something that had negatively impacted every relationship I’ve ever had.

This group had brought more positive change to my life than any other thing ever had—more than any counseling or self-help books.

This support group largely got me through this relationship alive. One day, as I sat in my meeting, listening to others struggling with their lives and issues, working hard to overcome their own dysfunctional family histories, it hit me:

Gratitude was the answer.

I was grateful. Not half-hearted grateful, as in “Well I guess it worked out OK,” nor thankful because I had lived.

No, I was screaming from the rooftops grateful, Julie Andrews running through the field singing grateful. Grateful for this person who had come into my life and forced me, pushed me into a group where all of my childhood issues, all my past relationship problems, so much of my own dysfunctional behavior now made sense.

I was grateful because thanks to him, I knew where these patterns started and, more importantly, I knew how to stop them.

I had the promise of a much better future and it wouldn’t have happened without him. Sure, I would have learned these lessons eventually through other relationships, slowly plodding away at each problem, picking at it, and learning from it, but this was all of my past issues, all at once.

Insight. BAM! A huge rush of learning and awareness, all in one relatively short year.

I wouldn’t trade it for the world.

That one experience spiked my awareness, blew open my mind, and freed me from so many past issues, allowing me to have a future unthinkable prior to this experience. How could I possibly hold a grudge against that?

How could I possibly not forgive, if not him, the universe for bringing this experience into my life?

While I would never allow him back in to my life, and I still feel certain he is a sociopath, I’m glad, happy, giddy even that our paths crossed. I didn’t simply survive him; I became a better person because of him.

You can’t rise up from the flames without first being burned to the ground.

It’s so important to ask ourselves “This horrible thing that happened…what have I learned from it? What lesson did it teach me?” And, “How has it made my life better?”

If nothing comes up, keep looking, because far too often the hardest experiences teach you the most powerful and transformational lessons.

Jessica Dally is a network admin at Community Voice Mail, Social Media Marketing Manager at Wildlife Media, and the founder of Seattle Free School, a nonprofit run without money. She enjoys skiing, riding motorcycles, and traveling. You can find her on her website or on twitter at @jessicadally.

Anxiety Is Not My Enemy: How I’ve Learned to Accept It And Cope

Why I Now Complain Less and Appreciate More

Why I’m Grateful for Accidents, Pain, and Loss