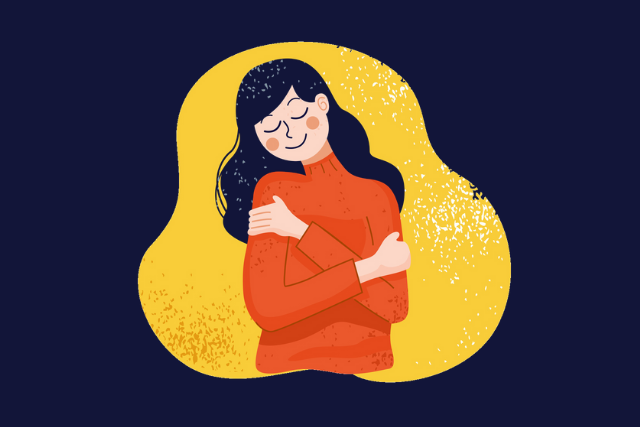 “Be nice to yourself. It’s hard to be happy when someone is mean to you all the time.” ~Christine Arylo

When the alarm went off, the haze of a dream dissolved into the memory of yesterday’s failure. My stomach was still full from last night’s binge, and I was utterly disgusted with myself.

How could I have blown it again? What was wrong with me?

I grabbed a notepad and pen and resolved that today would be different. Today I would stick to my diet!

As I had every day for the previous several weeks, I made a list of every single thing I would allow myself to put into my mouth that day, and its exact calorie count.

The fact that this totaled up to starvation rations was, to my adolescent mind, perfectly sensible. I had to starve myself.

Until I reached the (utterly arbitrary) “optimal” number on the scale, I would never be acceptable. Lovable. Enough.

Or so I thought. The fact that my body was already a healthy weight had nothing to do with it.

But this day, like all the days before, did not go as planned.

By the first break period, hunger veered me from my rigid diet and I bought a cup of raisins and peanuts—a “forbidden” snack that took me well over my daily calorie allowance. Then, furious at myself for blowing it, I sought comfort by gorging myself on the very thing I was impossibly trying to avoid: food.

Day after day it was the same vicious cycle: impose crazy-strict limits, fail to follow them, beat myself up, numb out by binge eating, beat myself up even more.

Then, in disgust and desperation, I’d lock myself in the bathroom and secretly throw up.

All of which, of course, only made me feel worse about myself, so I’d impose even stricter limits, which were, of course, even more impossible to stick to.

This pattern of shame cycled on and off for close to a decade.

Sometimes it was worse, sometimes better. I had periods when my eating was relatively normal, but for a long time I believed that, like a recovering alcoholic, I’d never be entirely free from the danger of backsliding. “Once a bulimic, always a bulimic,” I often said.

Over my years of healing, though, I was pleased to discover that I was wrong.

It didn’t happen overnight, but I’m living proof that it is possible to break free from binge eating behavior.

I could tell you all the things that helped me in my journey toward health. For example:

When I looked back from decades later, a pattern emerged. Underlying all of these influences was the simple concept of self-compassion.

Acknowledging that I’m human, allowing myself to be imperfect, treating myself kindly and gently when I stumble—this, I have learned, is a foundational practice not just for healthy eating, but for living a happy life.

When I let go of my rigid food rules, and when I ceased to beat myself up for “blowing it,” there was nothing for me to rebel against.

And when I gave myself permission to be human and imperfect, there was no need to beat myself up anymore.

It turns out the tendency to over-consume after a small stumble is a well-documented phenomenon.

The actual scientific term for it is the “What the Hell Effect,” as in, “Oops… I’m trying to quit smoking, but I just took a puff from a friend’s cigarette. What the hell, I might as well smoke the entire pack…”

Since beating ourselves up seems to invariably lead to the “What the Hell Effect,” a group of researchers wondered whether self-compassion might act as an antidote, and decided to test their theory.

One study brought women dieters into a lab, one at a time, ostensibly to taste test candies.

In fact, they were studying the effects of self-compassion on binge eating, but they didn’t tell the women this.

Upon entering the lab, a researcher wearing a white lab coat (signaling authority) presented each subject with a tray of donuts, and instructed her to pick her favorite kind and eat it (thus blowing her diet!) Then the researcher handed her a full glass of water and asked her to drink it all, so she’d feel uncomfortably full, and hence very aware that she’d blown it.

Next the researcher showed the woman into a room with several bowls of different kinds of candy, handed her a clipboard and pen in order to rate them, and told her she could eat as much as she wanted.

What the women in the study didn’t know is that the candies had been carefully weighed in advance. In fact, the scientists threw out the rating sheets—what they were really interested in was how much candy the women ate.

Here’s where things got really interesting. The only difference between the control group and the experiment group was that before letting the experiment group into the “candy tasting” room, the researchers gave these women a very small self-compassion intervention, which went something like this:

“You know, we’ve noticed that a lot of women feel really badly about eating the donut. We wanted to remind you that first, you did it for science, and second, everyone blows their diet sometimes. So don’t be too hard on yourself.”

It seems like such a small thing, but guess what? That tiny intervention made a very big difference. The women who were told not to be too hard on themselves ate almost one third the amount of candy as the control group women!

This mirrors exactly my own experience with binge eating: When I was finally able to forgive myself, remind myself that I’m human, and treat myself kindly, the bulimic behavior simply dissolved.

Like so much else in life, self-compassion is a practice. Most of us were not trained to be self-compassionate as children, but thankfully, we can learn to do so as adults.

In my own life, this simple practice has been life-changing. Not only do I have the healthiest relationship with food of any woman I know, but I’ve learned to allow myself to be human in every other area of my life as well, and I’m happier than I’ve ever been.

I wish I could go back and give my seventeen-year-old self a self-compassion intervention—it might have saved me decades of misery.

Of course I can’t go back in time, but I can share what I’ve learned with you. I hope it helps you as much as it helps me.