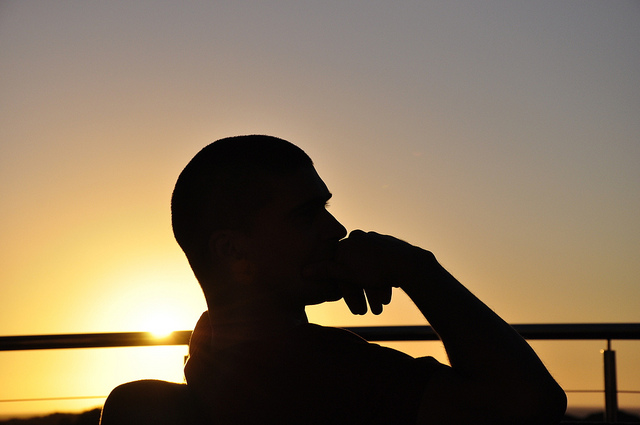 “As he thinks, so he is; as he continues to think, so he remains.” ~James Allen

It was a beautiful day as we drove down the Desert Road two days after Christmas. The Desert Road is a stretch of highway in the North Island of New Zealand.

On one side of the highway, three magnificent volcanoes provide the only break to the bleak, stark landscape. Otherwise, the ground is covered in dry grasses, rocks, and a straight highway to the horizon.

During the drive, my husband and I were discussing the New Year and what would be the next adventure.

As Edith Piaf began to sing “Je ne regret rein” on the mp3, our conversation swung to my mother’s death the past year and how she and I could never see eye to eye.

My mother was a wonderful woman, but I was never the daughter she wanted and she was not the mother I wanted. As a child I wanted to be a nurse, but she convinced me that I was too smart to be just a nurse and needed to become a doctor.

I did try hard and when I failed out of medicine, my mother was disappointed.

She wanted me to marry someone well educated and from a good background. You can imagine her disappointment when I married someone raised in the Gorbals in Scotland who had failed to graduate an Honors BSC in Higher Mathematics.

And she wanted me to take care of her, be at her beck and call, as we lived two doors away from her. Imagine her total frustration when we moved with our sons half way around the world to New Zealand.

I pulled over as regret and guilt overwhelmed me. My eyes filled with tears and my head throbbed. I thought her death ended all the recriminations. I thought I was at peace with our differences, but at that moment there definitely was regret and grief.

And as Peter held me, he reminded me of the way to solve problems and a way to move beyond the immediate pain of guilt and regret.

As we drove back onto the highway, we discussed how to use ICE to deal with the feelings of guilt and regret. ICE is an acronym for a technique to solve problems.

First, you Identify your feeling, the problem, or the situation.

This stems from the belief that when you can name something, you then can deal with it. The naming needs to be precise and identify the “issue.” In this case, the “issue” was my feeling of regret and guilt.

Next, you Control or corral the “issue.”

To control or corral an issue, first you have to take the emotion out of it.

Start by taking several deep breaths to clear your mind. Then talk to someone, even yourself, about how the issue affects you, and if you want it to affect you in that way. Your choice: continued pain or more pleasure.

Peter and I discussed how my guilt and regret were still holding me back from being what I could be. I needed to make a choice to move on and accept the fact that it was impossible to undo what was done.

Then, you Execute or eliminate the “issue.”

When I accepted and acknowledged what had happened, I could even laugh at the fact that I no longer had to account to my mother for my present or my future. I could put my mother issues where they belonged, in the “what I learned” box, and move to live in today.

Using ICE to keep success thieves away is like keeping thieves out of your home. You identify where they can break in. You control the points of entry by using locks or security to keep them out.

You make it more difficult for the thieves and so eliminate or reduce the possibility that they will steal your treasures.

As we drove on, we looked for other emotions and situations that steal my ability to function.

And so my quest began—a quest to identify other reactions that steal my success or cause regret.

The journey has been exciting and extremely challenging.

The first step was getting clear that success was made up of hundreds of steps; identifying success and finding my own definitions, not my mother’s father’s or anyone else’s.

My personal success is just that, personal. I remember when my mother would scold me for failing to meet her standards and expectations. I remember my father shaking his head about the decisions I made, decisions that he was certain would lead to my demise.

I remember other key figures in my life expecting me to be one thing and their disappointment when I made a different choice than the one they wanted me to make.

Once Identified, I needed to learn how to corral the emotions and other issues. As I controlled or corralled the “issues,” I removed their power to make me doubt my success. I compartmentalized the issues so that I could decide when to deal with them.

Now I can eradicate those habits when I choose or decide not deal with the “issues,” but they no longer have any power to stop me from enjoying my success and magnificence.

Yes, there are still times when my self-doubt and personal recriminations about what I do and how I do it make me curl into a fetal position and pull the covers over my head.

On the Desert Road that morning, I realized that I could ICE any thief that threatens to steal my success.

Life is too short for grief, guilt, and regret. Yes, the tears still come when I think of my mother, but I no longer fall apart and pull off life’s highway overcome with the regret.

What problems or emotions can you overcome by ICE-ing them?

Roberta Budvietas is the author of Who Stole My Success. She is a Business Class Mentor helping others to start, grow or change their businesses.

What You Need to Know About Motherhood If You Feel Lost