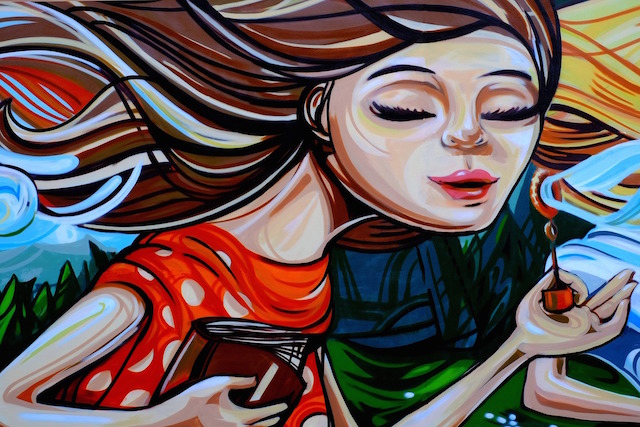 It’s the worry, I think. The constant worry. Is she safe? Will she make the right choices? Will she find a young man that will cherish and support her? The worry is always there. It never leaves.

She recently visited Los Angeles for the first time. A business trip. She had a few hours to kill. What to do? The Wizarding World Of Harry Potter! The girl is not shy. Flying solo would not be a problem.

Later that night I get the call. The hot topic was how to properly pick out a wand. She even texted me a visual aid. And apparently, she’s a Ravenclaw. A “sorting hat” made that determination.

I could have sworn she was Gryffindor!

Yep. Two nerds. Later that evening, I get another text, “Goodnight, Old Man.” I respond with, “Goodnight, Dweeb.” Our banter always brings a big smile to my face.

The thing that hit me so hard about that conversation was her innocence. She’s twenty-seven years of age and yet that precious part of her remains.

My armor is old and unyielding. Well worn from decades of struggle. But with her, all that melts away.

Her innocence brought tears to my eyes. Like a toddler falling for the first time. A primal flood of emotion. The kind you can’t run from.

I had become a role model. A guardian of sorts. This was never supposed to happen. Not to a guy like me. I was cut from a different cloth.

My father’s version of parenting began with a right hook and ended with bruises. His rage, the look in his eyes, was terrifying. And my mom, in spite of her good heart, was an alcoholic nearing the end.

She died of cancer when I was just twenty-eight. Ten years later, my father passed. I got the news from Google. A random search done on a whim. I had not seen him in over twenty years.

This was my life. The only life I had ever known.

Losing my mom was tough, for sure. But more than anything, it was a relief. I know that sounds horrible but it was. Even more so with my dad. I was finally free. The burden had been lifted. The darkness was no more.

That was the cloth I inherited.

So I had to go it alone.

I would make my own luck. I would craft new DNA. Whatever the price, I was willing to pay it. Which helped me to break down walls. Healing? Not so much.

By age thirty, I was making six figures without a degree. I’ve run ad agencies, been a top-tier management consultant. I’ve directed and produced two short films and a play.

I rose above the right hook.

Brooke had wrapped up college and was about to enter the workforce. It was not going well. Friends suggested a trade agreement. Brooke’s legendary organizing skills for a few coaching sessions.

A few months in, her walls collapsed. All the pain and fear. Years of struggles. Tears running down her cheeks. There she was standing before me. All of her.

It took me a few days to process everything. Being a caretaker? To a twenty-two-year-old girl? The Universe was clearly stoned. How else to explain it? I had no answers.

But as each day passed, my resolve deepened.

Someone had to stand up for this girl and that someone had to be me. Because, you know, an almost fifty-year-old single man, mentoring a single twenty-two-year-old girl, that doesn’t throw up any red flags!

My life is rarely boring.

I still believed this would be a no-brainer. Easy breezy. Provide some counsel. Buy an occasional lunch. Help Brooke on her journey.

Our brokenness is always there, beneath the surface. Stirring. Churning. Waiting to heal. It just takes the right set of ingredients. The right circumstances.

For me, that was a 5’4” twenty-seven-year-old with a Harry Potter wand in her hand.

It’s actually kind of perfect, given the people involved. As the years passed, the trust between us grew. And she started opening up. The real stuff. Career. Boys. Life. Roommates. Money. Insecurities. We talked about everything. Still do.

Which included calling her out when need be. That always felt odd. She’s not my spawn but at times, I seriously have to wonder.

I took all the calls when her world collapsed. I occasionally cooked her breakfast, which included insane amounts of bacon. We started going to movies and just hanging out.

And more of my armor fell. Piece by piece.

And more her armor fell. Piece by piece.

Then I noticed something. Several somethings, actually.

She was doing a lot better. She was growing into a confident, successful young woman. And she would emulate me. Which was kind of crazy. And totally awesome.

I had to be a legit role model. Holy crap!

And then the check-in phone calls and texts started happening. She needed a comforting voice. My voice. I had become that voice. Wait! What? When did that happen? And wow, that happened?!

It was all very humbling and beautiful.

When the holidays rolled around last year, we decided to meet for breakfast and exchange gifts. Kerbey Lane, an Austin favorite. It was my turn to rip open presents.

I knew it was a book. You always know when it’s a book. But this was no ordinary book, this was Tsugele’s Broom, a favorite from her childhood.

And it came with very specific instructions.

The book told the story of an independent young woman in search of a good man. Brooke’s instructions were simple. When I believed she had found such a man, I was to return the book.

What the hell was happening? More tears welled up. Is it always like this?

I was suddenly overcome by a profound need to immediately hug her. Unfortunately, that almost resulted in me knocking over our table. A gymnast, I am not.

A few people looked up. I blushed. She had a good laugh.

This young woman. This dweeb.

I love her so very much. And I worry.

The right-hook childhood. The dark trauma of my youth. All that stuff is slowly healing. Beneath the surface. The deep kind of healing. A soul scrub of sorts.

And so it is with her.

I get to watch that happen. I get to be a part of that process.

That is the cloth I wear now.

And it took a Ravenclaw for me to see it!

Which is not to say that it’s all roses. There is still work to be done. And we’re finding those answers together. One moment at time. Two imperfect nerds finding their way.

A middle-aged man. A twenty-seven year-old girl with a wand.

In this life, I got to be an almost dad.

It’s kind of a big deal.

In my final moments, whenever they may come, I’ll remember Brooke’s first tears. The tears that called me out. And the fact that I answered that call.

There is so much more to you than you could ever realize. Seriously. It’s true. So answer the call. Whatever that may look like for you. Answer the call.

Find the cloth you thought impossible to wear.

Because it’s down there. Somewhere.

Bob Olmstead is a brand strategist and success coach that will help you unlock the Secret Sauce that will set your business or personal brand on fire! It's human journey and that's a good thing. Your greatest competitive asset is your passion and commitment. He offers a free initial brand assessment to get you started at bobolmsteadink.com.

4 Things You Need to Know to Have a Strong, Healthy Relationship