Are You Limited by the Fear of What Other People Think?
By Leah Cox 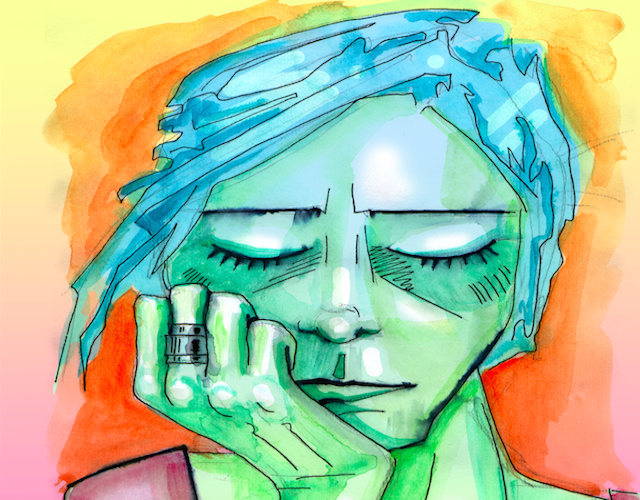 “It is not uncommon for people to spend their whole life waiting to start living.” ~Eckhart Tolle

A few months ago, I found myself on the busy streets of London’s Covent Garden.

It was a mild Friday evening in the capital and the masses were out celebrating the end of the working week, looking forward to the weekend ahead.

But that’s not why I was there.

I’d come to Covent Garden on that day for a special project.

For most of my life, the fear of what other people thought of me had kept me trapped. It had prevented me from reaching my full potential and from enjoying life to its fullest.

I couldn’t bring myself to dance in public for fear that people would point and laugh. At work I was unable to voice my opinions for fear they’d be thought stupid. And at my lowest point, even walking down the street became a struggle, as my mind ran wild with images of people talking about and laughing at me as I went by.

I lived a half-life. I knew I was missing out. I also knew I had so much more to contribute to this world. But I was paralyzed by the fear that if I put myself out there I’d be ridiculed and rejected.

And so the “real me” remained cocooned somewhere inside. I knew she was there, I knew who she was, but fear kept her trapped.

But sixteen months ago, things began to shift. Filled with an increasing sense that I wasn’t living my purpose and a vast emptiness from the lack of meaning my life seemed to have, I quit my corporate office job in search of answers, determined to live a more fulfilling life.

I made a commitment to myself then to face each and every one of my fears and to find a way to reconnect to the real Leah and let her out into the world.

The last sixteen months of my life have been challenging, as I commit every day to living a little further outside my comfort zone. But being in that space of discomfort and crossing the threshold from fear into courage has led to the fulfilment I craved as I realize just how much I’m capable of.

I’d be lying if I said I no longer gave a second thought to what others think, but for the most part I can push past that to do the things I know I need to do.

And so it is that I arrived in Covent Garden, in the hope of now encouraging others to free themselves of that fear of what others think and embrace life in its entirety.

And so there I stood, on the crowded streets of London that evening, holding a sign handcrafted from old cereal boxes, saying:

“How often does the fear of what other people think stop you from doing something?”

The reaction to this simple question left me gobsmacked.

Some smiled knowingly, acknowledging that their own lives had been affected by the fear of what others think.

Some nodded with something of a sad look on their face. Perhaps there was something they really wanted to do but were being held back by that fear.

Others engaged in conversation, sharing their stories of how the fear of what other people thought had touched their lives or how they’d learned not to care so much.

That day, I experienced for the very first time the extent to which the fear of what other people think affects our lives—all of our lives. What might we be capable of if we could let go of that fear?

I went home that evening having learned some valuable lessons…

Too often we suffer our fears in silence. We believe ourselves to be the only one.

Everywhere we look we seem to be surrounded by confident people.

But I’ve come to realize that everyone—those who appear confident or shy; extroverts of introverts—we all, each and every one of us, are struggling with our own fears.

When the fear of what other people think is holding you back, take a look around and remember, everyone is living with his or her own fear. You are not alone.

By confronting your fears, you help others confront theirs.

More than anything, when you stop caring what others think and set out to achieve your goals and dreams, you give others the power to do the same.

Someone is always watching and wishing they had your courage. By stepping up to your own fears, you really do help others face theirs.

Be vulnerable and honest. Being open about your fears and confronting them head on could be the greatest gift you ever give.

What you think they think isn’t the reality.

Those people over there? The ones you think are talking about you? Judging you? They’re not. Really. They don’t have time. They’re too busy worrying about what people are thinking about them!

And even if they were looking at you, judging you, talking about you, you can be almost certain they’re not saying the awful things you imagine.

Instead, they’re envying the color of your hair, your shoes, the way you look so confident.

What we think people think of us usually doesn’t come close to the reality.

Freedom from the fear of what others think is possible.

The fear of what other people think of us is like a cage.

Over time you become so used to being inside that cage you eventually come to forget what the outside might be like. You resign yourself to living within its walls.

By taking deliberate and purposeful action to overcome the fear of what others think of you, you slowly regain your freedom and escape from the confines of the prison you’ve created for yourself.

And life outside that cage? It’s pretty awesome!

It’s a place where you can be the person you always knew you were meant to be.

And that, being fully self-expressed, being everything you know you are, fulfilling your greatest potential in life, well, that’s the greatest feeling you could ever know.

Don’t let the fear of what other people think stop you from living the life you were born to live.