Bounce Back and Thrive: The Secret to Turning Adversity into Opportunity
By Nick DiNardo 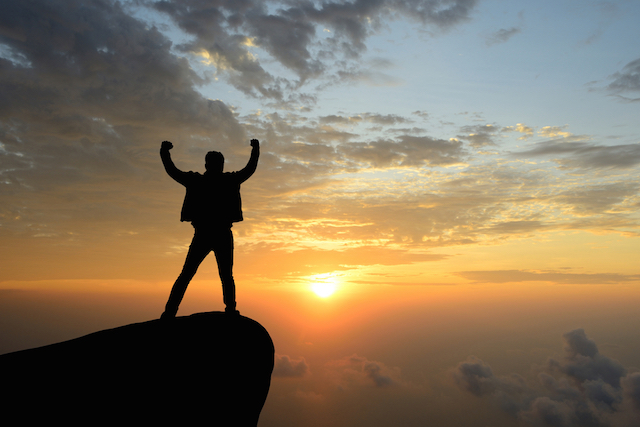 “Sweet are the uses of adversity which, like the toad, ugly and venomous, wears yet a precious jewel in his head.” ~William Shakespeare

It’s hard for me to write about this. I suppose it stems from being a mutt of Italian and Irish ancestry, two cultures famous for intense pride and keeping personal things “in the family.”

I wonder if my parents ever loved each other.

By the time I was eight years old, it was clear they did not get along. I never witnessed them getting along, or even being affectionate toward one another. But I always felt loved.

My parents told my younger brother and me that they loved us every day, most days multiple times. We never struggled for anything.

My father had sold his garage door business years earlier, but that money seemed to be drying up. We lived in a 3,000 square foot house that my father had built six years prior. Six years later, it was in foreclosure.

I’m sure the pressure was tough on them. My mother was not herself either. She was acting erratically. Inconsistent.

One minute she was playful and full of life, the other she was angry and depressed. We soon found out that she was battling bipolar disorder, and she was forced to spend time in the hospital for evaluation and recovery.

Shortly thereafter, my parents officially separated, we lost the house, and my brother and I split time between my grandparents’ house (where my dad was crashing) and the apartment where my mom was placed after her treatment.

The house was daunting from the street. It was big and blue with white trim. It looked like an old New England colonial that was turned into an apartment building. At the time, it had about eight or nine units.

Our unit was one room, about 400 square feet, with one bed. When my brother and I stayed with Mom, we didn’t have enough room for all of us to sleep on the bed. I would volunteer to sleep on the floor, so that my mom and Jesse could get a comfortable night sleep.

There was no kitchen in any of the units. The kitchen was downstairs on the first floor, in a common area, of which all the tenants would share. At dinnertime, it would become crowded, noisy, and often overwhelming for our family…and I am willing to guess most of the other families, too.

I remember, at eight years old, thinking to myself, “This can’t be all we deserve. There must be something more to our lives than this.”

It was an intense time, and it would turn out to be one of the key moments of impact in my life. A moment in time that would serve as a reminder, and beacon, for the person I strive to become every day.

I don’t share this story to gain pity. Nor do I share it as something to compare to your life, and the situations you’ve encountered. I share it to demonstrate how this moment in time is one of a series of moments that I choose to use to my advantage. Without it, I would argue that I would be less full as a human being.

My adversity is my advantage. The story I tell myself about the adversity I face is that advantage.

Why? Perspective and practice.

Think about the first time you tried to hit a baseball. You didn’t know what to expect. You hadn’t developed any muscle memory. No hand/eye coordination. The first pitch you tried to hit was most likely a miss. You failed.

However, there was something that came along with that miss. You began to get perspective. You tried out skills that you never used before, like self-awareness. Did you swing too late? How about rotating your hips?

Next time, you made an adjustment. You may have failed again, but each time you did, you were gaining experience that, with the right mental skillset and approach, would better prepare you for the next pitch.

The same approach applies to adversity. I was able to get early “at bats” with adversity.

Those early “at bats” were failures, but I was beginning to develop the right mindset to deal with the next pitch. We never become perfect at this, but what you must control is taking advantage of as many “at bats” with adversity as it reveals itself.

Why Adversity is Critical To Growth

“In this world nothing can be said to be certain, except death and taxes.” ~Benjamin Franklin

Benjamin Franklin was wrong. There is one other certainty: adversity.

We all face adversity in our lives. Adversity does not just show itself in dramatic ways, like cancer and car accidents. It also shows itself each day, in small ways, through highway traffic or arguments with our significant others.

Each adversity moment is a learning moment in its own right. We miss countless opportunities to grow because we don’t know how to appreciate and identify these moments.

Call it what you want: adversity, failure, struggle, obstacles, or barriers. Many of us are taught, at a young age, to avoid these things. Why? Because they are hard. Because our parents, and people who care about us, are hardwired to protect us from harm.

However, by avoiding these situations we are being harmed in other ways.

A multiyear study, published in the Journal of Personality and Social Psychology, surveyed 2,400 subjects who experienced negative life events.

These events included serious illness, violence, natural disasters, and other major moments. The study found that “those who experienced negative life events reported better mental and overall well-being than those who did not.” This is significant.

There is also a downside to adversity. Without the right supports or mental skillsets, adversity can cause stress, affecting decision-making and physical health.

Dr. Nadine Harris, founder of the Center for Youth Wellness in San Francisco, found that adults who were exposed to high levels of stress as children had higher rates of cancer, heart disease, emphysema, and significantly higher suicide rates.

We can control our response to adverse situations. We can turn them into opportunities. We just need the right set of principles to turn adversity into opportunity.

Mindset is the cornerstone—the keystone habit—to using adversity to your advantage. Mindset allows you the mental flexibility to find the seeds of growth within the (badly packaged) fruit.

Mindset is the first step—and the most important one—in getting everything right. Your mind sets you up for action. The right mindset is the infrastructure for sustainable growth through adversity. Without it, we are approaching struggle like a house of cards: Success can happen, but over time, it won’t last.

One can find the best case for mindset in Carol Dweck’s research. Dweck, a professor of psychology at Stanford University, had a simple question: Why did some kids crash and burn in response to failure when others embraced it and thrived?

What Dweck carefully clarified was that there were two distinct mindsets that set students apart—a fixed mindset and a growth mindset—and the research was conclusive: A growth mindset was seminal in facilitating personal growth, while a fixed mindset hindered potential.

The students with a fixed mindset didn’t believe they could do better. Each failure was devastating and demoralizing. And for learners, this becomes a problem.

On the other hand, a growth mindset actively encourages students to enjoy challenges and seek improvement.

This research reveals an amazing opportunity for us as human beings. In the face of failure, challenge, and adversity, a growth mindset gives us the ability to build and act on resilience. We can build mental strength to break through walls in pursuit of what excites us.

How to Take Action

Right now, you may be saying to yourself, “Sounds great Nick, but I don’t know the first thing about how to apply this in my life.”

I understand. Application is often the most important, but most difficult aspect to skill development.

Let’s focus on the power of “small wins,” thanks to Charles Duhigg in the The Power of Habit. This theory can help us reduce overwhelm and improve our confidence one step at a time. Here is one action step you could take today to start building or strengthening your growth mindset:

What does a fixed mindset thought sound like? Thoughts such as “What if I fail?”, “I’ll be a failure,” and “It’s not my fault; it’s someone else’s” are fixed mindset questions and statements.

The goal is to achieve consistency. With time, you’ll be able to develop the ability to catch yourself during a fixed mindset thought, reset, and apply a growth mindset perspective. Here is an exercise to identify your fixed mindset voice: record yourself for a day.

This may sound extreme. However, think about if you were trying to improve your finances. Your accountant or financial advisor would tell you to record your expenses over the course of a day, week, or even a month.

By performing this exercise, you are providing an unbiased record of all activities—some that you would remember anecdotally and others you wouldn’t believe you spent money on. Doing this inventory with your self-talk provides a sometimes scary but accurate look at how you respond to events during a day in the life.

Even if you do this exercise for a day, the goal is to start to develop an awareness of what your “voice” is. This provides us the opportunity to revise this inner voice with growth mindset thoughts, which then turn into positive actions.

Over time, you’ll hone this muscle, which becomes the foundation of approaching adversity when it shows itself.

No one’s perfect. I still struggle every day with applying the right principles. I try to remind myself that each day, and each step in our journey, is a chance to get a little better.

Best of luck with the next step in your journey!

Man with arms up image via Shutterstock

If you are interested in finding out more about The Game of Adversity, please visit this Amazon link to the ebook and paperback. You can sign up to receive the first two chapters absolutely free just by providing your email, at www.nickdinardo.com.