When You Feel Angry More Often Than Not
By Nanette Stein 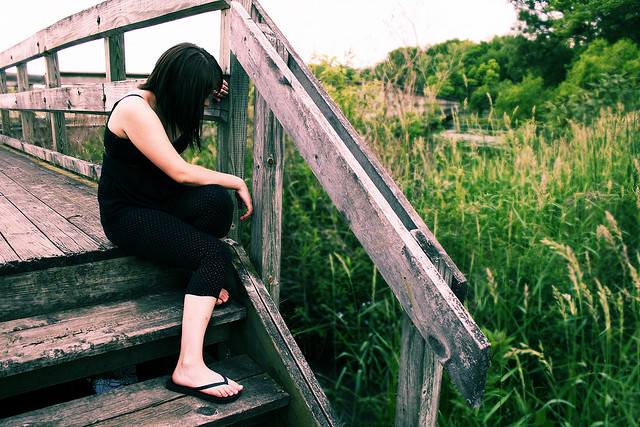 “If you correct your mind, the rest of your life will fall into place.” ~Lao Tzu

I spent a lot of time in my life being angry. At one point I hated everything and almost everyone. I had a saying for a while: “God, I hate people.” I hated the people driving in front of me on the way to the store, then in the parking lot of the store, then inside the store.

I hated my job. I used to love my job. It’s what I chose to do, what I went to school for. But then I started to hate it—the patients, the nurses, everything about it.

I can’t recall when the precise moment was that it began, this disgust of the world around me. I do know what I was disgusted by: the mindless selfishness of others. I was in total frustration of the way everyone seemed to be wearing blinders to the world around them.

I was so tired of the judgment and condemnation of others toward those different from them, whether it was race or religion, size, or shape (or that of their bank accounts). The arrogance with which they treated each other, the unfriendly way they regarded each other in public situations, the way I felt I was treated for so many years by people I encountered every day—at my job, within my family, out in public—by unsmiling faces of unhappy people trudging through their miserable lives.

Misunderstanding can cause a lot of contention.

I hated the way I was talked down to by other staff at work like I was less significant than them because they didn’t understand what my job title was (Registered Diagnostic Imaging Technologist, or X-Ray Tech), or that I was as educated as they were, or sometimes more so.

I hated the treatment I received from ungrateful patients who thought they deserved more than I could give. I was called names, screamed at, bled on, vomited on, defecated on, and had the occasional arm reared back in the threat of being hit. This while having to touch, move, and position these people and equipment, all while seeing and smelling the human condition besides.

Then, I would go home at seven in the morning, get a whopping six hours of sleep, if I was lucky, get up, go about my wifely and motherly duties of house-managing, dinner, and grocery shopping, where I was almost sure to be treated with righteous indignation by a disgruntled cashier who also hated her job (I would sometimes tell them to try my job and then complain), get a shower, relax for maybe an hour or so, and do it all over again, five nights a week.

What a life. And it was like this every day, in all aspects. This made me resentful of everything, including my family and myself. I just wanted to be left alone, and I wanted that piece of what I thought everyone else had, though I didn’t quite know exactly what that was.

I thought it was more money, a better house, definitely a better job. I was tired of seeing everyone else get rewarded while my situation was still so perceivably awful. There were so many things that I needed to fix in my life: the roof, the ceilings, the floors, the kitchen, the bathroom, the car, our finances, and my health.

I was so tired of myself. I needed something, desperately, and I knew it. I was nearing the combustion point and I desired a way out of the awfulness that I was feeling every day. There must be a light at the end of this infernal tunnel, I thought.

Then one day, while half-watching an episode of a popular female comedienne’s daytime talk show, I sort of perked up when I heard her introduce, quite seriously, a guest to her show who she spoke very highly of.

It was someone whom I had never heard of, Dr. Wayne Dyer. He was on to promote his book Change your Thoughts, Change Your Life, but it was more than that. He seemed to actually care how people felt inside.

I listened and I eventually bought his book (though I didn’t read it right away). Very shortly after that show, I was flipping through the stations and came across another popular daytime talk show, and paused there to hear what the guest on her show had to say. That turned out to be Eckhart Tolle.

Again, I was riveted. He was on the show speaking about his book A New Earth. A short while later, I purchased this book as well. This one I did read. I absorbed these words and thoughts and could not believe what I was reading. These were my beliefs, my understandings of the way things were.

I soon picked up his first book, The Power of Now. I have never felt such relief in all of my life. This was the chisel that cracked my wall of despair. In the meantime, Dr. Dyer had released the book Excuses Begone, another big help in my transformation.

Now, I am not a huge follower of any type of self-help movement. I’m not a faithful follower of any man-made religion, though I was raised in the church and have tried almost every religion out there trying to find a way to the “truth.” And I do mean every one.

I believe that whatever you believe, if it helps you to become the best you can be, then you are right, as long as it doesn’t make you start treating everyone else like they are wrong.

But this isn’t about religion; it isn’t about gurus, which these men do not claim to be. It’s about finding the path that opened my eyes to my own healing. And that path was in me all along.

I figured out what I hated.

I hated me. I was hate-full. I was full of contempt and dissension. Do you remember those people who I ”hated,” who I thought felt they deserved more than I could give? Who thought they were owed something? I was one of them.

When I used to have hateful thoughts and feelings, I would get more down on myself. But now? Now I allow the feelings, if and when they come, and I forgive myself for them.

I envelope myself with loving kindness, because I am human, and I will make human mistakes. And, because I can now love myself with kindness and forgiveness, it is only natural to love others with the same. I can now revel in the glow of others’ happiness and joy.

I still get low. I still get forgetful. I still have moments, sometimes each day, when I forget for a while the light that fills me.

I’ve had one detrimental summer with the tragic deaths of both my mother and my husband’s mother. But when I come back to my moments of clarity it is not with shock but a simple knowing that all is well, because the light is still there. Always has been, waiting for me to come back to it.

I realized that it is all about choice.

The power does not lie without. The power lies within you. You just have to know that you deserve it—happiness, peace, love, and joy.

I know it seems easy for me to say, but I went through it. I started my journey in 2008. I picked up those books; I read them, put them down, and sometimes reverted to my old damaged ways of thinking and doing. But something urged me back.

I believe once it’s in you it doesn’t go away. You just have to allow it to find you again—the peace, the connection to your higher self. With this connection comes a life of gratitude. For me, there’s no richer way to live.

Accept and Value Yourself: 11 Ways to Embrace Who You Are