Breaking Free from the Pain of Heartbreak
By JD KM 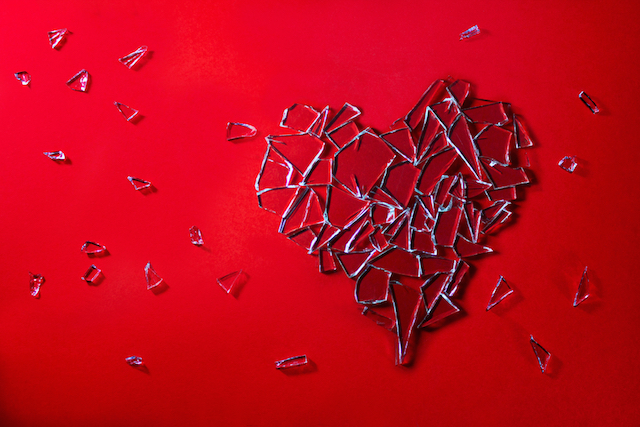 “Never be ashamed of a scar. It simply means you were stronger than whatever tried to hurt you.” ~Unknown

Heartbreak. I have never felt anything as torturous.

It’s been just over a year since my first real heartbreak, and finally, after more pain and tears than I can describe, I have started to move on.

The loss of a love you believed to be true can leave you feeling shattered. No matter how independent you believed you were, and how many positive things everyone else believes about you, you may feel like the better half of everything you know has disappeared.

This is what I felt. In the first few weeks after the breakup I could barely get out of bed. I would spend my time sobbing and convincing myself that the pain would never go away. How could it?

How could I have been so wrong about something I believed in with every inch of my soul? How could I continue living after I had found the person I was meant to spend the rest of my life with—and lost him?

I used to think of myself as a confident, outgoing person, but one single loss and I had not a shred of self-esteem left. And the thought of being around people and acting happy made me crawl back into bed and cry.

It hasn’t been pretty. Breakups and any form of significant loss deprive us of the sanity and rationality we would previously have been proud of.

Here are some things I had to learn about how to move past the abyss.

The First Few Weeks After Loss

Cry. Be sad. Feel the pain.

The best advice I got at this time—the only advice that actually helped, in fact—was that breakups suck, and there’s nothing you can do but give the wound time to heal.

At this point in time you are not expected to believe your best friend who is saying that everything is going to be okay, or your cousin who thinks it’s for the best. Eventually, these loving intentions will be priceless, but for now, just accept the pain.

Eventually, the pain will start subsiding. You will realize that your puppy did something goofy and laugh, or that there is a particularly lovely flower in your garden, or that your morning coffee actually tastes good.

Look out for these moments, as they will make you whole again over time.

When you realize that you can actually feel something other than pain again, even if for just a few seconds, try to become more observant. Start looking out for the beauty around you. There is beauty.

One of the positive sides of having your heart shattered into a million pieces is that as it comes together again, you can gain a new perspective on life.

Take a minute to observe the beauty in the simplest things around you, which you may have previously taken for granted, and you’ll be surprised at how much you’ve been missing out on. I sure was.

At this time your friends will start expecting you to get better and become the social bestie they miss. Don’t push yourself. It is okay to want to stay home and watch a movie instead of going out. You are the only one who knows what’s best for you.

Starting to Move (Crawl) On

At some point, something deep down inside of you will say it’s time to start moving on. Now it gets challenging! At this point, you should start to push yourself.

Be honest, and once you know it’s time, go for it. You don’t need to spend the night out partying—start slowly. Accept an invitation for a meal or a coffee date with a friend. If possible, make your own way there so that you’ll know that you can leave if you feel uncomfortable.

This step is crucial, but you won’t feel like doing it. My therapist (to whom I am forever grateful) practically had to supervise me as I made my first plans with a friend. It’s hard, but once you know it’s time, please push through.

It’s okay to go to the bathroom and cry in between the starter and the main course, and again between the main course and desert if you need to. Eventually, you’ll only need one break. And with time, you’ll start enjoying yourself again—as long as you take the first painful steps!

Months On—Should I Be Healed?

For me, the healing process took quite a while. About nine months in, I moved to a different country. My life was practically turned upside down, and every day was a new adventure with amazing new people.

I even met a guy who I had a short-lived, casual relationship with. Although there was nothing real involved, it was a huge pace forward considering that a few months earlier, the thought of being with anyone else literally made me sick to my stomach.

In spite of all this, I couldn’t stop thinking of my ex. We talked almost every day, and he was still a huge part of my life. I realized I was holding myself back and that I would never truly move on if I kept talking to him, so I stopped.

I still didn’t completely move on. Over the Christmas break I found out he was seeing someone else, and it felt like we were breaking up all over again. These feelings were amplified by the thought that I should have moved on by then. I was beating myself up for going back to that dark place, even though I thought I was healed.

Moving on from things that bring me down has become a much easier process, so within a couple of weeks I was feeling better. This time I also realized that I no longer had any interest in my ex.

Finally, I was free from the rollercoaster that had ruled my life for the past year.

If you’re at the stage when you feel you should have moved on by now, don’t make things worse for yourself by worrying about it. You will move on eventually. You can help yourself to get to that point but you can’t force it.

I was at a party yesterday, and for the very first time since my ex, I met a guy I actually liked. That kind of liking that makes you feel like you’re in high school again.

We smiled at each other across the room and blushed as we met. Nothing came of it, and I doubt I’ll ever see him again, but I’ve spent the day feeling grateful. I survived the darkest period of my life so far, and now my heart is smiling again!

What are you going to do today to survive and flourish?

JD loves travelling and learning. She graduated in economics but has always been fascinated by the way the human brain works, so she’s now studying psychology. She has recently discovered the power of mindfulness and gratitude, and has also discovered a newfound love for dogs after adopting her adorable puppy last year.

How to Come Out Stronger After Heartbreak