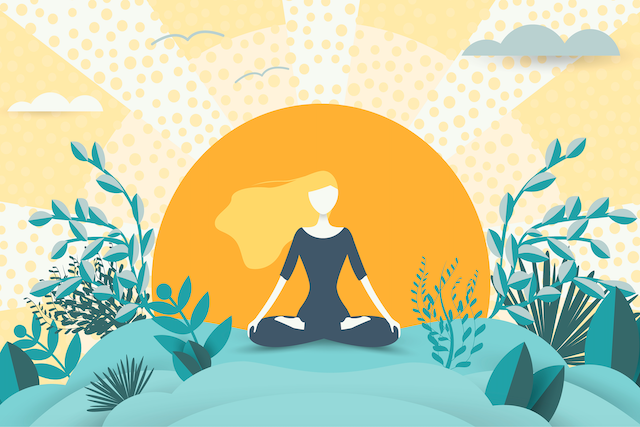 “The rose is a rose from the time it is a seed to the time it dies. Within it, at all times, it contains its whole potential. It seems to be constantly in the process of change; yet at each state, at each moment, it is perfectly all right as it is.” ~Timothy Gallwey

Have you ever wanted something so desperately that you became devastated after many failed attempts to get it?

Has the same pattern kept repeating itself no matter how you tried to change it?

Have you ever longed for something so deeply that you lost interest in life when it didn’t happen?

There was a time when I felt this way. I was at a total loss for what to do next.

I wanted just one thing in my life, and I knew it would make me feel happy and complete. But it kept eluding me. The harder I tried to achieve it, the further away it became. I felt repeatedly heartbroken and cheated.

I didn’t think I was asking for too much. Many people had what I wanted. I had searched for years to find it and thought I deserved it. What was wrong with me that I couldn’t have a normal life?

I wanted to find my soul mate.

I kept trying, but I kept falling in love with men who couldn’t commit. Each time, my boyfriend and I seemed so compatible. I looked forward to every hour spent together.

I could envision a life together, and my boyfriend seemed to be on the same track. But one day he would drop the bomb—“It’s time to move on.” I heard the excuse, “The timing is not right” so many times that I resented it.

After searching everywhere for answers, I kept hearing the same messages:

This contradicted everything I believed in. I’d always gone after what I wanted. It worked while I lived at home and at school. Why wasn’t it working now that I was on my own and the timing was right?

What Stops us from Getting What We Long For?

It’s not possible to have everything the way you want it. Too many other variables are involved—primarily what other people want. We all have conflicting wants and needs, and our desires are often thwarted when they conflict with what others want.

It took me a while to admit that I might be controlling. But we live in a society of achievers. People learn to go after what they want relentlessly, and that’s what I had learned.

With meditation, allowing is the only approach that works. Grasping pushes away the experience of peace. You must let go in order to sink into a state of meditation.

Next I learned something that was even harder for me to accept—the underlying reason that we try to control things. We do so because we’re afraid. We have deep-seated, often hidden fears about life. By trying to put our lives in order the way we want them, we feel more secure.

That idea took some serious introspection. But being honest, I finally had to admit that I was lonely and afraid of being alone.

That’s what made me so intense about finding the right mate. And my result was the same as that of the people who grasped to achieve meditation. I was chasing my potential mates away.

I was prematurely expecting each relationship to turn into a marriage and acting as if it was a given. I wasn’t being patient and letting things develop. It was too much pressure for the men in my life.

An Experiment That Can Change Your Life

After realizing I was suffering from the perils of being a control freak, I realized I had nothing to lose. Out of desperation, I decided to see what would happen if I had goals but let go and let things unfold without directing them toward a specific outcome.

At this time, I had also been laid off from my job, making things even harder because I viewed my career as the other part of my life that made me complete.

I started big by vowing to let my next relationship be decided for me. After all, my track record wasn’t so great.

I viewed this as an opportunity to start over without trying to control—without expectations—with less fear and more faith. I set my mind to believe that things would work out if I relaxed, trusted, and went with the flow instead of against it.

I began to follow Deepak Chopra’s advice of “being the observer” of my life. I calmed my fears by trying to be conscious that there is peace in the brief moments between our thoughts.

I began practicing meditation and yoga with a yogi who showed up in my life. I started walking for an hour every day with a girlfriend, Mary, who I’d just met in my company’s outplacement program. She had been laid off the same day I was.

My life changed markedly in a very short time. For the first time, I realized I didn’t have to be full of anxiety even if I was single and unemployed.

I checked in with myself and realized that in each moment I was okay. I could handle this. I could slow down, try to find the best course of action, and focus on how to change—how to be more relaxed by allowing rather than grasping.

I still had goals, but I started going with the flow and being open to other possibilities instead of insisting on specific outcomes I thought would make me happy.

Incredible Things Materialize When You Learn to Let Go

Although unemployed, I began to feel far less stress every day. It was like a weight had lifted from my shoulders. I hadn’t been happy with my job anyway, and it felt great knowing I could try something new.

As a result of meditation, yoga, and exercise, I was able to stop the depression medication I had been taking for several years.

I had tried to wean myself off of it before, but it didn’t work until I loosened up and started being open to this new way of life—experiencing the possibilities instead of directing things.

Surprisingly, I was enjoying this experiment. I felt like I was truly living life instead of holding the reins, hanging on, and being thrown off course emotionally when things didn’t go the way I wanted. I started seeing that great things were coming to me.

Dropping my fear let me experiment with observing what was going on around me and allowing things to unfold. I began to see openings and opportunities I never would have found had I kept trying to make things happen. It was like opening gifts.

For the first time in my career, I decided to start my own business. And instead of hooking up with another boyfriend, I found a group of like-minded friends who made me feel at home.

I found them by joining a group Mary told me about. They were studying a book called, “The Quest.” When she told me about it, I said, “That sounds like something I’m on.” It turned up at just the right time—and so did Mary.

It took quite awhile for the right relationship to appear, but in the meantime something valuable happened. I got to know myself better, and I grew immensely. I became comfortable in my own skin and even grew to love being single.

Later when I was happy with my life, I met my soul mate and husband, Mike, at a singles event. He is completely different from previous boyfriends.

I knew he was the type who wanted a commitment from the start. His eyes sparkled the first time we met, and he was genuinely interested to hear as much about my life as I was about his.

We have so many things in common. We share the same interests, we’re intellectually compatible, and we even like the same food and furniture. Where we differ, we are still compatible. It’s amazing to me how it all turned out.

There is no other way to know what it’s like to drop your expectations and go with the flow unless you try it for yourself like I did. There definitely is no way to trust it until you experience it working.

I’ve watched others go through similar disappointments in life trying to make things happen. Many of us are wired to pursue specific outcomes that we believe will give us security. If only we realized we could be happier if we open up and tap in to what comes our way while we’re busy making other plans.

Jan Tucker is an author, speaker, and yogi who helps people transform their lives by returning to basics, finding their inner balance, and living a healthier, less stressful life. She teaches the many “how to live” concepts of the full yoga path. Visit PerfectInnerPeace.com/ebook for a free subscription to her online magazine and the free e-book, “10 Ways to De-stress Your Life Permanently.”