Do You Define Yourself and Your Life Negatively?
By Samuel Gentoku McCree 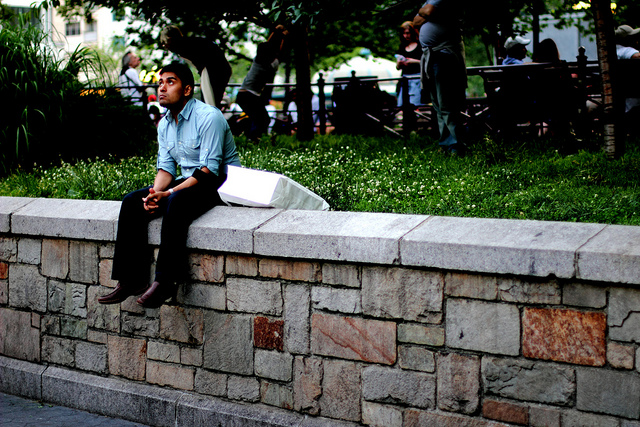 Growing up on military bases I learned to make friends quickly. My family moved a half dozen times before I was out of the second grade, so I didn’t have many other options. But while living on base it was easy, because all us military brats were in the same boat.

In third grade my dad retired from the Air Force and we went to live in a small town just south of Nashville, Tennessee. Once we moved everything changed. Instead of living with the sons and daughters of service families, I went to school with the children of the southern nouveaux riche.

Instead of making friends quickly, I struggled. I was teased and I developed quite the temper. I acted out in class and one day on the playground I tackled one kid and drug him several feet by his hair.

Though getting picked on was hard, what was worse was what I started doing to myself. But once I started, it was hard to stop. To this day this habit still haunts me in big and small ways.

Now, in some ways this was true. I was different from the other kids in ways. But my difference was situational, not inherent. I just didn’t realize that.

I thought there was something wrong with me. I took this thought and internalized it; I turned it into a story about myself, and then I told it again and again.

A Not So True Story

It became true for me, perhaps in the same way some of your stories have become true for you. Now I’m 32 years old and I still am afraid that I’m not likable. I struggle to make friends even though I’m social and outgoing.

I discount the friends I have and struggle to trust that they really like me. All because of this definition that I wrote for myself when I was in the third grade.

But I know it doesn’t have to be like this. I don’t have to live trapped by these old definitions. For all the definitions I still have I have overcome many others.

For years I was argumentative about everything. “Yes, but,” were probably the first word most people heard me say. Though I can still hold my own in a debate, I don’t feel the need to constantly object in every setting. In high school everyone you asked would have said I like to argue. But now people talk about how calm I am.

The same thing that makes defining yourself powerful is what makes overcoming it possible. The only person who decides how you define yourself is you.

Sure, people reflect that definition back to you, but if you stop doing it so will they. It’s not an easy thing to change, but it is changeable. And you can do it in 4 steps.

Start paying attention to moments when you define yourself. When do you stop and ask yourself if it’s really true? And what if it wasn’t true? How can I act in way that free’s me from this definition?

As you start to notice write down your own negative definitions. Getting them out of our heads makes them seem even sillier. It also helps us separate from them. When we create space around our definition we create the potential to change them.

Stop defining yourself in negative and limiting ways.

Stop being afraid to see yourself as brave, bold, and courageous.

Stop letting your old definitions limit who or what you can become.

Instead, tell yourself and tell the world what your life is about. Not by talking the talk, but by living it. Ghandi once said, “My life is my message” What kind of message do you want to leave behind?

Samuel "Gentoku" McCree is a Mindful Fitness thought leader, personal trainer, and mindful living coach from Portland, OR. He trained for two years at a Zen monastery, is an endurance athlete, and founder of MindFitMove. You can find his blog and a free Ebook on Your Sexy Brain at mindfitmove.com.

The Power of Perspective: A Simple Way to Ease Anxiety