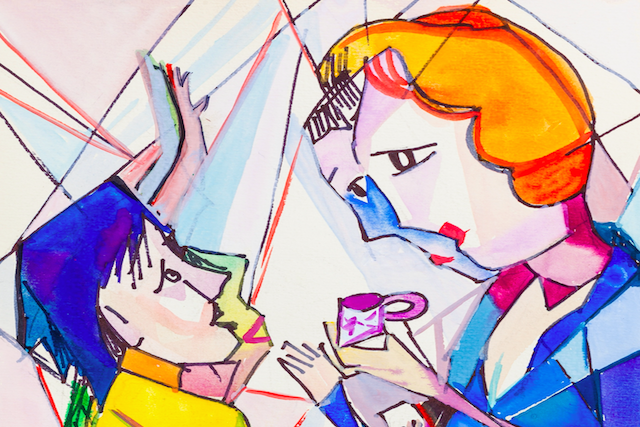 “The ability to apologize sincerely and express regret for the unskillful things we say or do is an art. A true apology can relieve a great deal of suffering in the other person.” ~Thich Nhat Hanh

My life has been full of apologies. I’ve been on both the receiving and giving end of the good, the bad, and the ugly apology.

Just recently a dear friend who I hadn’t connected with in a long time reached out and asked if we could meet for coffee. I sort of backhandedly blew her off and told her I would try to meet her later that same day. I had already made plans to run with another friend, but I chose not to share this.

After my run, I invited my running buddy to coffee and ran into my other friend. It was awkward. We hung out and all had coffee together, but there was an uncomfortable vibe between us the entire time.

Later that day I texted my friend, apologized, and told her I should’ve been honest about my reason for rejecting her invitation. Yes, you read that correctly—I texted my apology! Owning our mistakes is hard, and I’m working on getting better in this area.

Recently there has been a social media meme outlining the power of shifting our word choice from “I’m sorry” to “thank you.” For example, instead of saying “I’m sorry for being such a mess,” say “Thank you for loving me unconditionally.” This type of apology suggests that our word choice is powerful and that we can choose words that empower rather than degrade.

By definition an apology is an acknowledgement of an offense, failure, or disappointment. Anytime we are faced with having to apologize we either must acknowledge our own offense or step into holding space for another person’s disappointment. In our culture, we aren’t taught to do either of those very well.

On the other hand, apologies can be incredibly powerful healing tool connecting us to our own human experience, as well as other people.

An apology gives us the opportunity to practice humility and step into vulnerability and out of shame. So, the question becomes: How can we master the art of the apology in an effort to heal ourselves, our relationships, and the global community? Below I offer simple, actionable ways we can embrace this art.

No one wants to feel like they’ve been a schmuck, and as a result, we often try to turn the fault or blame back on to someone else so that we don’t feel the shame often associated with owning our mistake.

Mistakes and subsequent apologies are hallowed ground for so much learning, grace, and humility. When we shy away from these places, we stay stuck in our own pain and shame.

Recently I had an exchange with a friend after we had awkward conversation between us. My friend seemed upset and distant, but I didn’t know what had happened. After asking her what was up, she replied that yes, she was upset. She went on to explain what had happened to upset her and apologized for her bad behavior.

After hearing this I felt genuinely saddened about what she was feeling and began to understand why she had taken such a caustic tone with me.

Unfortunately, as quickly as she apologized she tossed it back onto me and said that it was my fault she had acted that way, and if it weren’t for me she wouldn’t have been so mean.

She used the “I’m sorry, but you…” apology style. Rather than create a space of mutual understanding and an opportunity for healing, she continued with the same caustic tone and pushed the responsibility for the situation back on to me. Naturally, I felt awful that, in her view, I was 100 percent responsible for her angst.

This posturing left very little room for any reconciliation without getting into a back and forth exchange of grievances. Not liking the options of taking full responsibility or continuing to engage in a ping-pong of blame, I thanked her for letting me know how she felt and moved on.

We are not required to engage in or accept a blame-based apology. We can simply, and in love, move on. On the other hand, if you find yourself using the “But, you… apology,” realize that you could be damaging a relationship by staying stuck in your own ego’s need to be blameless.

When an apology is followed by a “but” and an explanation it negates the apology and doesn’t feel genuine or as if the individual is invested in seeing the opportunity to resolve, Rather, it seems they’re trying to shun any responsibility they have in the situation.

The “explanation apology” is similar to the “it’s you, not me apology,” but rather than shifting the blame to another person, we offer excuses or try to explain all the reasons our apology is good enough. It often comes from a place of feeling ashamed of our humanness.

For example, I think most of us can relate to saying things we don’t mean when we’ve been drinking. Many years ago, when my husband and I were just dating, we got into a booze-infused argument, and I called him a nasty name I typically reserve for my ex-husband. Even in my tipsy state I could see the hurt in his eyes. I felt so ashamed, but at the moment couldn’t bring myself to apologize.

The next day I apologized and let him know that’s not how I felt about him. It would have been easy to explain why I had said something hurtful by blaming the booze or a variety of other things that would take the spotlight off my own careless words. I decided instead to own my bad behavior, and it was humbling, but owning it planted the seed for a healthy relationship to grow.

Mistakes are part of the human condition. Noticing when we are defaulting to feelings of shame for our humanness by either excusing or avoiding saying sorry can help us grow into more compassionate people. It can become a beautiful opportunity to reclaim our right to be human and make slipups.

If you do feel compelled to add something to your apology, perhaps a statement that affirms the other person would be a kinder choice.

When It’s Not Necessary to Say Sorry

Earlier I mentioned the popular social media meme going around suggesting we trade our “sorry’s” for “thank you’s.” This enables us to shift from guilt to gratitude in situations where we’ve done nothing wrong.

I have been a yoga teacher for many years, and it’s industry practice to reach out to another teacher and ask them to sub your class. One time a fellow teacher called to ask if I could sub for her. Unfortunately, I wasn’t available, so I apologized and began listing off all the reasons I couldn’t help. I felt guilty and thought I needed to defend my answer.

In retrospect, I realize I could have simply said, “Thank you for thinking of me. I’m flattered! Unfortunately, I won’t be able to teach for you this time, but hopefully I’ll be able to next time!”

Noticing what you’re apologizing for and when is a beautiful way to bring mindfulness to our everyday conversations. It also helps us keep apologies for the things we do that genuinely require regret.

At the same time, it gives us permission to give ourselves a break. It can be easy to get in the habit of beating yourself up and apologizing for everything. Intentionally setting the tone of a situation to be one of grace and kindness can elevate the consciousness of the individuals and allow both parties a breath of relief in acknowledging the imperfect perfection of any moment.

I was having this discussion with the female inmates I teach yoga to once a week, and they recognized how empowering it felt not to own things that result in them immediately feeling dis-empowered, the victim, or bad person of a situation. They could see how insignificant apologies were keeping them oppressed.

When we find ourselves in the position where an apology is the best choice, there is no replacement for the two simple words: I’m sorry.

Stopping at these two simple words prevents us from coming from a place of pride and ego, and it gives the other person permission to simply feel whatever it is they are feeling without us trying to soothe it or fix it.

Instead of being shamed by apologies or letting your ego get in the way of an opportunity for growth, I encourage you to see these as sacred opportunities to embrace the human condition and help heal yourself and others.

The Power of Apologizing: Why Saying “Sorry” Is So Important