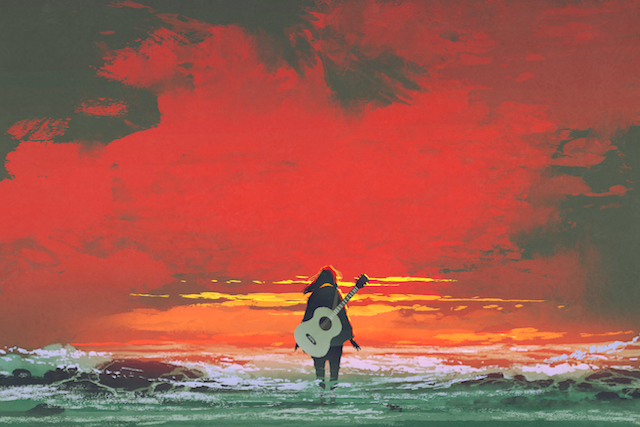 “Don’t be pushed by your problems; be led by your dreams.” ~Unknown

For years I felt nothing.

Nothing, that is, except bored at work, trapped in my marriage, uninspired in my educational pursuits, misunderstood by friends and family, and stuck in my hometown. I’d lay awake at night wondering what was wrong with me.

How did I manage to manifest the exact scenario I’d been trying so desperately to avoid?

As I reflected upon all the major decisions I’d made up until that point, it didn’t take long to realize what had happened: I’d spent so much time focusing on what I didn’t want that I’d neglected to figure out what I actually did want.

I’d been pushed by my problems rather than led by my dreams.

This realization was both unacceptable and intolerable, and sent me on a quest to uncover who I was and what I actually wanted in life. Once I had a clear vision, I began taking action.

That was more than three years ago. My life today is much, much different.

For the last six months I’ve been driving around the United States, living out of my car, and couch surfing with friends and strangers. This adventure was just the icing on the cake of a three-year stint living out of a suitcase and traveling around the world.

Long gone are the restless nights, self-defeating thoughts, and dull emotions. The words “play” and “work” have become synonymous; my interpersonal relationships are now fruitful and plentiful; I’m inspired and motivated to learn as much as possible; and I happily refer to the world as my newfound hometown.

Believe it or not, the process of how I re-created my life started with a few simple changes. One of the biggest changes I made right from the beginning was with the way I speak.

Words are powerful and they carry energy. While they can be used to manifest massive growth and positive change, when used unconsciously, they can just as easily aid in creating a life we never wanted.

To start creating the life of your dreams, eliminate these five words from your vocabulary:

As I started to explore all the reasons I wasn’t taking action in my life, I quickly came up with a laundry list of “should” statements.

“I should be happy in my marriage.”

“I should stay in this high paying job.”

“I should feel understood by my friends.”

The word “should” gives you an easy way to avoid going inward; it’s often used in statements that are based in fear.

For example, if there was no “should” regarding my marriage, that meant I suddenly had no excuse for why I wasn’t taking action; it also meant that I had the freedom to make changes, which was both liberating and terrifying.

Ask yourself why you aren’t taking action in your life, and for every “should” you come up with, explore what would happen if you actually did make the change. Once you maneuver through any guilt and shame, you’ll find a little seed of fear.

Nurture that seed because when you overcome the fear that planted it there, you’ll start moving forward in the direction of your dreams.

Many years ago, I was told that every time you hear someone say the word “but,” you can erase everything they said leading up to that point, because none of it is true.

Just be honest with how you really feel; there’s no need to sugarcoat things. If you don’t have any intention of quitting your job, stop saying why you “would if you could, but you can’t,” because the minute you really want something, “I would” becomes “I will,” without the “but.”

Being honest is a critical step toward manifesting the life of your dreams.

The word maybe indicates a lack of clarity and fear of commitment.

“Maybe I’ll start my own business.”

No, you won’t, and if you do, the energy behind your decisions still isn’t firm enough to manifest your dreams. Figure out what you want and start making clear and succinct statements about it. Declare your intentions to the world without an ounce of wavering in your voice.

When people used to ask what I wanted in life, I used to respond with “I don’t know,” and at the time, I thought that was the truth. Then one day, a friend challenged me and said, “Yes you do. Try again.”

The truth is, he was right; I knew exactly what I wanted. I wanted to volunteer in Brazil. I wanted to take a road trip around the United States. I wanted to leave my job.

We all have an idea of what we want in life. Saying “I don’t know” is just an easy way to avoid the hard work of clarifying our vision. It becomes a statement that enables us to stay “stuck” in our lives.

So whenever you catch yourself saying, “I don’t know,” go deeper. Even if you don’t have all the answers, somewhere inside of you there is a little pearl of wisdom just dying to propel you in the direction of your dreams.

When I began telling people about the changes I wanted to make, I started to hear about all the things people “can’t” do in their lives.

“You can’t leave your PhD program!”

“You can’t spend your life traveling!”

What I quickly realized was that I was telling myself those same stories. There seemed to be a constant stream of “I can’t” running parallel to all the things I wanted in my life.

But then one day, I decided to look the word “can’t” right in the eye and call him out with a simple question: “Oh really? Why not?”

For the first time, I started to challenge all the things people were telling me I “can’t” do—all the things I was telling myself I “can’t” do. What I uncovered was that the only difference between what we can and can’t do is our belief in what’s possible.

So whenever you hear the word “can’t,” take a step back and affirm, “Yes, I can!” Then create a list of all the reasons that you will.

These shifts in the way you speak can serve as a huge catalyst toward manifesting the life you want. Dare to use words that solidify your dreams rather than those that perpetuate your fears.

Then watch the magic unfold.

I made these shifts over three years ago, and my life has been one big adventure ever since. Won’t you come join me?

Victoria Gigante is the co-founder of The Higher Purpose Project. She has a free e-course, 21 Days to a Daily Practice, on her website, a book, 365 Daily Practice Prompts, and a podcast called Empower Yourself. Follow Victoria on Twitter @VictoriaGigante and communicate with her directly on Facebook.

Taking Back Our Dreams: Releasing the Drive for Wealth and Status

A Simple 3-Step Process for Reaching Your Dreams