Ending a Toxic Relationship: When It’s Time to Say “No More”
By Anonymous 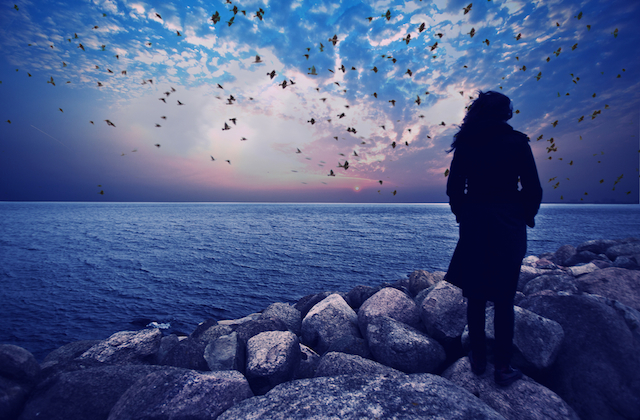 The day finally came when my heart was strong enough to speak up.

I had spent many years trying to be the calm, sensible one. The one who would try to rationalize my sister’s behavior just to keep the peace.

For years the strategy was to keep everything in its place and accept what was said, done, or requested. The day finally came when the weight of accepting the burden was too much to bear.

No amount of talking would convince my sister that I was being reasonable. It had to be her way. It had to be acknowledged that I had somehow erred, when in fact it was her very own thoughts that had caused her pain.

So, no more, I decided then and there.

“I am done. We are both far too dysfunctional to be in each other’s lives. I wish you all the best… You can blame me…This is what I want.” With those words I gave up on our relationship.

The feeling of freedom rose. The confidence from finally taking a stand was a trophy I now held proudly. “Well done!” I cheered. I no longer had to deal with accusations. Hooray! I was now in charge. I was the creator of my life.

Then, ever so slowly, it started to shift. Ever so gently the doubts crept in. Old scripts started playing. The mind was reverting back to old default programs.

We had both suffered as children. Our parents had been abusive in many ways. We never told anyone what happened in our home. We believed we had to protect our parents.

I became the surrogate parent. We both accepted that our parents did not know any better, doing to us what had been done to them. We allowed them to continue in our lives as adults.

My sister was the first to end contact with our parents. I was convinced I was enlightened enough that I could save them. All that ended the night I found myself terrified, at a police station, explaining why I thought my father was about to come to my home and hurt me.

That was an end I could justify. I had to find help to get through the flood of emotions that threatened to drown me. Among the consolations was the fact that I still had my sister. Nobody else understood what we had gone through.

Now, however, I began to doubt my bravery. My sister and I were supposed to be there for each other until the very end.

I saw myself as abandoning my sister. How could I have been so mean? How could I just end it like that? I was a terrible person!

The pain was intense. The anger, the hurt, the bitterness all began to choke my life. Overwhelmingly, they tortured my soul.

Years of buried resentment began to rise up like icebergs slowly breaking the surface from their depths. The feelings, once anchored to my core, were now exposed to reveal infected open wounds.

I cried. I screamed. I read. I meditated. I yelled. I punched. I got angry. I journaled. What was wrong with me? I had always held it together. To witness myself unravelling was terrifying.

Dark and ugly thoughts plagued me. Driving was now an opportunity to vent. I was safe in my car; I could blast my horn, I could utter every imaginable swear word, and I could find fault with every driver’s technique.

I was a person possessed by anger and looking for a way to punish.

My daily meditation seemed to go nowhere. I connected to the universe. I begged for help.

I had persevered with the early morning practice for months, when one morning I suddenly realized that my sister was no longer the first thought of my day. That was new. Then ever so slowly, other thoughts began disappearing.

There was a gentle loving energy helping me to create new thoughts to replace the old. I was okay. I am okay. Everything will be okay.

It was an inexplicably subtle process that I was convinced was not working when, on another ordinary day, I realized I was waking up okay.

Realizations began emerging. It was fair for me to end the discussion. No amount of talking was going to change my sister’s mind. Years of role-playing had created an expectation that I was to be at fault.

By speaking up, I was positioning myself as a priority. I was no longer willing to rate myself last. I deserved better, and I now saw that I had made the perfect decision for me.

Another realization soon came to mind: “You can blame me.” Those were the words I was most angry about. Those words came out of my mouth. I was mad at myself. I was mad that I had given my sister a reason to ignore her role in our story.

That had always been my go-to solution. Take on the blame to keep the peace.

When that was done, everything would go back to the way it was. We could live a fantasy life of closeness, all the while not realizing that I was slowly breaking my own heart.

I had wanted my sister to love me and to make me feel important and needed. For this I had paid an expensive price. My sister, I realized, played her role to perfection in allowing me to wake up to this truth.

A few weeks later another realization came to mind: Silently, we had both blamed each other for parts of our pain. We were two damaged souls trying to live our lives with massive wounds in our hearts.

I realized that I was not a terrible person for making a decision that was in my best interest. No one should be given an automatic pass into your life, regardless of their title.

It is actually a privilege that should be honored and treated with respect. The lesson may be painful, but if you find some way through the hurt, a better future awaits.

Each new morning brings a little more light. The universe continues to coax me to take another step away from the ledge of my past. I realize that the heartbreak I felt was a dissolving of me into a million tiny molecules before the gentle re-sculpting of those atoms into a more open and peaceful me.

Woman on the rocks image via Shutterstock