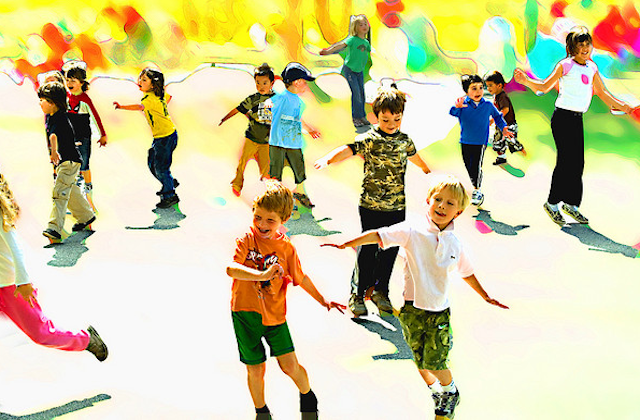 “A healthy attitude is contagious but don’t wait to catch it from others. Be a carrier.” ~Tom Stoppard

Just the other day, I was at my daughter’s school to watch her participate in a spelling bee. As the kids came into the room, I took notice of their manner and their faces.

They looked excited, frightened, and some, decidedly uninterested. The teacher led them over to their area and promptly told them to sit on the floor, in two straight lines, and no talking please. They complied.

Some kids pushed at the others to “move over!” Some held their fingers to their lips, loudly shhhhhshing the others. Some opened their notebooks and began to draw or write. Some spoke quietly to the friend next door.

I smiled as I watched them; some caught my grin and smiled back. I wondered if adults would have fulfilled the teacher’s request so quickly, and with relatively little complaint.

How many would have continued talking, ignoring anyone imploring them to quiet down? How many of them would have busied themselves instead of complaining, “This floor is hard, how long is this going to take anyway?!”

And I wondered how many of them would have spoken to the people next to them as if they were their best friends instead of judging, sizing up.

Once the spelling bee was under way, I paid close attention to the children in the room. There were four classes participating, with what must have been around 100 kids on that cold, hard floor.

The children on stage were doing great.

Some of them struggled with a word here and there but managed to put all the letters in the right order. And when they did, their relief and pride in themselves was more than evident. They slapped their foreheads, dramatically wiped their brows, knees buckling as they pretended to faint punctuated by laughter and camaraderie. They cheered each other, congratulated each other, consoled each other.

What of those adults? Would they be willing to slap their foreheads? Pretend to faint? Laugh and shrug their shoulders when they messed up?

What about that camaraderie? Those kids all cheered each other. It didn’t matter whose class they were in, how good or bad a speller they were. It just didn’t matter. Adults won’t speak to you if you’re on a different team.

Maybe I’m being too hard on the adults. I’m sure there are some of them who’ll stand up on life’s stage, give it their very best shot, and maybe win—then pretend to faint, or jump up and down arms waving yelling, “I did it!” Or lose and shrug their shoulders, knowing there will be another chance, or run into the arms of a friend for consolation. But I think they are few and far between.

Composure—looking the part for the other eyes—that’s the important thing.

Take all that sadness or elation and put it away now, my goodness; how old are you? Don’t you know that when you win you’re supposed to look sheepish, uninterested?

I stayed with my daughter for the better part of that afternoon, following the children as they headed out the door for Physical Education. Once there, they were told to sit down, this time on the concrete. They did.

I sat down right there on the concrete with them, and they looked at me a little strangely. Then they listened intently while the coach explained the rules of the game they were about to play.

When he was finished, arms shot up in the air, shaking crazily, bursting with the fire of the questions. What if…? When does…? Who goes…?”

They asked all their questions until satisfied that they understood. The game was underway. I watched. Some cheated; most played fair. They came back off the court to their spots on the ground exhausted, sweaty, giddy.

For about a second, some were angry their team didn’t win. But they didn’t dwell. I laughed with them, told them they did really well, and asked if they had fun. They responded with a resounding “yes!” I sat cross-legged, just like them, absorbed the energy, and contemplated the attitude.

How would I have participated, I wondered. Would I have raised my arm and asked questions? Would I have given it all I had and collapsed on the ground afterward? What, as adults, do we do to get exhausted and giddy?

After that day I looked around at the adults I encountered. This is what I saw:

Some were well dressed, on their way to work or a lunch break, talking intently on the phone or rummaging through purses and wallets.

Some were driving, staring through the windshield, maybe thinking about the mortgage payment or the kids or Mom and Dad or how much it’s going to cost to fix the hot water heater.

Some were standing in line, checking their watches, rolling their eyes, seemingly counting the number of items the person in front of them had.

Some were at the park, watching their kids play soccer, looking stressed and yelling, “Kick it! Move up! Go! Go! Go!”

Where did our little kids go, I wondered? Where did that elated, excited, play the game because it’s fun, run in the rain, catch the drops on my tongue, ask all the questions I need to, hug my best friend and tell them I’m sad person go? Can it be I’ve grown up too much? Have all of us?

If the next time we’re sad, we grabbed a friend and sobbed into her shoulders? If the next time we sit next to someone we don’t know, we asked them what their favorite color is? What would happen if we danced any way we wanted?

So what am I going to do the next time? I hope I’ll be able to find the inner child I raised into an adult and give her a voice, an arm to wave, and a song to dance to.

But for now, I’m going to sit on the floor and color.

Diana Reed is a yoga teacher, health coach, and life adventurer. She spends her free time kayaking Florida’s beautiful rivers, walking her canine companion, and writing her heart out. Follow her blog at dianareedearthandbodyproject.wordpress.com.

Finding a Window of Opportunity When Life Closes a Door