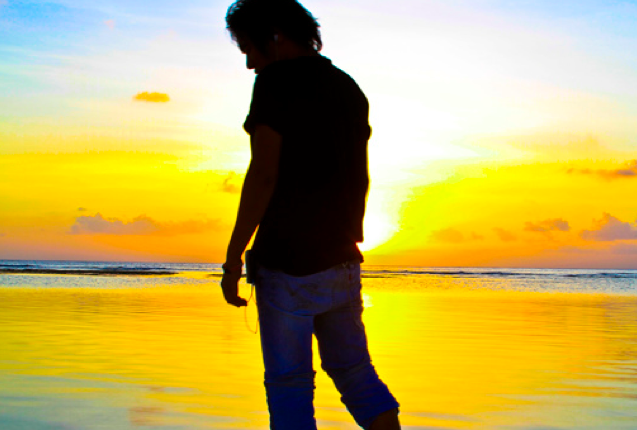 I made it my New Year’s resolution to forgive someone for his past actions. Unfortunately, he’s not here to know.

My dad passed away from cancer last September. There are times I miss him a lot; other times, it’s nice to have peace in my life.

We never got along. My mother and others told me it was because we were too much alike, but I knew that was not the case.

That’s just something outsiders say when trying to simplify your relationship.

Besides being extremely difficult to get along with, my dad had extramarital affairs, which I knew at an early age. I’m very close with my mom, so I took it personally. I was not going to let anyone hurt my best friend.

My dad denied everything, but that didn’t release these feelings that I had inside me since I was a child.

In August 2010, my father was diagnosed with head and neck cancer. He was self-sufficient for the first eight to nine months of his sickness, but in June 2011 he had to get a major surgery that left him totally dependent on his family.

Since my mom worked full time, that left me to care for him. I knew I could put our past behind us during this time, but he couldn’t.

My father didn’t want my help and got increasingly mad at me throughout that summer. He yelled at me for everything, and he threw glass at me. He treated me like garbage when all I wanted to do was help.

Before his death, he wrote me a letter. At this time he was very ill with cancer, so the letter didn’t make sense. However, I still believed there were some truths in there. He told me he was disappointed in me, which felt like a dagger in my heart.

It took me time, but I realized not everyone wants help.

I wanted to curl up in a ball and never come out.

After his death in September 2011, I looked through his camera to look at all the old pictures he never got developed. That’s when I found pictures of him with another woman. I tried to contact that woman, but she wouldn’t answer my calls or emails.

I was so hurt and angry that I started becoming a cynical person. I thought everyone was out to betray me.

It took me some time, but I learned it was because my past was affecting my present and I couldn’t let go of it. It was consuming my every thought, my every breath.

I hated what he did, and I hated that woman. Except those emotions didn’t help me. I had to learn to move forward and forgive.

It was not easy because not only was my father a cheater, he also was never that nice to me.

However, I knew forgiving him meant freedom for me. I felt for what I went through, I deserved to feel at peace.

These are some of the realizations that helped me come to this point:

1. Take time to make your forgiveness real and meaningful.

Did you ever hear someone say, “You have to forgive her!” or “Forgive him right now!”? Well, anyone can just say they forgive someone, but it takes time to actually move forward and truly forgive.

Don’t let a person force you into forgiving someone before you’ve worked through your feelings, because this would lead to an empty forgiveness, not something that’s true.

This is extremely important, because it’s so easy to get caught up in emotions when there’s so much extra chatter or other influences. When you meditate, you are at one with your emotions in a quiet atmosphere. During meditation, I learn more about my needs and myself, and it constantly helps me grow as a person.

3. Write down your emotions and then release them.

Sometimes it’s hard to realize what upsets you. Is it because she said this? Or because her actions made you feel bad? Writing down your thoughts help you better understand your feelings. After I do this, I like to go outside and burn the paper. It feels therapeutic to watch something that hurt you disintegrate into little ashes.

4. Instead of focusing on how someone else hurt you, focus on how your actions affect others.

When I was dealing with these issues, I wasn’t an easy person to be around. I spent too much time focusing on someone and something that I could do nothing about instead of focusing on the good and peaceful relationships in my life.

When I realized how I was treating my loved ones, it made me want to forgive the person who hurt me. I deserved that peace, and so did my friends and family.

5. Strive to live in the present.

This is the hardest thing to do. Especially now with the Internet and a fast-paced life, so many of us are multi-tasking, thinking of our next assignment before we finish with the one we’re currently doing. By always thinking of tomorrow, we are losing today. The same goes for living in the past. If you let your past define you, you will never grow.

Through all the pain and the heartache I went through for twenty-four years of my life, I finally feel at peace. I think the best thing I ever did was forgive my father, because it let me grow as a person and focus on all the wonderful people and things in my life.

I also have to thank my dad because he gave me this amazing life to live, taught me many valuable lessons, and showed me how strong I truly am.

Who do you need to forgive, and can you start doing the work today?

Aly Caracciolo is currently working on her master degree in English Education at Molloy College. She is learning everyday to show love and compassion to all and create a better environment.