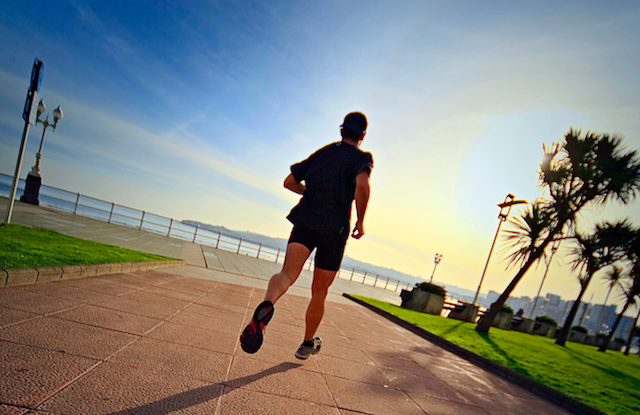 “It is better to make many small steps in the right direction than to make a great leap forward only to stumble backward.” ~Proverb

Seven years ago I was a sedentary, over-caffeinated, unmindful, somewhat neurotic meat-eater with a bit of a drinking problem. My meals came out of boxes with chemical compounds for ingredients and had little in the way of anything that grew outside or came from a field.

I made excuses for not exercising, but in reality I was so insecure that I didn’t think I was strong enough to be athletic. I was afraid of making an utter fool of myself. And I was afraid that if I sat still long enough to look inward, I would loathe myself more than I already did.

Today I am a mostly vegetarian running nut. I’m always training and gaining strength for the next race. For the most part my meals are fresh and made from scratch, containing less animal meat and more leaves.

I still indulge in coffee and Coke, but find comfort and clarity in tea and a glass of water. I meditate regularly for my spiritual practice. Mindfulness is a part of my everyday life, and wine is no longer a stress-reliever.

There are countless Cinderella stories like these out there, stories of couch potato turned to vegan Ironman, stories of people who turned terrible habits into wholesome ones. People who lost weight, kicked an addiction, stared their fears in the face, and made their lives better.

But for people who are still in the Couch Potato Stage, these changes feel astronomical. You may as well ask them to leap across the Grand Canyon and land on the other side on both feet.

So how does a person go from being a lump to a marathoner?

I did something quite simple that anybody who wants to change their life can do without stumbling and feeling like a failure.

Each day, I made one small decision to make a healthier choice.

Each choice was manageable. Rather than making grandiose plans to alter my diet and routine in massive ways, I made one small choice every day to make my life healthier.

This slow change began seven years ago, when a small idea was planted in my mind and began to grow.

I realized that my diet depended heavily on processed food. I needed a Chemistry degree to understand what I was putting into my body. By watching an ex-boyfriend in the kitchen, I learned how to cook.

Then every Sunday evening, I cooked a nice meal for myself, nothing too fancy. I became curious about different recipes and new foods. I soon found sanctuary in chopping vegetables, the aroma of fresh herbs, and gently simmering a sauce.

I felt a sense of accomplishment in creating a nutritious and tasty meal, and before long I was cooking for myself three to four times a week.

I was still eating meat, but I was eating a lot less of it, and fruit was a regular snack.

You don’t need to completely change your diet. You just need to start with one healthy choice.  Every small choice adds up.

After changing my diet, it took another three years to change my level of activity. I was going through major stress at work and in my personal life. I felt I needed intense physical activity that burned off pent up energy. I didn’t want to spend a lot of money on fancy equipment, so I started running.

For a long time I wanted to try running, but I was afraid that I would look stupid. One day I thought to myself, screw it—everyone feels stupid on their first run.

On a quiet Sunday morning, I went on my first jog/walk. I felt so amazing that I bought a decent pair of running shoes. I haven’t stopped running since.

That single choice to simply try exercise has lead me to three half marathons, a marathon, and a relay race. Running has helped me face myself in ways that I never imagined and find strength I didn’t think I had.

You don’t need to run a marathon today, or even a mile. You simply can make the choice to do something, no matter how small, to be physically active.

Around the time I started running, I also tried meditation. I heard accounts of the benefits of meditations, such as reduced stress and clarity of mind, but I was afraid of finding what was hidden deep inside of me.

I chose to simply try it. I sat for periods of ten minutes a few times a week. After trying that for a couple weeks, I felt like I needed guidance. So I searched for meditation services in my community. My first time sitting meditation at the Zen center, the silence and stillness of meditation brought me ease. I kept going back.

I now use mindfulness and meditation as a regular part of my spiritual practice. It takes a lot of work to see my fears as they truly are.

I’ve worked through jackal voices that tell me I’m not good enough. When I sit meditations, the stillness shows me that those are just voices and that they’re trying to protect me from life’s disappointments. And what keeps me going is the awareness that I don’t have to have all the answers right now.

You don’t need to meditate for hours at a time. All you have to do is sit in silence for a few moments each day to be more peaceful and present.

Each moment, you have an opportunity to make a choice. You can choose the same harmful habits that you always choose. Or you can choose a better habit that treats your body the way it deserves to be treated.

Recognizing that this was a destructive habit, I reached a place where I was ready to let go of my dependence.

I came home from a visit with my family (the side that doesn’t drink), and I was already on a five-day hiatus from drinking alcohol. Five days became six and then seven. I still struggle with those urges, but then I ask myself, what choice do I want to make?

Jane Endacott is a writer, blogger, and self-published author living in Portland, Oregon.  She coaches non-writers who aspire to become writers and writes for her blog Word Savant. She’s publishing a novel in Spring 2014.