The Benefits of Flying Solo: Why I Took Time to Myself After My Breakup
By Laura Yates 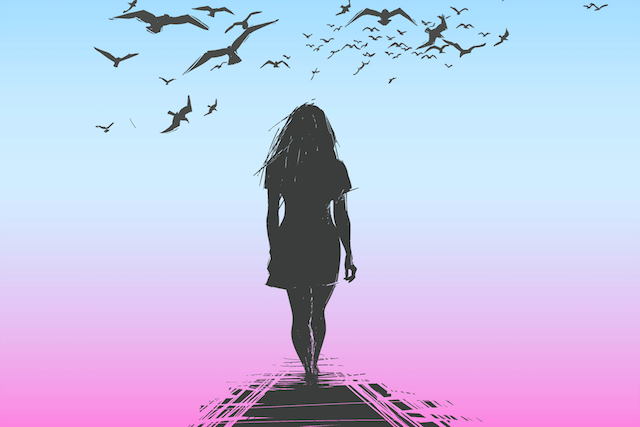 “Don’t let past relationships ruin your future happiness. Scars remind us of where we’ve been, not where we are going.” ~Unknown

I believe that the breakdown of relationships can lead to some of the most powerful lessons we learn in life.

When someone who we’ve been close to suddenly steps out of our lives, it can leave a huge emotional void. It can conjure up feelings of loneliness, vulnerability, anger, sadness, fear, and hurt, and the natural reaction is to go on a desperate mission to fill that void.

My relationship recently broke down. It was my choice, and though it was a difficult decision, I left it somewhat hurt but with an overall positive and empowered feeling. There has still been a void, though.

Despite me feeling strong, independent, and grounded, it somehow left a need for me to seek male approval elsewhere to prove that yes, I could in fact do better than the man I just ended my relationship with.

That I could “get back out there” and make the most of my new found single status, and better still, that this would be fun and all it meant was opening myself up to new opportunities.

So I hit the town, and before I even began to unleash myself to the male species, I felt a massive sense of underwhelm. Something was missing. It wasn’t my ex-boyfriend, it wasn’t a man in general, and it wasn’t a lack of confidence or assurance. I didn’t feel damaged or vulnerable.

What was missing was a connection to myself.

The week that I made the decision to get back out there was the week that I felt in complete disarray and simply used the idea of dating as a distraction because I thought, well, that is what I should do.

So, the following week, here is what I did instead:

Thought about why I ended my previous relationship in the first place.

Lack of respect and lack of being heard were two major factors. I wanted to be respected as an individual, so being an individual is what I needed to focus on.

The whole time that my relationship was causing me stress, I hated the way it distracted my focus from the things that really mattered—building my business, sleeping, indulging in my passion for music, and eating properly as examples.

So it was important that I acknowledged that those were the things I needed to bring back into balance as priorities before someone else could even enter the picture.

Got centered and connected with myself.

I did this by meditating, reading, and opening myself back up to spiritual teachers. When I listened to my intuition, I discovered that I didn’t actually want to be out hitting up the town; I wanted to spend some quiet time inside and alone, reconnecting, being good to myself, and getting clarity on what I really want.

People say that you shouldn’t spend time inside wallowing, but I think there is a definite need to spend this quality time alone before you even start thinking about dating.

I did nice things for myself.

Baths, candles, shopping, working out, eating well, sleeping, pampering—because although the main thing is to feel good on the inside, it certainly doesn’t hurt to feel great on the outside too! I also made time to work on my new business with a refreshed mindset.

Yes, he may have hurt me, but holding onto that makes the intent of finding someone “better,” who won’t hurt me even more prominent. This really isn’t the end goal.

When you forgive, you let go, and when you are ready to move on, even if that isn’t in the not too distant future, you won’t be clinging onto that messy stuff from the past. You’ll be going into dating or a relationship with open and renewed energy.

The end of relationships will always be hard, but they provide an amazing opportunity to realign with yourself. It made me really think about what I want from life, what I don’t want, the types of people I want to be around (and the ones I don’t!), and the kind of person I eventually want to be with.

It’s great to get back out there and have fun, but honestly, when it comes to getting back into dating before you’ve had time to bring the focus back to yourself, people can spot it a mile off.

When you get into that clear frame of mind where you’ve let go of all the bad energy from the past and when you’re content and striving toward your personal goals, you won’t feel the need to get back out there with such force. It will happen naturally.

It’s a big ask to expect someone else to be solely responsible for our own happiness or self-worth.

When we truly know that we don’t need someone else in order to feel happy, complete, or loved, we open ourselves up to the best kind of love someone else can give us.

Laura Yates is a coach and mentor from the UK. She believes that when you give yourself permission to step towards what you love, amazing things happen. Visit her at laurayates.org.