Go Do: Let Go of the Past and Future and Live in the Present
By Jenny Bowman 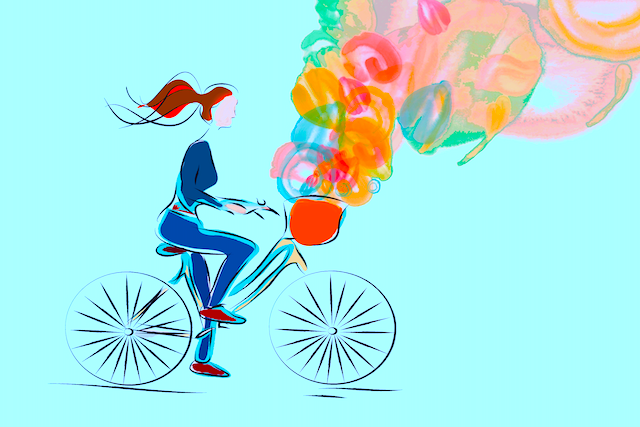 “Life is like riding a bicycle. To keep your balance you must keep moving.” ~Einstein

I recently heard from a friend whom I had not heard from in over two years. He sent me an email just to check in and see how I was doing, congratulate me on my recent marriage, which he had heard about, and let me know that he had faced some hardship over the past couple of years.

He had been, simply put, stuck. To my surprise, he also mentioned that some words I had sent him in an email, many moons ago, had stayed with him and encouraged him over the years.

What were those words? “Don’t even talk about dreams. Think of it as actually the moment, the doing.”

At the time, my friend was facing a very common fear: what to do with his life. He had dreams like we all do. He had goals he wanted to accomplish.

This is something we all face at some point in our adulthood and with my friend, that fear of what’s to come, what may be, was holding him back from simply doing anything. In that way, he found himself feeling so stagnant that depression was taking hold.

Funny, I had not remembered ever saying that. Nor did I recall our correspondence, but upon reading the words, I thought, Wow, I still say that to myself now! Keep doing… cause it’s all about the journey.

These are all things we’ve heard before. I had said nothing new.

So how do we find the balance and keep moving? How do we have big dreams, and still obtain them? How do we experience the day to day? How do we go do?

In my early twenties I was briefly married to a man who was one person before marriage and another person after. During our marriage he was extremely abusive, dangerous, and to be frank, downright selfish and mean.

During that time, despite everything else going on in my life—the day-to-day stresses, hopes, demands, and needs—I was still in fear for my very own life, whether it was at stake in reality or not.

At the time, I didn’t realize this fear.

I spent three dreadful years married to this person and trying to do anything and everything I could to avoid being exactly where I was.

I would come up with excuses to be out of the house or out of town. I was telling myself I would leave or that I could change my husband, and in the worst way, I was not allowing myself to emotionally recognize the true danger of the situation I was in.

Why? Because I was terrified. Terrified my marriage would fall apart, terrified to tell my friends or family, terrified I would be looked at as the ‘poor victimized wife,’ and even more so, terrified to confront my husband for fear of what he might do.

Had I known then how important living in the present was, I likely would not have stuck around in that marriage for so long.

When we are in crisis situations, even stressful situations at work or school or at home, our bodies tell us to fight or fly. Mine did both while I was being abused. But more importantly, and on a conscious level, I was denying myself the one thing I needed most—to see where I was and accept it.

Now, let’s take this example and move it into something perhaps a bit more relatable.

Consider the stresses of a demanding job. Consider monetary problems—too many bills and too little cash. Consider a fight with a loved one or confusion on where to go in life or what to choose for your career.

In any stressful situation, of the many and hundreds of situations that abound our lives, there is truly only one answer that I’m aware of that applies to all these open ended questions. That is: go and do.

When times are tough it is easy to get caught up in the toughness and remain there.

Whether that means you stick to your guns in an argument or ponder your dreams rather than take action, either way you’re stuck. You’re stagnant. But, if you remind yourself to go and do, then you move.

I won’t say forward because I don’t know if we are ever moving forward; perhaps we are just swarming around in an eternal grain of sand. Perhaps life is just a string of present moments, neither past nor future. In any case, the movement, the doing, is the living.

Had I allowed myself to be in the dangerous moments of my marriage, mentally accepted that my life was in a situation of abuse, and at stake lay my happiness, my well-being, my peace of mind, I would have not stayed stagnant in that marriage for so long. I would have made a change. I would have gone.

Had my friend not spent so many years questioning what he should be doing, he would have just done.

The key is to recognize every moment and keep moving.

It is an oxymoron to be in the moment and always moving from the moment, but such is life and it is a truth that cannot be denied if we are in search of peace.

The world is ever moving. Ever changing.

Living in the moment means doing or feeling or seeing or recognizing what’s right in front of you. The important thing is to let yourself experience everything—the good and the bad—and once you experience it, then you let it pass.

We get caught up in our pasts because we did not allow ourselves to live those pasts when they were present.

Take my example. After finally extraditing myself from an abusive environment, I lived with PTSD for the following six years, reliving over and over everything that had happened to me once before.

Take my friend; had he been doing and changing and living rather than pondering what’s to come, he would have done what he is finally doing now.

Now he is just, simply put, exploring life. He is not setting ultimatums saying, “I must be here and have xyz by this point.” Rather, he is in the moment and recently took some time for himself, volunteering at a Buddhist retreat in California.

Instead of worrying so much about where he would be, he is taking time to be now, living and relishing in his current situation.

You have to live in the moment so that it can pass. You have to face your fears, so they too can pass. And since it must pass, we must feel its presence, good or bad, while it actually is present, for it too will haunt us, for better or for worse.

Whether you are fighting abuse, fearing your future, worried about school or a test or a meeting at work, stressed about money, losing sleep over love, no matter what is on your mind at any given moment, the point is to be aware of what you’re feeling, what’s around you, and in all cases, to continue to go do.

We so often get caught up in the stress, the worry, and in some cases, so caught up in avoiding the danger or real fear in front of us, that we forget to just live. So try to balance and stay on your bike. Remember to live each moment, let it pass, but keep moving and enjoy the next. As Jonsi said, just “go do.”

Jenny Bowman is a freelance writer and editor specializing in self-help, regional writing and children’s literature. She is a lover of books and the Carolina shore, where she resides today with her beautiful husband and son. If you would like to learn more about Jenny, visit her at jennybowman.com and on Facebook.

Accept the Past, Embrace the Future, and Live in the Present