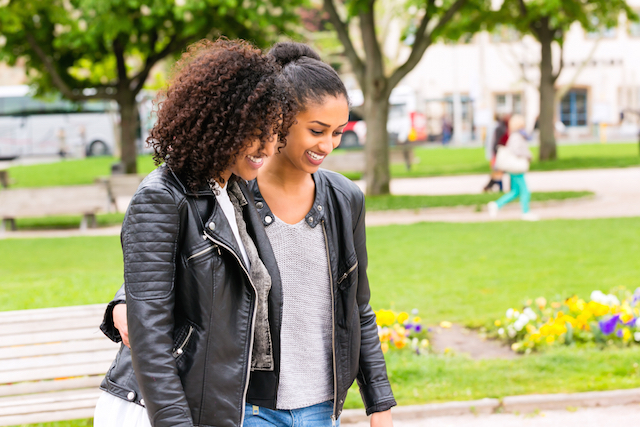 “The measure of intelligence is the ability to change.” ~Albert Einstein

I’m sitting on the couch by myself watching Dexter reruns on Netflix. But I can hardly focus on the show. I’m freaking out because I still haven’t made any friends, even though I moved here over a month ago.

I keep thinking to myself: “Will all my Saturdays look like this?” “Will I actually be able to make new friends and build that social circle I was so excited to have?”

Let me rewind just a bit.

It’s a hot and sunny summer day in Southern California.

After hours of Tetris-like packing, my Toyota Corolla is packed to the brim with everything I consider important. My guitar amp has clothes stuffed in the back of it. Even my snowboard is upside down, forming to the shape of the roof.

I should be exhausted from packing, but I’m not. I’m beaming. Smiling from ear to ear, I can’t wait to start a new chapter in my life.

With a new promotion in hand, I am given the task of opening a new office in Santa Fe, New Mexico. I have never even been to New Mexico before, but I am ecstatic to meet new people and create new life experiences. So I hop in my car and make the fifteen-hour drive to begin my new adventure.

I’ve arrived in New Mexico, and I am high on life in the high desert of Santa Fe.

Life is great. I’m loving the delicious, authentic New Mexican food and the warm monsoons with crazy lightning. I’m spending my time getting to know the wonderful city of Santa Fe.

More than a month goes by and, just as monsoon season is ending, I’m all settled in and enjoying my job. However, the excitement of making new friends and living the dream is starting to disappear. Actually, it’s starting to turn into fear.

I’ve never felt so lonely in my life.

Day after day, anxiety slowly grows deep inside my body. When will I start to make new friends? Will I ever even make any friends here?

The fear of loneliness is eating me alive. Especially because I didn’t think that this would be a problem at all. But it’s making it hard for me to focus on anything but my inability to make friends.

I know that if I want to meet new people and make friends that it is up to me. I need to take action and be proactive. The only problem is that I don’t really know how.

But I try anyway.

I muster up the motivation to go to a public pub crawl on a Saturday night and tell myself that I am going to turn things around and move toward my social goals. When I finally realize at the end of the night that I only spoke to one person the entire time, it only deepens the pain and stress.

As bad as it seemed and felt, some good things were taking root even though I didn’t know it at the time. I had been on a self-help kick for quite some time and was constantly reading and doing what I could to improve my life.

By some stroke of luck and beautiful timing, I got my hands on the book Yes Man by Danny Wallace. In it, recently single Danny was falling into isolation and loneliness until he decided to say yes to everything, and in the book he recounts the events that unfolded.

In short, he met tons of new people, did a bunch of crazy things, and had one hell of an adventure.

I read the entire book in one day—quite a feat for me. I may not have known it at the time, but this was a pivotal moment in my life. It fundamentally changed my beliefs and the way I look at life.

I was missing opportunities left and right.

But then, after reading Yes Man and deciding that I need to be way more open to new experiences and new people, I decided to be much less picky.

I hung out with a forty-year-old Texan I met through email and went to a strange and interesting event called Zozobra. I went to a college football game in Albuquerque (definitely not my wheelhouse) and to the Santa Fe Wine and Chile Festival. I also played darts with some people in the back of a cigar club.

On a Monday evening around 8:00 PM, rather than calling it a night and turning down an offer to go to a BBQ at a friend of a friend’s house, I went. But it wasn’t easy. I still had all those thoughts running through my head: “it’s late,” “you’re tired,” “you have work tomorrow,” “just go next time,” yada yada yada.

This time, though, I decided to say yes. Even with the knowledge that I had to find my way around the ridiculous streets of Santa Fe, which don’t seem to make any sense whatsoever.

When I arrive, the friend that invited me meets me out front and shows me in. He introduces me to the hostess who was throwing the BBQ. Fortunately, I’m welcomed with open arms.

I’m offered dinner, but go straight to dessert (5:00PM is much closer to my dinner time). I sit down at the table and start to talk with a group of six people. I get to know them and they get to know me.

They seemed cool, although I didn’t think they were anything special. I got a couple numbers at the end of the night and went home.

The seeds are sown.

Over the next month, I slowly started to hang out with these new people. One of them invited me to go bowling with his friends. Another invited me to get drinks with some people.

The momentum kept building and eventually I met a bunch of new people and was doing new things regularly. Before I knew it, I had a core group of five really good friends, and was talking to and hanging out with many others. Things were finally starting to turn around.

Even though I didn’t think they were anything special right when I first met them, they ended up being some of the most amazing people I’ve ever met. Truly great friends—the type that bring soup to your house during their lunch break when you’re sick.

Had I continued to judge people before getting to know them, I would never have made the friends I did. Coming from Southern California, I had a much different style and culture than the people I met. I could have easily just asked, “are these really people I want to become friends with?”

Or, after meeting everyone at the BBQ, I could have shrugged them off and not hung out with them the following times.

Well, deciding to say yes was the best decision of my life. It’s been almost four years since I left Santa Fe and moved back to So Cal, and I’m still good friends with those people. I’ll even see many of them at my wedding in September.

This whole process taught me so much. Particularly, that it’s the person on the inside that is much more important than what you see on the outside. The person that you get to know over time, not in the first few minutes you meet them.

And I’m not saying that just to be sweet and nice. People that I would have typically judged as “not my type” ended up being some of the coolest people I have ever met. Those are things you don’t realize the first time you meet someone.

Proactively say yes: Be proactive and find new things to do, while doing your best to meet new people when you are doing them. This can be joining a book club, an adult-league soccer team, or a weekly board game meet up. It can be volunteering or seeing a band at a local bar.

It can also mean finding people online and emailing them, or going to the disc-golf course and pairing up with others. The goal is to find new experiences where you can meet new people, and then say yes to yourself by going!

Reactively say yes: When people invite you to do different things with them, say yes. Although you might not be sure if you really like the person yet, or you don’t think the event or activity is something you’d have a lot of fun doing, do it anyway. And do it with the intent of getting to know the people you go with and meeting new people while you’re there.

Being open to new experiences and new people changed my life dramatically for the better. If you are having trouble making new friends, wherever you are, you might want to consider saying yes more often.

Rob Riker helps people create amazing relationships and build a social circle of truly great friends–the type that always have your back, even if you just moved to a new city. Want to see how? Get his free 8-lesson email course Making New Friends The Easy Way and learn how you can make new friends this month.

The Best Christmas Gift Ever: Finding Blessings in Challenges