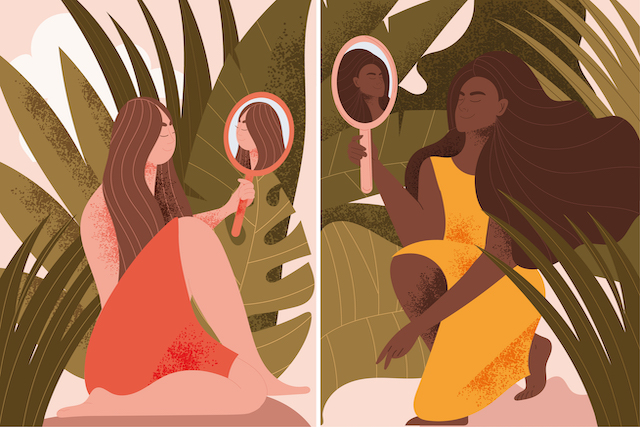 “Embrace and love your body. It is the most amazing thing you will ever own.” ~Unknown

The first time I made myself throw up to feel skinny, I was five years old. My grandmother still loves to tell this story—she thinks it’s funny.

The story goes like this: I tell my grandmother my stomach feels sick. She rubs my belly. I tell her it still hurts. She asks me if I want to try the “potion.” I say, “Yes.”

The “potion,” as I realized in an unrelated context in my early twenties, was syrup of Ipecac—a strong vomit inducer. I should mention this was back in the Ukraine. My grandmother uses no such potion now and neither does most of the populace—I hope.

So, there I go drinking a whole glass. I vomit. Ten minutes later, I’m in front of the mirror, hiking up my dress to look at my stomach, saying, “Don’t I look pretty? Don’t I look thin?”

My grandmother almost rolls onto the floor laughing. She’s laughing because this little kid pulled the wool over her eyes, because my stomach didn’t really hurt. Because I’d conned her.

How could this woman, who’s from the old country, who had to share a loaf of bread with nine of her siblings, possibly understand the reasoning or the danger of throwing up your food on purpose?

Fast forward ten years, I’ve got a full blown eating disorder. I just wonder what my grandmother would have said if she’d have walked in on me, sitting on my bedroom floor, at age fifteen, surfing a pro-mia website, shoving a salt-covered wooden spoon down my throat to see if it made me gag easier.

Never in a million years would she imagine what I’d been doing and why.

My mother, however, is a different story. And so am I.

I remember, when I was about four, my mom dropping me off on my grandmother’s step warning her not to feed me too much. That would have been the worst thing—if I gained weight. My mother took many precautions to make sure this did not happen.

Of course, my grandmother didn’t listen.

And so, the precautions turned to problems. My mother’s worst fear had become a reality.

I still remember the fury with which she scolded me when she found stashed food in my room, the anger in her eyes as she tried grabbed onto my fat and my senses, trying desperately to make me understand—she was trying to help me.

No one wants a fat girl.

I remember watching her go on and off diets. I remember watching from around the corner as she put on her makeup, her creams, her mask. I remember the way she’d talk about herself as if she were an old house that she was trying to renovate, although the wood had rotten and fallen through the cracks.

I found out later much later that, although my one grandmother wouldn’t know a thing about that kind of thinking, my late grandmother, my mom’s mom, was like my mother and me. She had learned the ways of self-loathing.

It was like something happened to the women on my mom’s side of the family that didn’t happen to my dad’s side, like a program had been downloaded into our heads that said: “No one likes a fat, ugly girl, and you are one.”

In her TED talk about lexicography, Erin McKean mentions something she calls “The Ham Butt Problem.”

The Ham Butt Problem goes something like this: a woman’s cooking a ham for her family and she cuts a huge piece of butt off and throws it out. Her son sees her doing it and asks, “Why do you do that?” She answers, “Well, I don’t know, I guess because my mother always did it this way.”

So, woman calls her mother and asks her, “Mom, why’d you cut the butt off the ham when you made it?” The mother says, “Well, I don’t know, my mother did it this way.” So, both women, full of curiosity now, call grandma and ask her the same question.

Grandma laughs and says, “My pan was too small.”

By the time I was twenty-three, I had dyed hair, dyed eyebrows, and a whole closet full of shape-altering clothes. I had problems with addiction, co-dependent relationships, anxiety, and self-hatred so serious that it ended me up hearing voices and feeling suicidal.

Cutting the butt off my ham almost killed me.

As I picked up the broken pieces of my life, trying to put them back together, I realized that everything was too broken to glue back together. I had to start over.

And as I looked at those broken pieces lying there, I realized suddenly that all of the pain and self-destruction I had brewed in my life for almost twenty years had the same source. It was that program—that self-loathing thinking that I’d inherited from at least two generations.

As I learned to see myself in a different light, I realized the pure ignorance of that kind of thinking. How ungrateful is it to say that nature doesn’t know how to make beauty? Doesn’t nature make sunsets and rainbows and beaches? Nature made me. How could I say that was ugly? Who was I to judge?

And so, I learned to fall deeply in love with my reflections, not because of my flaws and not despite them, but because this body is a gift, because beauty is the signature of all living thing, because I am a tiny piece of the universe; how can that not be beautiful?

The more I’ve liberated myself from this programming, the more I’ve looked around at the women in my generation and felt a deep yearning to heal their pain.

They, too, are carrying the burdens of this cultural programming on their shoulders, never realizing that they’re only suffering because they were taught to suffer. There is no good reason to hate our bodies, no matter how they look.

There is no reason to spend our lives in this kind of desperate, self-hating pain.

I think that self-acceptance is the modern-day revolution, because self-loathing is modern-day oppression. I honestly believe that each person who realizes his or her own beauty changes the world.

I already know I’ve changed the world. I know because, one day, I’ll have a daughter who will watch me looking at myself in the mirror. And when she spies on me from behind the corner, as I once spied on my mother, she will not learn to be upset at her backside and to nitpick at her blemishes. She’ll learn to smile, look in her eyes, and greet her best friend.

And that, more than anything else, is what really makes a difference.

Being Skinny Doesn’t Make You Fit or Healthy