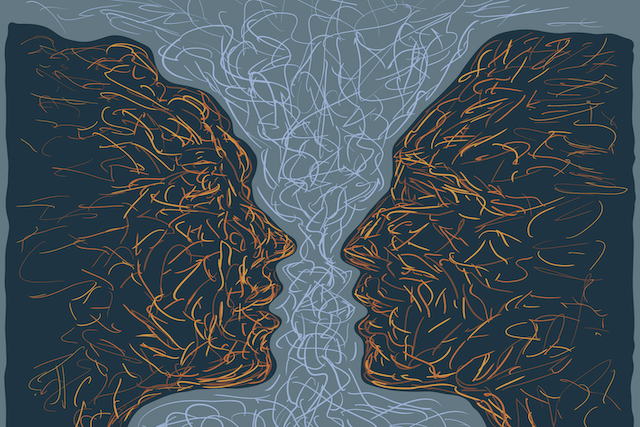 Breakups are devastating, and the pain is real. But if you’re a highly sensitive person (HSP), it can take an extreme toll on your system because HSPs feel everything twice as deeply.

For the HSP, the pain of a breakup can be completely overwhelming and trigger a heightened emotional state.

When a relationship ends, it can make you feel insignificant. Regardless of who initiated the ending, you experience a tremendous impact in your life that can drive you into despair, confusion, and rage. Not only do you feel emotionally affected, but you may feel as if you are physically wounded as well.

My whole world came crashing down when my partner went radio silent. He refused to answer my texts and avoided any form of contact. I felt lost and confused, not knowing what to do or where to turn. Each day felt harder than the day before.

I knew for months that things were not going well, but I was clinging on to hope that the situation would somehow improve. When my partner left without a word, I knew that was the end. I did not get any closure, not that I require it because I realized it would not make me feel even the least bit better even if I did.

I’ve heard stories from fellow HSPs who took a long time to get over a breakup, and I didn’t want that same experience for myself. But the pain of dragging my broken heart around and the intense emotional stress were not getting any easier on me.

A day felt like a month, and I wasn’t sure I could survive until the end of the month because the experience was so devastating. I wanted to get over to the other side quickly and get on with my life.

These are the steps that helped me recover within a shorter time than I feared it would it take.

1. Forcing Myself to Get Out

When the realization that we’d never be together again hit my brain multiple times a day, I lost functionality. My entire system broke down. I could not think clearly or act normally. All I wanted to do was vegetate and cry, which only made the situation worse.

To reset my brain, I tried to get out of the house as often as I could. My body and brain would fight me. I was already exhausted and feeling hopeless. It took a tremendous amount of willpower to drag myself out of bed. The moment I succeeded, I realized it wasn’t half as bad as I thought it would be. I just had to win the mind game.

I engaged in simple activities such as dropping in for a cup of coffee at the local café, taking a drive to nowhere, sitting alone watching children play in the park, or just enjoying the sunset. Beauty has a way of distracting us from our thoughts and soothing our nervous system. It drew my mind temporarily away from the problem and provided relief at the moment.

2. Affirming My Self Worth

Whenever my mind started reminding me it was over, I blamed myself. I imagined there was something I could have done differently. Or that it was my fault it had happened. I beat myself up and placed the entire burden on my shoulders.

Knowing there was nothing I could do to reverse the situation, I attempted to tell myself a different story, even though I did not believe it in the beginning. I assured myself I was worthy of love, that I deserved to have someone love me as I was, and I required no validation from others to feel good about myself. I made those affirmations out loud so I could hear myself speak.

In the beginning, it was a struggle. I would sneer, criticize, or ridicule myself every time I said an affirmation because I did not believe my own words. I persisted between tears and disbelief. Thankfully, it got better over time. Gradually I stopped criticizing myself and what remained were purely affirmations. As I continued to hear myself speak, I gained my own acceptance.

Research suggests that practicing self-compassion can help us become better adjusted and significantly improve our mental health. But it doesn’t come easily to HSPs.

We tend to have unlimited compassion for everyone else but struggle to offer the same compassion to ourselves. We often judge ourselves as weak when we’re struggling with emotional pain. But that’s when we need self-compassion the most.

As I gradually came to terms with reality, I indulged in more positive self-talk. I spoke to myself as I would my best friend. I told myself that I was the main character in my story, and I needed to heal. Despite what was going on, I assured myself I could feel better and rise above the situation.

I focused on myself, telling myself that I would get out of this episode just fine. I convinced myself that soon, the pain would go away, and the awful feelings would end. Again, in the beginning, there were no significant changes. I persisted and gradually experienced mental clarity that showed me I was on the right path.

As I began to heal, I noticed the gap between the time I crumbled and the time I could hold up became further apart. It was not uncommon for me to break down multiple times throughout the day. Sometimes, I managed to get by without crying for an entire day. To me, that was a breakthrough because it showed a marked improvement.

Some days I unexpectedly suffered a relapse after a period that I thought was an improvement. That took me completely by surprise. Gradually, I accepted that I was still in the process of healing, and that it was normal for my brain to revert to the lingering memory.

When that happened, I revisited what I practiced earlier—getting out, affirming my self-worth, and practicing self-compassion. Self-talk was a crucial part of my healing process.

I had to listen to my own words long enough to believe they were true. I had to avoid giving in to the mental chatter about my role in the breakup and my worth.

We generally act on what we believe about ourselves. If we believe we deserve to hurt, we don’t do the things we need to do to heal.

Moving On With My Life

In slightly less than two months, I woke up with no brain fog and was able to go through an entire day without breaking down. I was able to resume my normal activities and focus on the day ahead.

For me, the whole healing process was a battle of willpower. Some days were tranquil, although most days were difficult. Typically, it was one step forward and two steps backward. Whenever I struggled, I reminded myself that I wanted to heal and feel better. That generally got me on my feet and out of the house.

A breakup can have a huge impact on a highly sensitive person, since we are more susceptible to stress and extreme anxiety. Although healing takes time and often we have to allow nature to run its course, there is no need to prolong the pain longer than necessary.

Once you decide you are ready to receive healing and do everything you need to accommodate the process, you can come out of the episode faster and move on with your life.

Esther George is a freelance writer and a fellow HSP. She’s also a dreamer and a storyteller. She loves talking and writing about mental health, personal growth, spirituality and the philosophy of life. She is a firm believer that everyone should find their own version of happiness. Esther loves meaningful discussions about discovering and living your best life now. Apart from her blog, her writing appears regularly on Medium.

How to Heal a Broken Heart Using Mindful Self-Compassion