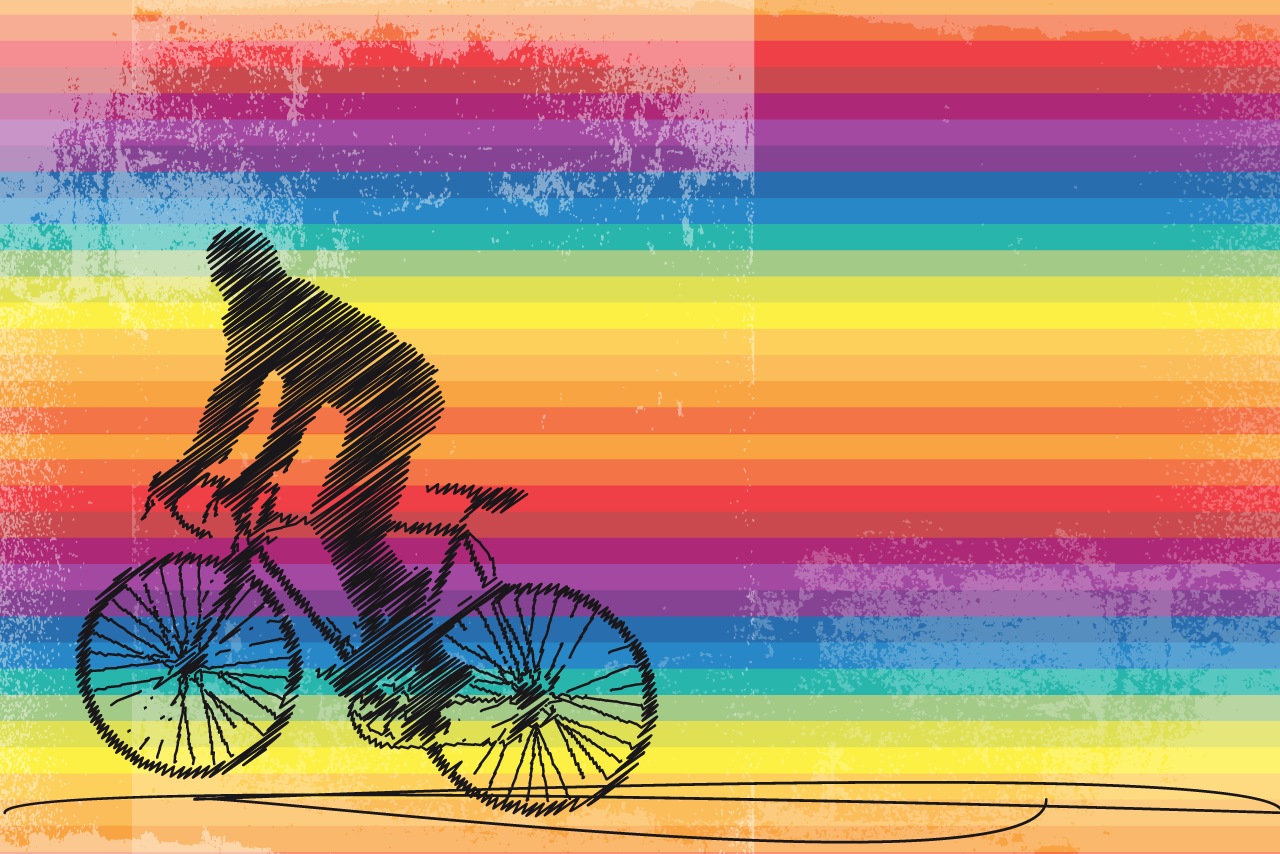 “Sometimes it takes a good fall to really know where you stand.” – Hayley Williams

How often do you appreciate the pleasure of taking a deep breath? Have you stopped worrying about what the world can do to you, and instead focused on what you can do in the world? Do you actively appreciate your life, as a part of your daily routine?

Odds are you do not. I know I certainly didn’t, until it was nearly taken from me.

I’ve been riding bicycles around New York City since I was a child. While cycling in the city used to be considered something of an extreme sport, in the last couple of years the city built bike paths on many streets and avenues, making it safer.

It was during this expansion that I was hit by a bus.

In 2009 I would ride my bicycle to and from work every day, using bike lanes whenever possible.

Nights were a different story. I avoided certain roads because the prevalence of bicyclists who would travel the wrong way without using any lights raised the spectre of a crash, and falling out of the bike lane and into traffic.

When I feared Central Park West would be a dangerous way north, I would use Amsterdam Avenue instead.

I figured that, on balance, it was less dangerous than hitting an invisible cyclist coming straight at me out of the darkness.

It was sunny at 4:30 pm on November 22, 2011. Sunset was an hour away, but I was worried that it would get dark during my commute, so I took Amsterdam home.

The temperature was comfortable, and the traffic was not too heavy. I was riding my Bike Friday custom folding bicycle, past where I used to play billiards as a boy, past some high-end bars, and past a parked police cruiser. That’s where I was hit.

A Peter Pan bus was headed to New England on Amsterdam Avenue. Like most private bus drivers, the driver was hurried.

He was hustling to beat the evening rush. Getting stuck in traffic before the interstate would mean arriving late to his destination. Once on 10th/Amsterdam Avenue, he put the pedal down, weaving through traffic to get north as quickly as possible.

When the bus undertook a car, weaving into the rightmost lane, the side of the bus struck my shoulder, then the left handlebar of my bicycle.

I wobbled to the right, and the bike, its wheel turning ninety degrees as a result of the handlebars being struck, spun out from under me, sending me flying.

As I catapulted through the air, my instincts took over. Years spent studying Japanese martial arts taught me how to take a break-fall, and to tuck my chin so my neck would not snap on impact.

I did what I could.

When I landed on my left side, I injured my spine in ways that would only reveal themselves shortly after the lawsuit was over. I tore the labrum in my left shoulder. I was, however, not dead.

When I tucked my chin and turned my body away from the bus, I ensured that while the wheels of the bus ran over my backpack, they missed my head and spine, coming nowhere near my extremities.

I can still recall the feeling and sound of the air whipping past my neck as the rear wheels of the bus passed within inches of my head, pulling my backpack under so hard that the shoulder straps tore completely.

The police car immediately chased the bus as soon as I was hit, catching up to it several blocks later. When the cops returned, they were shocked that I was not dead, since they had seen this sort of thing before, and it “always” ended in death.

After I staggered out of the roadway, I texted my wife, who collected me and took me to the hospital. I was in total shock, and my thoughts were a mess.

At the hospital, I told the nurse at reception what happened. “How do you feel?” she asked.

It took a while to process what happened. There’s a reason they call the state you’re in after an accident “shock” after all. The night after the accident, I felt okay, and went to bed. The next morning, I was in so much pain, I couldn’t move.

There was a lawsuit. There was physical therapy. It wasn’t fun. At the same time, I went through the accident, lawsuit, and recovery, I was questioning my choice of career, and there were massive layoffs at my company, of which I was eventually a statistic.

Newly unemployed and physically damaged, I was forced to take stock of things. Was I happy? Should I keep chasing a career that made me miserable? How would I feel if I had to look down the barrel of a gun one more time?

Looking Death In The Eye Is Transformative

Coming face to face with death helped clarify things. Death puts life in high relief. You take stock of the elements of your life and see them objectively because you aren’t thinking about the experience of them so much as the existential question of “Is there a point to this?”

Trust me, the question becomes easier to answer after a near-death experience.

For a start, I knew I truly loved my wife and she loved me. Our relationship became stronger from enduring my injuries. I appreciate her even more with each passing day. She is one of the puzzle pieces that fits perfectly.

After all, what are the odds of meeting one specific person, then dating them, then marrying them, in a city as big as New York, especially considering that she isn’t from the USA?

I savor every day with her, because I know how unlikely our meeting was, and how it was nearly all undone under the wheels of the Peter Pan bus.

How about my career, the one I thought defined me as a person? I realized how much I really hated my job—the one I’d recently lost.

I started to explore other applications of my skills. I found not one, but several. I use this as a platform to elevate and better myself each day. I was immediately happier, and all of my long-term professional dreams came closer.

Most of all, I learned to live deliberately.

I make it a point to keep in touch with my parents regularly. When I am not working, I make sure to disengage so that I can devote my full attention toward my children.

I spend more time appreciating the beauty of Mother Nature, even if it means just a quick stroll in the park with my family.

And even though life keeps me busy and it’s harder to maintain friendships as an adult, I’ll try to check in with a few of my close friends to let them know that I appreciate them in my life.

I also spend less time worrying about who I’m supposed to be and more time focusing on who I want to be.

Growing up in a typical Asian family, my parents taught me that success in life means getting into high-paying professional careers. Jobs like accountants, doctors, lawyers, and engineers are the preferred ones. So, you can imagine how devastated they were when they discovered I became a graphic designer instead. At that point in life, I felt as if I’d let them down.

And most of the time, we take these scripts and use them as guides to our path, afraid of diverging from the set plots.

We believe that we are expected to look a certain way, live a certain way, in order to be deemed as worthy by the society. But what happens when life throws us a curveball—like being hit by a bus and being let go from your job?

Those are not part of the script. Without any guidance, we let ourselves believe that the script ends there.

Allowing all the scenes in your script to come from the world is letting your life be up to a roll of the dice. The truth is, we are the authors of our script. It is up to us to write the script we want to follow, because no one else is going to.

In the face of disaster, we can either let that moment become the defining source of lifelong disability or grievance, or we can use it as motivation to realign our priorities with the things that make us happy.

So where did my script lead? All the changes I’ve mentioned were adjustments made in a moment redirecting the vectors of my life, but they were only moments; turning points now years in the past. Most of the time I live with a single effect of the accident: I feel alive.

Living isn’t just a state of being anymore, it is an active experience. Even when my body reminds me of the many ways it is dinged up, I’m reminded that I am alive, and I savor those feelings, because as bad as I feel some mornings, feeling anything at all is a pleasure, because it means I survived something horrifying, and get to laugh in the face of death.

My life’s script now also involves less worrying. We usually worry about the things we cannot control, and how they will potentially affect us. Most of the time, the things we worry about don’t materialize, and if they do, they aren’t as bad as we think.

Years ago, I worried so much about the possibility of being laid off by my company that it kept me awake with cold sweats on many nights. Unfortunately, my worry turned into a premonition. But I also realize that worrying didn’t prevent anything from happening, and in the end, getting laid off was for the best.

So, why spend any life’s precious moments worrying?

Life’s too short for that.

Jay runs Great Big Minds. In his blog, he shares life-changing inspirational content with the world. He lives to empower, inspire and motivate others to live life great and go after their passion. You can connect with him more at greatbigminds.com or facebook.com/greatbigminds.