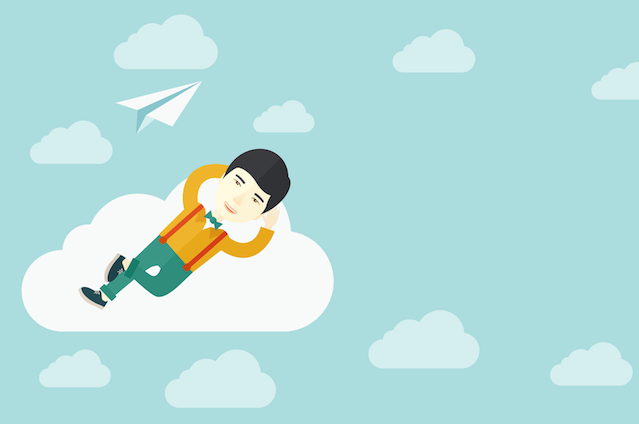 “No valid plans for the future can be made by those who have no capacity for living now.” ~Alan Watts

When I started kicking chairs at work, I knew things had gone too far.

I didn’t kick things when other people were around, and I thought it was the perfect way to release my anger. I could lash out with as much fury as I wanted, but I didn’t hurt anyone.

Why did I start kicking chairs? I’ll explain in a minute. But the truth was, I was hiding a bigger problem: I’ve spent much of my life hating myself.

When I was eight or nine years old, my mom asked if I was okay. She had heard me sobbing in the shower.

I told her I was furious at myself because I hadn’t been writing in my journal. I had skipped a few days, and a few days had turned into a few weeks, and now I was too far behind to catch up.

I was miserable. At nine years old, my life held no purpose because I hadn’t written in my journal for a month.

My mom comforted me, but I repeated the mistake countless times.

In my teens, I crafted a set of rules to lead me to perfection.

My plan was a sixteen-page document with eighty-four rules for the New Year. It included everything from a plan to improve my handwriting to why I would never use sarcasm or ask for seconds at dinner.

Focusing on specific rules would have made a few goals more manageable, but by January 3rd, I realized I couldn’t keep up with all eighty-four. So I blamed myself. I felt like a worthless human being who couldn’t do anything.

It only grew worse after someone broke my heart.

I spent years wondering where I had gone wrong. The person I wanted in my life refused to be with me, and I couldn’t figure out how I had messed up.

The answer, it always seemed, was that I wasn’t perfect enough. To appease the gnawing pain, I’d create a new list of goals.

I decided to build a body that would win me love. I spent ten hours a week lifting weights. I ate 4,000 calories a day for months to build muscle and then starved myself on 500 calories a day when I decided I didn’t look lean enough.

I spent $500 on new clothes in one shopping trip, only to find I was the same person inside, just in different fabric.

I earned a perfect 4.0 GPA in college and a well-paying job afterward. I immediately started working towards a new career, hoping the allure of accomplishment would make myself more appealing.

None of the changes made a difference.

When my extreme measures backfired, I bullied myself even more.

So naturally, I created a goal of becoming happier. I measured my happiness each day and tracked my progress.

But when looming anger crippled that happiness, I became ruthless with myself again. I wasn’t happy because I could never be happy. I was a loser at even the most basic of human emotions.

And so I started kicking chairs.

My life had become a cycle. A cycle of feeling like a failure, setting unreachable goals, missing those goals, and feeling like an even greater failure.

But the solution had been with me the whole time.

The solution was to let go.

That wasn’t one of the solutions. Letting go was the only solution. It just took me years to realize it.

The few times I chose to let go, I accepted my faults and felt whole again.

Now I live like that all the time. I allow myself not to meet my goals or even to break them.

To clarify, I still work to achieve things. But instead of dozens of lofty goals, I have two or three I’m confident I can meet. They are simple, and if they don’t happen, I will be okay. They don’t define my life.

By letting go of my goals, I am growing more. I am becoming a better person and goals are guiding me—not controlling me.

If I start to feel overwhelmed, I know I need to let go a bit more.

I’ve found these three strategies the most helpful when letting go of your goals.

You must first write every goal. Every single one.

All the silly, absurd, unrealistic, and idealistic goals you’ve ever imagined. Then consciously let go of them all.

Imagine what your life would be like without those goals. If you never accomplished any of them. Come to peace with that idea.

Only then should you add back in the few most important.

Too many people delete goals, only to think of them for months to come. They decide they don’t have time to read more. But they spend hours wondering about the books they are interested in, how it would feel to read them, and what they would tell friends about them.

Pondering half-hearted goals will cause as much strife as overcommitting yourself.

2. Let go of your impatience.

I tend to overcommit. If I want to become better at something, I’ll decide I need to spend an hour or two on it each day.

The problem is I can’t maintain that schedule and I give up, disappointed and discouraged.

I’ve found I work best when I ask myself the likelihood of taking that action step every day for the next month. If I’m less than 90% sure I can do it, it won’t happen.

Instead, I take a small action step each day, something I’m 90 percent sure I can do.

Yes, I want to practice guitar an hour every day, but I also know that’s too much time. If I try to practice for 5 minutes, though, I’m 99% sure I’ll be able to do it. If I practice more that day, I’ll feel good, instead of beating myself up when I play for 50 minutes instead of 60.

3. Let go during your morning routine.

At the beginning of each day, I review what I accomplished the day before.

My criterion used to be how much I did. Did I succeed with each goal? I usually found myself lacking.

Now my criterion is different. Was the day fulfilling? Did I do things that added to my life, even if none of them involved a goal? If so, then the day was a success.

Whereas most days began with me berating myself for failing at my goals, now I spend my mornings being grateful for the enchanting things I did yesterday.

When you change the way you measure your life, your life changes.

In my morning routine, I also spend some time planning what I want to do that day and making sure I am doing the right things. Any task that isn’t important, I let go. It just isn’t necessary.

The day is better that way, and I’m more productive, too.

Since coming to terms with my goals and letting many of them go, I am a much happier and fulfilled person.

Instead of hating who I am, I’ve come to accept myself and my accomplishments. I’ve let go of the goals that held me back and now let the important things push me forward.

I don’t need a measurement to know I’m happier this way.

Stephen Roe writes at Thoughtful Growth, where he helps thoughtful people take control of their goals and live a better life. Stephen teaches how to use your individual strengths to grow into a better self. Use your morning routine to become happier with his free guide “Habit-Forming Morning Routines.”