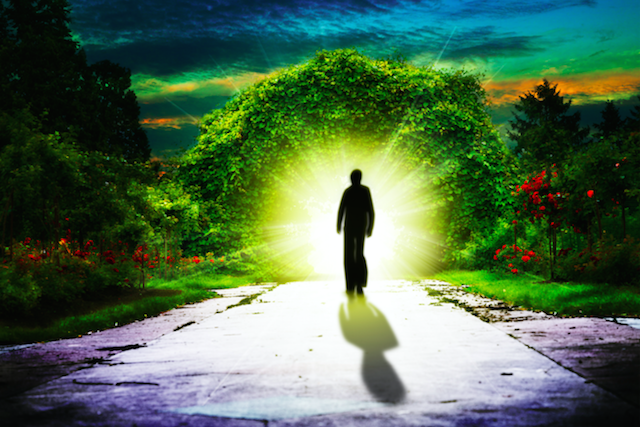 “In every loss there is a gain, as in every gain there is a loss, and with each ending comes a new beginning.” ~Buddhist Proverb

Four years ago, on a typically cold and overcast day in upstate NY, I found myself scurrying around preparing for a two-week trip to Kenya and Tanzania, which left the next day.

My father, a strong and soft-spoken sixty-two year old, had aspired to experience the great plains and animals of east Africa since childhood, and was deeply proud that he was able to pay for me to accompany him on his bucket-list adventure.

Though I had been looking forward to the trip for months, I felt stressed, as I hadn’t yet packed and was struggling to ensure that everything was in place at work and at my new home before venturing off to seek adventure.

After tying up loose ends with my boss and direct reports, I hurried home to double-check that my new sump pump was working before finally turning my attention to packing. At this point I was rushing, as I was trying to beat traffic en route to my uncle’s house, where I was staying in preparation for an early flight.

I packed as fast and as thoroughly as I could and, as I finished, received a phone call from my girlfriend (now wife).

“Babe… have you talked to your mom? I think something’s wrong.”

Kerrin informed me that she had received two vague texts indicating something happened, though she wasn’t able to get a hold of my mother to get details. I thought nothing of it, but decided to check-in with my parents just to be sure.

I tried calling my father, who always picked-up his phone, and got his voicemail twice before trying my mother, whose line was busy. On my third try, I got through and asked her what was going on.

“Honey, there’s no easy way to say this. Your father just died.”

She explained that he had passed out in the shower, that she had found him in a pool of blood, and that neither she, nor a team of paramedics, were able to resuscitate him. We later found out it was a heart attack.

That night, after shedding many tears and conversing with a few family members, something profound happened: I experienced a deep feeling of gratitude for having had such a great father, a feeling that trumped my grief in a way I never could have imagined.

In the days to come, I found myself dealing with powerful emotions in highly constructive ways (a personal first). I also focused on celebrating my father’s fabulous life rather than cursing his untimely death, as my family hosted two wakes, a funeral, and two separate receptions that were surprisingly celebratory in nature.

Though everyone was grieving the sudden loss of a healthy and happy family man, the ceremonies were peppered with a sense of gratitude and hopefulness that were inspiring.

As strange as it sounds, no singular experience in my life has shaped or informed my ever-optimistic outlook more than my father dying. The experience completely reoriented my worldview and helped me appreciate the importance of gratitude, mindfulness, and my own emotional capacity at deeper levels.

Interestingly enough, it also set me on a path toward balancing some of my worst tendencies—particularly impatience, self-doubt, and the need to always be “right”—and endowed me with more gratitude, more present-moment awareness, and a more Zen-like appreciation for life’s ups and downs.

Here are a few takeaways from my loss and resulting growth, which have helped me become a happier, all around better human being. Perhaps something from my experience will help you become happier too.

I still remember how busy I felt that day, and how insignificant each detail of my work, home, and packed suitcase came to be minutes later when I learned my father had passed.

Like many, I’ve long struggled with managing my own inner-dialogue and negative self-talk, and would all too often let those negative scripts run unchecked.

Going through the loss of my father forced me to live in the moment for the weeks and months to come, as it required me to be strong, supportive, and empathetic for the hundreds of people who were shocked and mourning the loss of Big Ed.

Although I still don’t meditate as much as I could (something I’m working on), I’ve found that being more mindful has helped me stay sharper in meetings, more time consciousness, and even more focused and effective in my work.

More importantly, though, it’s helped me feel happier. So many of us rush through our days, stressing out about getting everything done. But it’s impossible to be happy when we’re not fully present because you have to live in the moment to enjoy it.

To cultivate a greater sense of mindfulness, all I did was start paying attention to my thoughts, feelings, and bodily sensations. I eventually added meditative practices to reinforce my present-state focus.

I’ve also taken the time to integrate a minimum of one mindfulness practice into my daily routine. Sometimes, it’s as simple as repeating a single word or phrase while working out, or actively listening to a podcast on my drive home; redirecting my focus to the author’s voice every time my mind wanders.

This simple trick has helped me become more aware and accepting of my thoughts, feelings, and emotional triggers, and less reactionary. It’s also helped me become less hurried and more conscious of the activities I say “yes” to, while cultivating a deeper appreciation for life’s little moments.

Never Stop Growing: Your Abilities Are Not Fixed

Right before my father died, I had hit a wall both professionally and personally. At the time, I was managing a team of eight people on two separate job sites—a great gig given my field and age.

My staff and I had worked really hard the previous two years to build out our programs, services, and resources, though I started to feel our efforts weren’t being replicated elsewhere in the organization. I felt slightly resentful, and had a hard time selling my staff on working hard and continually improving, as our efforts seemed to go unnoticed and underappreciated.

On a personal level, I felt that I was running myself ragged. In addition to our busy work schedules, my wife and I were fostering dogs, volunteering in different capacities, and regularly commuting between upstate NY and Long Island to attend family functions.

Despite how busy I was, I stopped growing personally and professionally, and found myself becoming more quick-tempered and close-minded. I was angry, frustrated, and depressed at work, and unknowingly developed a fixed mindset—thinking that my intelligence, abilities, and even station in life were stagnant rather than fluid.

When my father died, every good deed I’d ever done, and then some, were repaid in the form of countless hugs, flower arrangements, meals, warm messages, and unexpected visits from people I hadn’t talked to in years. The support was incredible. It helped me detach me from my own self-pity, get out of my own head, and resolve to live a fuller and happier life.

I began challenging and bettering myself in every aspect of my life. I started eating healthier, drinking less, and working out with a new vigor. I also resolved to be a more emotionally available friend and romantic partner, and completely changed my attitude on the job, knowing that my staff and I could improve.

Six months later, Kerrin and I eloped in Hawaii and I received an offer from one of the best college’s in the country—direct bi-products of my new attitude and outlook.

I’ve learned that no matter what is happening in life, we always have room to grow. And I’ve learned to ask those around me how I can get better—as an employee, a husband, father, and friend. This practice has helped make me become more self-aware and humble, while strengthening relationships with those closest to me.

Gratitude: Practice May Not Make Perfect, But It Does a Lot of Good

While I certainly wouldn’t characterize myself as “ungrateful” prior to my father’s death, the experience of losing him reinforced the importance of appreciating what you have while you have it.

The night he died, I was hit with a wave of emotions and the deep sense of loss you’d expect from a surprise death. The feeling of immense gratitude came shortly thereafter, though, and helped carry me through the challenges of the weeks and months ahead, while putting me on a trajectory toward cultivating a deeper appreciation for everything positive in my life.

Since then, I’ve made gratitude a daily practice. Every day, I find and name a few specific things or memories I’m thankful for.

I’ve found that practicing gratitude during challenging times has helped me build my resiliency because no matter what happens, I can find things to take solace in. I now see happiness as something I control rather than a byproduct of life circumstances.

Regardless of what’s going on in life, we can always name a few things we’re grateful for. If starting a gratitude journal is too blasé for you, do what my wife and I did and start your own “Jar of Awesome.”

Every few days, write down one or two specific memories that you’re grateful for and place them in the jar. In just a few weeks, the jar will be filled. When you’re feeling down, pull out a few memories, read through them, and see how you feel. I’d be surprised if it didn’t help you reframe whatever setback you’re experiencing.

Comfort with Your Own Emotions

I used to be really uncomfortable with my emotions, and had a really hard time showing vulnerability. Going through the experience of having my best friends, former neighbors, and family members watch me cry in a semi-public setting humbled me, and set me on a path to being more aware of and comfortable with my own emotional range.

What I realize now is that there’s strength in showing vulnerability. I’ve also learned that mindfully acknowledging and embracing my emotions has made me a much happier person.

Four years removed from that experience, I default to hugs over handshakes, warm smiles to cautious head nods, and vulnerability to apprehension. In doing so, I’ve forged deeper bonds with friends and family members and have created more meaningful relationships with many of my colleagues.

I still think about my father every day. As much as I miss him, though, I’m deeply grateful for the time I had with him, and appreciative of the personal growth I’ve experienced as a byproduct of his death. I like the current day version of myself better than any previous iteration, and have him to thank for it.

Mike O'Connor is the Director of Career Discovery and the Education Career Community at Williams College, where he helps many of the country's best liberal arts students find meaningful work. He recently started his own website, Wake Up, Be Awesome, Go to Sleep, as a means to help more people find purposeful vocations.