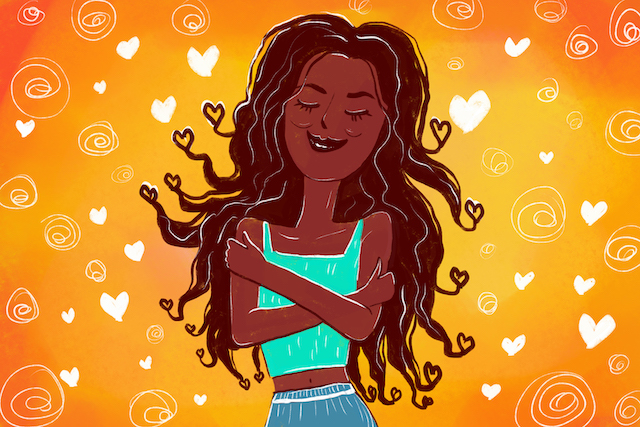 “I don’t always make the best choices, but today I choose compassion over intolerance, sympathy over hatred, and love over fear.” ~LJ Vanier

It’s crazy to me now, to look back and realize how freaking hard I was on myself for decades.

Had I ever talked to anyone else the way I talked to myself, it would surely have left me friendless and jobless, and I definitely would have been kicked out of school.

Basically, I was a bully. Just to myself.

If I said something awkward, I called myself an idiot.

When I couldn’t find the motivation to clean my house, I called myself a lazy slob.

If I wasn’t invited to a party, I told myself it’s because no one liked me.

When work projects were hard, and I had to make it up as I went, I told myself that I was going to get fired as soon as my boss figured out that I had no idea what I was doing.

My parents set high expectations of me. A’s were rewarded and B’s were questioned: “Why didn’t you get an A?”

They are successful, intelligent people (who somehow also are able to keep a clean house, like all the time), so if I did anything that didn’t meet what I assumed were their expectations, I told myself, “I’m not good enough, I’ll never be good enough.”

At a certain point, I realized this “strategy” wasn’t working out for me.

It wasn’t making me any smarter or more successful.

It wasn’t getting my house any cleaner.

What it was doing was making me feel like crap. Every day. And it got old.

Looking back, I realize now my catalyst for change was when I finally pushed past my social anxiety and found the courage to take classes at the gym.

I found that I performed better when in a group because of the positive energy of people cheering me on.

After a while I noticed I didn’t cheer people on quite as much as they cheered me on, and since it felt good for me to hear it, I busted through my fears and started cheering on everyone else in the class.

It felt even better when it dawned on me that I could talk to myself that way too.

And that is what self-compassion really is.

What is Self-Compassion, Anyway?

Self-compassion is speaking to yourself as kindly and empathetically as you would a friend.

Self-compassionate people recognize that being imperfect, failing, and experiencing challenges are all inevitable parts of life, so they’re gentle with themselves when confronted with painful experiences rather than getting angry when life falls short of their expectations.

Therefore, they speak in kind words—intentionally—to themselves.

It is recognizing the shared humanity in our suffering and difficult experiences.

When we’re being compassionate toward someone who is going through a hard time or has made a mistake, we say things like:

Because there is comfort in recognizing that pain and making mistakes is part of life, it’s part of the process, it’s how we grow, and we all do it—literally every human.

When we don’t take the time to say that to ourselves when we misstep, we feel isolated, and isolation breeds shame and separation and makes us feel worthless.

Why We Are So Darn Hard on Ourselves

There is nothing wrong with pushing ourselves and driving success.

Myth #1: I need high self-esteem to feel good about myself.

One of the biggest misconceptions about self-compassion is that it is the same as self-esteem.

We grow up believing that high self-esteem is the key to feeling good about ourselves.

The problem is, in our culture, to have high self-esteem, we have to be above average or special in some way.

It’s almost an insult to be considered “average.” If someone were to say, “There’s nothing special about her” that would make a person feel especially bad.

That’s why there are so many bullies in our society—because putting others down is one way to make your self-esteem go up.

(There are literally studies showing an increase in bullies and narcissism in our society in the past several years, and many psychologists point to the “self-esteem” movement as a big factor.)

Myth #2: I need to be hard on myself, or I’ll let myself get away with anything.

A lot of people have the misconception that self-compassion is self-indulgence.

But self-compassion enhances motivation, it doesn’t hinder it.

Let’s say your friend is upset that she texted someone, and they haven’t texted her back.

Do you say to her, “That’s probably because you did something wrong. I bet she doesn’t like you anymore, or maybe she never really did. You should apologize even though you don’t know what you did wrong, since she is most likely mad at you for something.”

Not only is it a mean thing to say, you know objectively that this is almost certainly not true.

You would likely say, “I know that feeling too. I get disappointed when I don’t get a response from someone. But she likely forgot or is busy, just like a lot of people. Her not replying isn’t a reflection of you, it’s an inaction by her. Don’t worry, she still might message you back, or you can message her again later!”

Which way do you talk to yourself when you slip up?

How to Practice Self-Compassion

1. Mindfully recognize when you hear your inner critic talking.

We get so used to using negative self-talk that we don’t even notice it. We just run with the critical stories we’re telling ourselves.

But you can’t change anything unless you recognize when you’re doing it by mindfully bringing attention to your thoughts, without judgment.

First, notice how you feel. Because self-criticism feels crappy. That’s your sign that you need to do a little mindful digging.

Now, the best tool you can use when you get that sign is to ask, “What is the story I’m telling myself?”

What is the story you’re telling yourself, and what language are you using to tell it?

2. Understand the positive intent behind your negative self-talk.

This is going to help you reframe your negative self-talk into self-compassion.

Let’s say you’ve been wanting to lose weight, but you look down and realize you just ate an entire box of cookies.

And now your harsh inner critic is saying, “You’re disgusting, you’ll never be able to lose weight, you have no self-control, this is why you’re so fat.”

Again, words we would never say to someone else.

What is the positive intent, what is that self-critic voice trying to achieve?

Right? It’s not trying to beat you up for the sake of beating you up. That voice has a purpose, it’s just using the wrong words.

3. Reframe that positive intent with self-compassion.

Restate what your self-critic is saying with the voice of self-compassion by talking to yourself as you would a friend or loved one, recognizing the shared humanity in the experience, and consoling in the fact that this too shall pass.

Can you look inward and say, “I see what you’re doing here. Thanks, subconscious, for the reminder, I know you’re just looking out for me. Now that we’ve heard what you have to say through the self-critic voice, let’s hear what the self-compassion voice has to say…”

“I get it, I’ve had a stressful day, I skipped lunch, and I’m tired, so I just fell back on an old habit—I made a mistake. Now that I know why I ate all those cookies, I can make a better decision tomorrow. All is not lost.”

Which one of these feels better? Which one would motivate you to do better tomorrow?

4. If you think you can’t be self-compassionate…

If and when during this growth process, you find yourself thinking, “I just can’t stop talking to myself in that negative way, it doesn’t feel natural to speak positively to myself,” I want you to understand two things…

First, self-compassion is a habit.

That negative self-talk you’ve been doing for years has simply become a habit.

It’s become your habitual reaction to stress, adversity, and failure. And that’s what we’re doing here: breaking old habits and creating new ones.

It will be a challenge at first, as are all new habits. But with some practice, this is going to get easier and easier. It’s making self-compassion your new default mode.

It will feel weird and unnatural at first. Don’t let that make you think it isn’t working. The more you practice this, the more you are training your brain to focus on compassionate self-talk instead of criticism, meaning you’ll spend less and less time with that critical language and more time with the compassionate language. In time, this will become your new, natural response.

Eventually, you’ll reach a point where you say, “Hm, if I did that a year ago, I would have beat myself up for days. Good for me!”

Second, you have a natural negativity bias that is working hard right now.

When you feel like you can’t be self-compassionate, understand our natural negativity bias.

We all have a negativity bias. It’s there with the intention to keep us safe. Your ancestors who were on the lookout for mountain lions lived longer than those who sniffed flowers all day.

But we are centuries beyond the point in our evolution where we need to be on guard in order to keep safe at all times. When you’re living with chronic stress and anxiety, your negativity bias is sticking in the on position.

Meaning, all you can see are threats. What could go wrong. What is wrong. What might be wrong. If you get a ninety on a test, you look at that ten that you missed and not the ninety that you achieved.

Know that you have blinders on to positivity, that your negativity bias is making you focus solely on challenges instead of achievements.

It’s what I call wearing poop-colored glasses instead of rose-colored glasses. Mindfully notice when you’re wearing them. Then take the glasses off! (They smell and they aren’t helping anything, anyway!)

Where Our Inner Critic Comes from and How to Tame It