How To Overcome Insecurity and Change Your Negative Relationship Patterns
By Carrie L. Burns 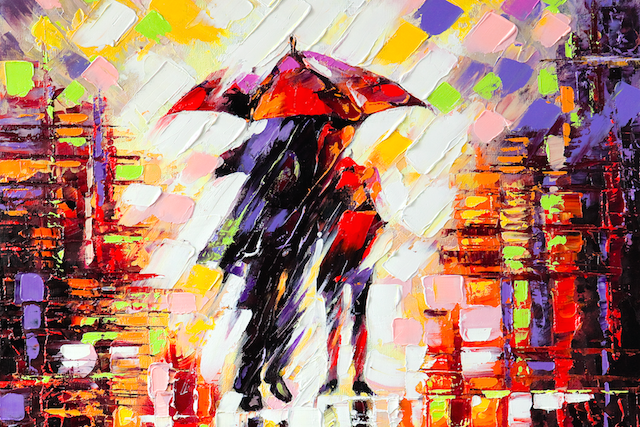 “Sometimes our thoughts are backed by so much insecurity that they create lies we believe.” ~Unknown

After nearly a year of being single and after going through my fifth breakup, I found myself involved with someone new.

It was the typical guy-meets-girl story you read about all over the Internet. We met for dinner and drinks and there was an immediate attraction. We laughed and talked and overall had a great night. By the second date, he stayed the night at my house and didn’t leave for four days.

This time I felt I was more prepared. I had studied relationships. I had learned about communicating. I was sure I was going to get my needs met and everything would be perfect.

I thought I was changed and that meant everything would be different this time. Surprise! Life doesn’t work that way.

I’m not sure I noticed it at the time, but I was still feeling a little insecure and unsure and wasn’t ready to let go of my fears. I made sure to continually tell him what I wanted and needed in a relationship. Little by little, I was pushing my agenda on him.

Naturally, he started to back away. I don’t think he even knew why and I certainly didn’t know either. I only knew I was feeling out of control and was perpetually pissed at him for being a jerk.

Slowly, we stopped spending all weekend together. He wasn’t coming over after work as often. His texts were more sporadic. Then, one Friday went by with not a word. Then a Saturday and then Sunday went by. It had been three whole days with no text, no call, no plans, no nothing.

Who did this guy think I was? Didn’t I deserve some sort of contact? What was I to do? Certainly this behavior was not acceptable!

So I cried and blamed him and told myself I had chosen wrong again, and that I wouldn’t be put in a position of feeling “less than.” Then I texted him out of the blue with the words, “Don’t ever call me again.”

I thought this was the totally mature way to handle things and that I was only “protecting myself.” I was, right? Wrong.

I wanted him to be wrong, but I realized he wasn’t and that he was just reacting to me.

So after about two weeks I called him and apologized for the way I ended things. I told him I’d reacted out of fear and that I was confused and scared and didn’t know what else to do. I knew that in addition to apologizing I had to change my patterns of interacting with him.

This time, instead of making everything about me and my wants and needs and fears, I began to take an interest in him and his life. I completely put myself aside (for the moment) because I knew that if I wanted a different result, I had to try a different path.

First off, I went slowly. I let him contact me at his own pace. He had to feel comfortable with talking to me again and realize I wasn’t going to freak out or push some needy agenda on him.

I had to learn to calm myself, which is something I thought I had already done, but apparently I had more work to do.

Oftentimes we reach out to others in the expectation that if they respond correctly, we’ll be reassured of our worthiness. Don’t let someone else dictate how you feel about yourself. If someone calls or doesn’t call or texts or doesn’t text, you need to be okay with it and realize the world won’t end.

Have some patience (which is hard for many of us), and try and sit back and enjoy every moment of the conversations or time together you do have. Stop living in the past or the future. Be present and go slowly. Life is not a race to the end, but a journey with laughter and love and joy and pain all along the way, and you can’t escape any of it, so stop trying.

Secondly, I listened. I listened to what was going on in his life and asked questions. I took an interest in the struggles he was having and was sincerely concerned and understanding.

If you want to know someone and want them in your life, listen to them. They don’t need to know your entire story right off the bat, (It’s been four months and he doesn’t know mine).

People are generally egoistic, and showing your potential partner that you want to know about them, what moves them, what motivates them, and what type of person they are will go a long way.

I’m not saying you should listen with a goal in mind. Don’t think to yourself, “Aha, if I listen to him or her, he/she will want to be with me.” Listen because you care. Listen because the world doesn’t revolve around you and your needs all the time.

Human beings are amazing creatures, and every single one of us has different fears, needs, and desires. The more time you invest in understanding your potential or current partner, the more you will get in return.

Some days we would be in the middle of texting and he would suddenly *poof* disappear. I was left confused and irritated.

The next time it happened, instead of assuming he didn’t want to talk to me or he didn’t care (which is what I would normally do), I asked him about it and he told me why it happens. And of course it had nothing to do with me. Victory!

Instead of saying nothing, I said, “I’m trying to understand you, and sometimes when we’re in the middle of talking and you suddenly disappear. Why is that?”

I asked because I truly wanted to understand. I didn’t blame him. It took a lot of courage to ask, as I normally just make up answers in my head and put up walls, so I was really proud of myself for doing it.

Most of us tend to jump to conclusions about how others feel because we view the world through our tinted lenses. This is fairly normal, but it can lead to confusion, misunderstandings, and anger if you do it all the time. Try to step outside yourself and see how others may perceive you or perceive the world.

When you want to share your feelings or communicate what is going on with you try not to say, “You make me feel x, y, z when you do x, y z.”

People don’t make you feel anything to you. Their actions may trigger certain feelings, based on how you interpret them, but it’s also possible you are already feeling depressed or anxious or lonely or scared, and only think the other person is making you feel that way.

We all choose what we believe and how we interpret the things other people do, and those beliefs and interpretations create our feelings. The other person can’t possibly know what’s going on in your head unless you explain to them that you have these insecurities and that it isn’t their fault, but you want them to know.

When you come from a place of insecurity, you will often project blame onto the other person when it’s possible that what they did or said had no negative connotation whatsoever.

Sometimes people are clueless, sometimes thoughtless, sometimes self-absorbed, but most of the time their intention isn’t to hurt your feelings. Try to remember this before you speak.

Learn to Communicate From Love

Love and intimacy are scary. There are days when I still struggle with whether he cares, and I suddenly go quiet and retreat into my world.

My natural reaction when I’m falling in love is to want to run, and run fast. I want to put up walls and let the other person try to climb over them, as I’m sure many of you do as well. I’m sure you also know this isn’t remotely healthy and is only a protective mechanism.

Communicating from love means letting down your walls, even if just a little, and accepting the possibility of being hurt.

One day I was talking to him about my blog and how it means a lot to me when people are thankful for what I write or appreciative of my stories. Because he was playing on his computer and didn’t seem to be listening, I felt unimportant.

I became quiet. My plan was to say nothing. I assumed he just didn’t care to listen. My old patterns were creeping back in. However, this time I realized that if I want to keep moving forward and keep changing, I had to share my feelings instead of running inside myself.

I know that most of my fears of not feeling important stem from my childhood and my issues, and it isn’t fair to push them on him. I told him, “Sometimes I don’t feel important to you.” Just saying it was a relief.

I could tell he didn’t have a clue what I was talking about. He said, “Of course you’re important and I care about what you have to say.” I realized in that moment the fears I had were my own and weren’t rooted in any truth.

It can feel monumentally scary and overwhelming to share even little fears, but if you do it in a way that shows your vulnerability and if you are with someone who has any capacity to love, then you will be amazed at the results you get.

By doing all those things I mentioned above, I changed my relationship. When I gave to him he gave back. The more I put out the more I got in return. I stopped making the entire relationship about me. Everything has changed, and it’s all because I chose to change it.

Remember that in the end you have no control over anyone but yourself. If you want or need something, stop looking to the other person to give it to you and start looking to yourself.

You can change your life and your relationship patterns. It may not happen overnight and it may not be as fast as you want, but have some faith and keep moving forward. Love will happen.

How to Prevent Fear and Insecurity from Ruining Your Relationship