How to Really Live Instead of Merely Existing
By Monica Lane 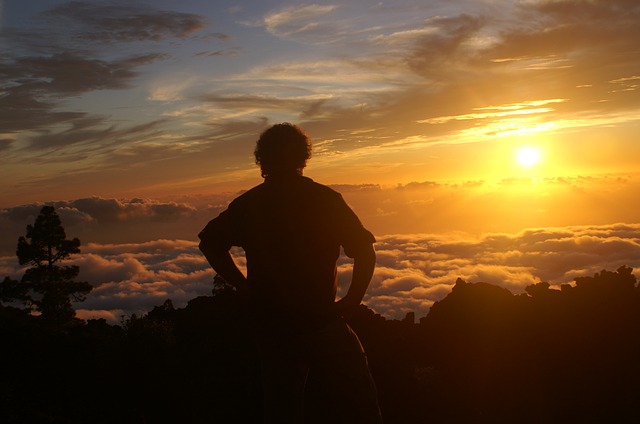 “Come here and take Dora out to get some milk.”

With those simple words, I knew my father’s time was short. Not a man to ask for help, I knew that milk was just an excuse to get me to come to his side.

My father was a gruff, angry, bitter man who had sealed himself off from nearly everyone. I spoke with him at 7:00 am every Saturday morning for fifteen years. In those conversations he complained about nearly every human interaction he had experienced in the space between my calls.

I rarely missed a call and usually alerted him if I knew I would not be able to call him at the designated hour. Nonetheless, he was blunt about his annoyance if 7:00 am passed without a call, and I heard about it loud and clear.

But, even though I lived only thirty minutes away and my calls were obviously important to him in some way, I actually saw him only about once each year. That was the way he wanted it.

That February morning when I arrived at his apartment, I was shocked by what I saw. Dad gasped for air and he was thin, so thin that I could easily make out the knobs of his knees under the jeans that gaped at his waist.

A walker I didn’t know he needed was parked beside his chair. A wheelchair borrowed from a loan closet was folded beside the front door. I had no idea that my father was so ill, and obviously had been very ill for a long time.

He didn’t protest when I told him I was calling 911.

At the hospital, he yielded to the efficient care of the attending ER physician. He didn’t like it but he yielded, eyeing the doctor with suspicion.

Dora, my father’s companion of more than twenty years, fretted that people die in hospitals, and she wanted him to come home to their apartment before something awful happened to him.

Hadn’t something awful already happened? Didn’t it happen a long, long time ago?

By all accounts, Dad was a sweet child, a devoted son and brother, an irreverent jokester. But, his marriage to my mother was loud, tense, and turbulent because of her mental illness and his dependence on alcohol.

Nonetheless, when she died three decades ago, he took her death very hard and really never recovered.

Long before he entered the hospital that day, from childhood through adulthood and into his later years, my father died bit by bit. He lost his sweetness. He grew hard and mean and he drew high walls around Dora and himself.

For a time, Dad and Dora had a dog. When the little Cairn terrier died, they closed in even tighter, virtually never leaving their apartment except to venture to the grocery story less than one mile away.

During the week between his arrival at the hospital and his return home to his apartment under hospice care, I learned a lifetime of lessons from my father.

At the time, I was grieving the end of my own thirty-five year marriage and I was suffering. I had resolved some time before never to become bitter or angry at my husband or at life, but watching my father approach death as someone already dead truly taught me that lacking bitterness and anger was not enough. It was time for me to live.

What were those lessons that taught me to live?

Don’t let your opinions get in the way of being aware. I had not been able to see my father clearly because I judged him for how he lived and how he treated others. Judging him for that did not change him. But, in letting go of my judgment of him, I did change myself.

Unfulfilled expectations lead to disappointment. When you release your expectations, you become open to options. In a sense, your world broadens and you invite possibilities that otherwise might not exist.

I watched my father’s world grow smaller as he experienced disappoint throughout his life. In having specific expectations, he missed many of life’s opportunities. Likewise, when I released my expectations about him, I found myself much more comfortable in his presence and far more patient with his actions.

Lesson 3: Let the light in.

As hard as it may be to throw open the curtains and let the sun shine in, just do it. Look for the good.  Surround yourself with positive people. Pursue activities that you enjoy.

My father rejected the very things that could have let the light in for him. He ended relationships. He stopped going out into the world. He kept the walls up and people out.

In my own way, I had done some of the same things. As my marriage frayed, I had hunkered down declining to participate in my own life. When I realized that, I began to reach out to my friends and family. I picked up my camera and took myself to my favorite photography spots. It was hard when I started; it got easier.

Lesson 4: Fall in love with who you are. Right now.

Don’t wait until you lose ten pounds, finish your degree, learn a second language, climb Mt. Everest, or even finish your morning coffee. Commit to loving yourself as you are right now. My father had complicated views about himself and others. I suspect he didn’t like himself much. I doubt that he ever gave much thought to whether he loved himself.

As his life was winding down and my marriage was ending, an interesting thing happened. At that improbable time, I chose to love myself.

I committed to treating myself kindly and gently. I allowed myself to become aware without judgment. I released myself from unreasonable expectations I had about how I should be. I gave myself the freedom to be positive and enjoy.

In that week, I came to see my father for exactly who he was and to love him fiercely despite the angry face he showed the world. I also came to lovingly acknowledge that in a short time I would be letting go of him as well as my marriage.

On the other side of that acknowledgment I knew I would find my new life and I would thrive.

Monica Lane is a pediatric physical therapist and lifelong learner. She is the mother of four, grandmother of two, and girlfriend of one terrific guy. Two years ago, she picked up a camera and discovered the bliss of a day lost in pursuit of a powerful photo.