How to Stop Gossiping and Creating Drama
By Shanti Sosienski 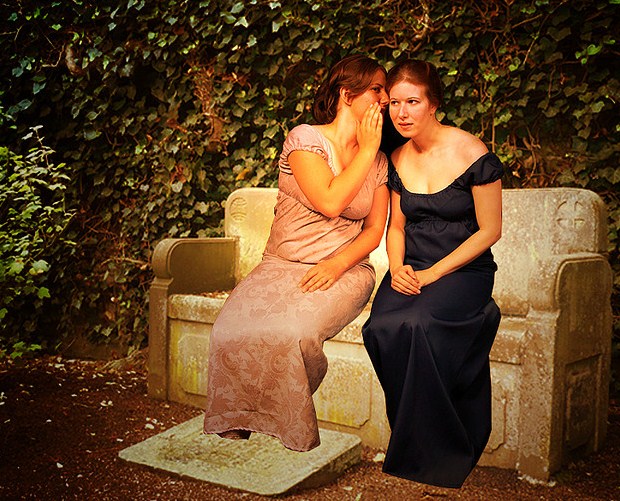 “If you propose to speak, always ask yourself, is it true, is it necessary, is it kind” –Buddha

Last week my twenty-year-old friend, Dustin, called me out when I was talking negatively about someone to a group of people.

We were sitting around a dinner table at what should have been a really good planning meeting for an upcoming yoga workshop our group was holding.

While we were excited about the out-of-town teachers who were coming to share their incredible knowledge with us for a week, we were stuck on a topic that was both irrelevant and unproductive. That topic even had a name.

For the purpose of this piece I will call her “Jessica.” She practiced with us from time to time, and in spite of the fact that she wasn’t a regular, when she did come her practice brought drama and disruption to the harmony we were trying to create.

When she didn’t show up for a class, no one seemed to mind all that much or try to get her back in the fold.

Yet somehow on this night when we had so much coming up in less than two weeks, there was Jessica, invading our conversation. I can’t remember who first brought her up, but I have to admit, I think I was the one belly-aching the most about her and what she may or may not have done.

Finally Dustin quietly piped up. “Can I say something?” he asked the group.

All eyes turned to Dustin with shock because he so rarely spoke and was never, ever, ever confrontational.

“I don’t want to offend anyone, but I have to admit I am really tired of hearing about Jessica and what she did and didn’t do. She doesn’t really matter tonight. Our focus should be on all of this stuff we have to get ready and our energy would be best spent there wouldn’t it? Besides we’re just sitting here saying negative things about her in this beautiful space where we’re supposed to be preparing something really positive.”

As he spoke his normally soft voice grew louder and a smile broke out on his face. After he rambled on for another minute he got a little self-conscious then said, “Wow. That felt good. I have never spoken up against a group like that.”

He was right. Being double his age and often the leader of the group, I realized at that moment how much I had been a participant in all of this unnecessary talk about Jessica.

Not only was it catty, but also it was just negative words filling the normally peaceful air around us.

And what’s more, Jessica wasn’t there to defend herself, and our conversation did nothing to enhance our lives.

With that we put the image of Jessica away, and with it cleaned the space for another hour, getting rid of cobwebs, dust, and bad vibes (some of which we had obviously created in our little rant).

For some reason, that experience with Dustin had a profound effect on me for the next few days.

I realized that the ritualistic practice we had all been engaging in is most commonly referred to as “gossip,” and it’s not a good habit. While women get accused of it regularly, I have known plenty of men to participate and even fuel the fire quite well, as had been the case that night.

Today I decided it’s time to create a new practice in my life when I find myself engaging in conversation which waivers dangerously toward the “g” word.

When you find yourself repeating a name over and over again in a story, stop after the second repeat (even if it’s a different story). Now ask yourself how bringing this up is bettering the world.

2. Pause for a moment and take some time to think about that person.

What is at the root of the problem there? Could you be so annoyed by it because it’s familiar to you and might be a practice you are guilty of, too?

3. Look for a solution to the real problem.

If you find that someone is constantly challenging your world in a way that doesn’t feel positive to you, can you remove that person from your life? If it’s your mother-in-law maybe not, but how can you work through or around this challenge?

4. Don’t let stories get out of control.

If this person is someone who is going to continue to be in your life for a very long time, it’s important that you don’t let the stories become just that—stories.

Tell them over and over and they morph and grow more fantastic with time. Look at what’s important in that moment, focus on that, and let the gossip roll away.

5. If you absolutely must talk about this person, give yourself a time limit.

Look at a clock on the wall. Tell the story in one to two minutes. Wrap it up. Change the topic.

Doesn’t that feel good just thinking about it?

Shanti Sosienski is a freelance writer, website developer, producer, event organizer, flying yoga teacher and has a few other hats she wears. She loves people of all shapes and sizes and has 1958 Facebook friends that she actually knows. Check her out at www.thekohacenter.com.

How to Feel More in Control When Life Gets Overwhelming