Let Loss Remind You to Live
By Alexa Peters 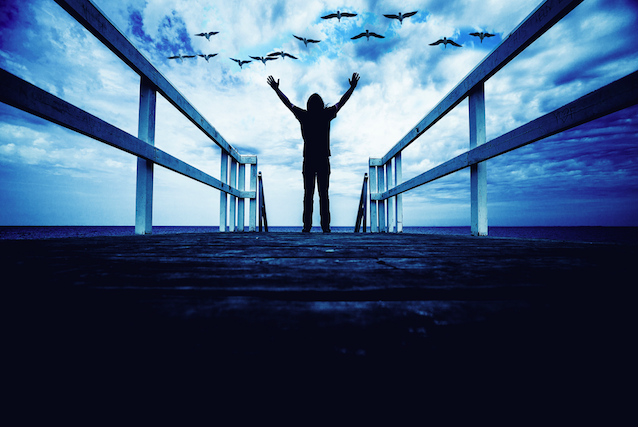 “Pain can change you, but that doesn’t mean it has to be a bad change. Take that pain and turn it into wisdom.” ~Unknown

Experiencing a death of someone, no matter how close you were to them, is a shock to the system.

One moment you’re just drinking your morning cup of Joe and then suddenly, you’ve collided with the uncertainty of existence.

Daily, we do everything we can to numb ourselves from our own fragility, but sudden death reminds us all that impermanence is still there under the surface, throbbing.

The other day, I logged onto Facebook and received a message from an old coworker. He asked me how I was and we exchanged the usual pleasantries, until, he dropped a bomb.

“You should know, Armando was killed in a car accident last week.”

Armando and I were not extremely close, but we were friends during the eight months I worked at a café with him.

We got to know each other when I began opening with him on Sunday mornings, me arranging box after box of fresh pastries in the case, him preparing the hollandaise sauces and turning on the ovens.

Sunday mornings were always slow, so Armando and I got a lot of time to chat and goof off.

We made a game out of calling each other the wrong names, which Armando especially loved. “Eighty-six croissant, Karla,” he’d yell from the kitchen, and I’d shoot him a, “right-o, Archie,” that would have him doubled over in laughter.

Armando made the monotony of our workdays colorful and fun, and I was always so thankful when he was on my shift.

Fast-forward to the day I found out he was gone. My impulse was to lump his death in with the rest of the bad news we are bombarded with every day. After all, I thought, we hadn’t been friends for long.

I was ready to downplay his impact on my life, to distract myself from the email about his memorial, to numb myself from the pain of loss. Really, I didn’t think I had the right to be upset about the death of someone I barely knew.

Except, there was still a knot in my gut that these thoughts weren’t helping to unwind. Armando brought joy and laughter into my life during a time when I was worn out from working three jobs and feeling lonely in a new city.

His light-heartedness often shocked me out of my bad moods, and no, I hadn’t known him well, but I could still be heartbroken the world had lost his light.

Then suddenly I was driving in my car, the same invention that killed Armando.

I wound through the streets of Berkeley, past the café we worked at together and the BART station and the library, and I let myself think about Armando. The special strawberry salad he used to make me and a coworker on our breaks, the times I got red-cheeked from catching him and his girlfriend kissing in the storeroom, the night of the wild Christmas party when we all went out and sang karaoke.

I thought about how he told me he wanted to move back to Mexico City, how much he loved it there. I let myself remember that he was more than a percentage or trending story, but a beating heart. I let myself cry for him.

Then I reminded myself: it’s okay to let yourself be affected by things.

Acknowledging tragedy puts our own fragile existences into question, and it forces us to face that we could’ve been the one who died suddenly.

That is a scary realization, but I say let it scare you. Let it put a fire under you. Let your limited time on this planet propel you toward your dreams with incalculable fervor.

Perhaps most importantly, let it make you grateful for the people around you who bring joy and laughter and love into your world, however fleeting.

Man on a pier image via Shutterstock