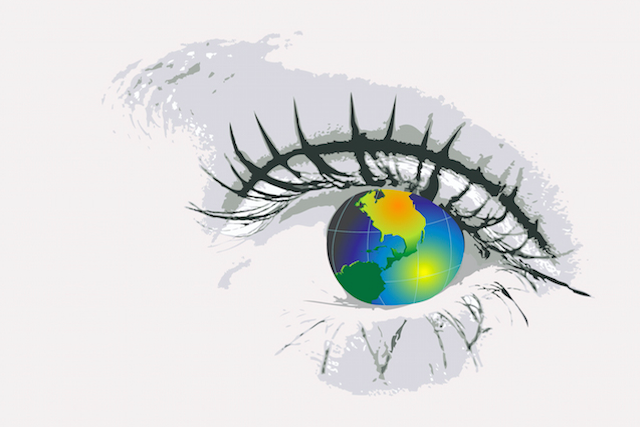 “How much pain has cost us the evils that have never happened.” ~Thomas Jefferson

When my friend said she worried about the kind of future world her grandkids would live in, her daughter and I stared in disbelief.

My friend’s daughter is quite a bit younger than me, but our kids are the same age—she came to motherhood early, I came late. Over the years I have watched as this young lady has absolutely blossomed as a mother and as a member of our society.

Her conversations are intelligent, witty, and insightful, but most precious of all is her ability to ask questions that make people think, to question their beliefs, without creating a defensive reaction. It’s a beautiful thing. As her mum was questioning what the future would be like, my first thought was “with people like this in our younger generation, why worry?”

The Earth right now, our people and our society, are a reflection of yesterday’s actions.

Given our actions are driven by our thoughts, I’m really not in the least worried about our future.

Sure, I can browse the internet, watch media, or walk out my front door and spend time observing the kind of behaviors that created the world we live in today. In fact, it’s fair to say there are many things we can look at and feel utterly horrified about.

The fact that we do is the catalyst for change.

A few years ago I watched an Australian drama series called Puberty Blues, set in the 1970’s, but played by actors born in the millennium. Having grown up in the 1970’s, I could relate to a lot of the experiences the young characters were going through.

However, the most striking thing was an interview with the actors that I read; they were being asked how different their characters’ experiences were from their own.

The boys felt that their 1970’s counterparts suppressed a lot of their feelings, masquerading as macho men. One commented how common it is these days for male friends to hug each other, which would have been unheard of then. The girls commented on how subservient to whims of the boys their counterparts were, something they themselves couldn’t contemplate.

I was astounded, and rather reassured. In just thirty years, society has apparently evolved more than it has in hundreds (if not thousands) of years. The patriarchal ego has been called out; the feminine traits within us all rising to create more of a balance it seems.

Then there are the likes of Boyan Slat that I saw on a social media site a few years ago, the young Dutch student who invented a way to clean up our ocean’s plastics and is now trialing it, and Melati and Isabel Wijsen, sisters from Bali that I found via Google, who founded Bye Bye Plastic Bags in 2013 and now the entire island of Bali is declared free of plastic bags—with the whole of Indonesia planning to ban all plastic bags by 2021.

You only need to search “young people changing the world” or similar and you will find countless examples, ranging from environmental to humanitarian. It made my heart soar.

Yet I need not look even that far; there are my own kids, and my friend’s granddaughter who were all happily playing together as we had this conversation. These are really enlightened kids.

Just a month or so ago I had been reading a kids’ book about people who changed the world. This particular story was about Martin Luther King Jr. My daughter’s eyes went wide as she took it all in. I could see her wrangling with the injustice of it all and saw a look of what I’d describe as determination appear on her face.

One of her friends had been reading another children’s book about women who changed the world, and she knew the story of Rosa Parks. I listened to them discuss it in depth as we did a scavenger hunt around a local nature reserve last week.

These two seven-year-olds and an eight-year old friend, along with my younger child who, despite bouncing around the room at the time we had read Martin Luther King Jr.’s story, had obviously taken in more details than I would have given her credit for.

Future activists, these kids. Not simply on the topic of equality, but they are informed about environmental issues, diet, money, healthcare, education, politics, and government. This isn’t just because they grow up in homes where we take an interest in these things; it’s because society at large is starting to take an interest.

They are assessing this world and seeing things they like and dislike, and have the energy and sense of self-worth to believe things can be different. They know they have choices in the way they do things, and it seems likely they will.

Our kids may not go out and start a movement, but their thinking will lead to actions that change the world.

Tonight when we watched Disney’s WALL-E movie about a future Earth that was simply a huge garbage dump that humans had abandoned 700 years before, the kids asked so many questions about it, I am sure they came away with a strong resolve that that was not going to be the kind of future they live in.

Sure, these are just my kids and my friends. However, I see a world full of people just like that, and we are certainly not leading lights when it comes to most of this thinking; we are simply following because it resonates and makes sense.

In the last decade alone, the amount of choice on supermarket shelves has increased amazingly to incorporate environmentally friendly, free range, and organic produce. Many more independent, locally owned and operated alternatives have sprung up too. Even produce sold for cash along the roadside sports signs such as “spray free.”

Pharmacies now stock many more alternative and complementary healthcare products. Even doctors are starting to recommend a broader context for treatment than the pharmaceuticals at their disposal. The world is a changing place.

It really was surreal to listen to someone who has awareness of all these issues express worry, at the same time sitting there with future generations who are so overwhelmingly wise, empowered, and enlightened.

To be fair, it’s crazy to worry about anything. No amount of worry ever solved anything.

The worry was more of a habit. One I am not immune to myself, on a myriad of fronts, but mainly when it comes to my personal behaviors and achievements. In other people and in the future of this planet, I have every faith.

In the hands of our next generation, I’d say the future looks absolutely bright.