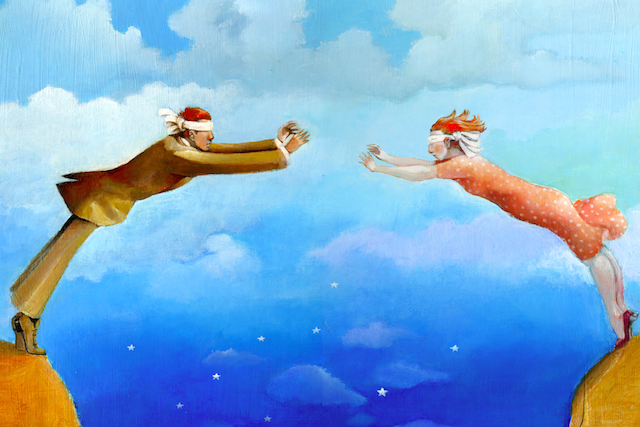 From a young age, I felt insecure in my own skin. I was a highly sensitive child and, subsequently, struggled with low self-worth for most of my life.

Although I had many friends and a good family, I consistently looked for approval outside of myself. I grew up believing that the opinions of others were the only accurate representations of my core worth.

As a teenager, I witnessed the crumbling and eventual demise of my parents’ marriage. During these years, I felt a lot like an island.

I was often plagued with a dark, mysterious unhappiness. The standard teenage growing pains conglomerated with the trauma of losing my familial identity. In a desperate attempt to counter these negative feelings, I sought the approval of others; when it was not provided, I felt like a failure.

I was caught up in vicious cycle of seeking outside confirmation that I was good enough.

At school, I adopted the role of boy-crazy-funny-girl. I wanted to be adored and nurtured and cherished.

I kept a list of all the cute boys at my school and spent hours daydreaming about a blissful, fairy tale love.

I consistently focused on seeking happiness outside of myself. This habitual practice, over time, led to an inability to be content unless something or someone was providing validation. Most of the time, I felt like I was not good enough.

This falsely instilled belief led me into a decade-long struggle with codependency.

The first codependent relationship I was involved in began when I was nineteen. He was ten years older than I was, and, unbeknownst to me at the time, a cocaine addict.

Our routine was unhealthy and unproductive. We would spend our weekends drinking and gambling at a local pool hall. More often than not, I spent my entire weekly paycheck by the end of Saturday night.

He belittled me, called me names, and consistently criticized my appearance and weight. He compared me to his previous girlfriends. I began to see myself as an incomplete person, one who was in need of major repairs and upgrades. I was so emotionally fragile that the wind could’ve knocked me over.

In a frantic effort to self-preserve, I adopted several fear-based behaviors. I became obsessed with him. I was controlling and jealous. I needed to know everything about his past. I wanted desperately for him to accept me.

Over the ten months we spent together, I neglected my body and mind. My weight dropped a staggering thirty pounds. I was completely disconnected from my family and friends. I developed severe anxiety and suffered crippling panic attacks. I knew something had to change, so I gathered the courage and left him behind.

I thought that I was rid of this unhealthy and unsatisfying lifestyle, but the bad habits carried into my next two relationships.

I spent four years with a person that I loved very much; however, his alcohol dependency brought all of my insecurities and controlling behavior back into play.

We spent four years flip-flopping between wonderful loving moments and horrific physical fights that left us both numb and depressed.

When this relationship ended, I sought comfort in yet another unavailable partner, one that could not provide me with the stability that I so badly needed.

Such is the nature of the codependent person. We seek out what is familiar to us, but not necessarily what is good for us.

After logging close to a decade-worth of codependent hours, I finally faced myself. I knew that if I didn’t make significant changes, I would be forever trapped in a life that was unconducive to my spiritual and emotional growth.

In a scene eerily similar to Elizabeth Gilbert’s Eat, Pray, Love bathroom breakdown, I faced the music. I got myself a small apartment and started my recovery.

The first few days spent alone were absolutely torturous. I cried and cried. I had trouble doing basic tasks, like walking my dog or getting groceries. I had completely turned inward, nurturing my turmoil like an old friend. Anxiety-ridden and lonely, I did the only thing I could think of: I asked for help.

The first step I took was ordering Melody Beattie’s book Codependent No More. This is probably the most significant self-improvement book I have ever read. I felt a weight being lifted as I read, page by page.

Finally, I was able to understand all of the behaviors, feelings, and emotions I had struggled with for so long. I was a textbook case, my highlighter affirmed as I completed the “codependency checklist.” Perhaps some of these questions will speak to you, as well.

(You can read more about the habits and patterns of codependent people here.)

After acknowleding my codependency, I connected with an online support group for family members of addicts/alcoholics. This gave me a platform to share my story, without judgment, and little by little, I healed my aching heart.

The most significant things I learned on this journey are:

1. Without change, nothing changes.

This is such a simple yet profound truth. It’s reminiscent of Einstein’s definition of insanity: doing the same thing over and over and expecting different results. The cycle of codependency can only be overcome by establishing and nurturing a super-loving relationship with yourself. Otherwise, you will continually find yourself in unhealthy, codependent relationships.

Over the years, I was constantly trying to control and micromanage other people’s behavior, in an effort to escape my own negative feelings.

I chose partners with alcohol and drug dependencies. Often, I chose angry and avoidant men. By focusing on what was wrong with them, I could ignore what was empty and unfulfilled in me.

I thought, naively, that this would give me a feeling of stability. In fact, it did the opposite. Surrendering the need to control other people provides us the necessary space to connect with ourselves.

3. Love and obsessions are not the same.

I falsely believed for many years that love and obsession were one and the same. I gave so much of myself to my partners, naively thinking that this was the road to happiness.

I’ve learned that real love requires both partners to have unique, individual identities outside of the romantic relationship. Time alone, time with friends, and time to work on personal projects allows you to really connect when you are together, without feeling suffocated. We build trust when we afford ourselves, and our partners, some breathing room.

For many years I neglected my own needs. I now prioritize personal time to do individual activities: reading, writing, walking, reflecting. I started to heal once I learned to incorporate self-love rituals into my life. One of my favorite things to do is spend the evening in a warm bubble bath, light some candles and listen to Alan Watts lectures.

4. Life is not an emergency.

This is a biggie! I consistently lived in a high-stress vortex—terrified of people, abandonment, and life itself.

I worried so much about all of the things that were outside of my control—often, other people. I realize now that life is meant to be enjoyed and savored. Good and bad things will happen, but with a centered and balanced heart, we can get over any obstacles.

The key to balance, for me, is to live fully in every moment, accepting life for what it is. Even when I’m feeling down, I know that the Universe has my back and everything in life is unfolding as it should.

If you don’t hold this belief, it might help to remember that you have your own back, and you can handle whatever is coming. When you trust in yourself, and focus on yourself instead of others, it’s much easier to enjoy life and stop living in fear.

I have assembled a group of super-hero coaches and teachers that have helped me significantly over the years in my quest for self-improvement. I have loving support and encouragement from so many sources. It’s my dream to be able to give some of that back to the world. I hope I have done that with this post.

When not devouring every foreign film she can get her hands on, Ariane loves snuggling with her pug and running tirelessly down the road towards self-fulfillment. Though she is excessively organized, she is spontaneous when it comes to love. Follow Ariane’s blog The Shadow and the Shimmer at www.theshadowandtheshimmer.blogspot.ca.

When Something Has to Change: How to Push Yourself to Take Action