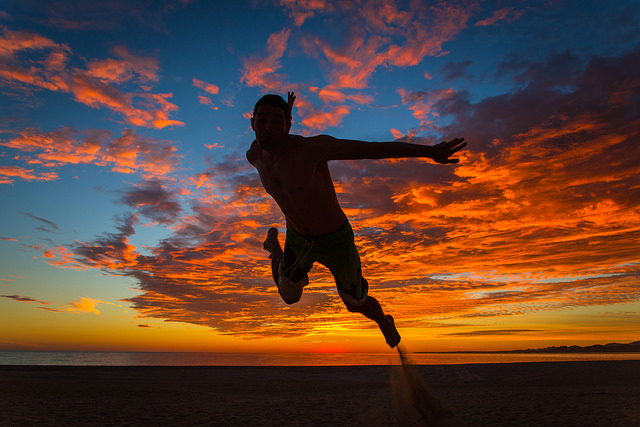 I still remember how I felt crossing the finish line after my first 10K race. I was elated. I felt like I could conquer anything.

I realize that for all you marathon runners, 10K may not seem like a big deal. But for me, it was monumental. Up until the two years prior to running my first race, the only running I did was in gym class (and only after trying anything I could think of to get out of it).

But somehow, one of my good friends convinced me to give it another shot. We enrolled in a “Learn to run” class. I have to admit, I felt pretty embarrassed taking a class that promised to teach me how to run. Shouldn’t I already know how to run?

But I showed up and I participated. For the first “run,” we practiced running one minute, then walking for two minutes. I thought I was going to die. Running for one minute felt excruciating. It wasn’t that I was out of shape. I went to the gym regularly. I tried to take care of myself.

But running—that was totally different. It felt impossible. Unachievable. I wanted to quit. I was not a runner after all. Why was I even doing this? What was I trying to prove?

This switch completely changed everything. I had started out believing that I wasn’t a runner, and that running was too challenging for me. After all, I struggled to run one minute straight. Now, just a few weeks later, I was running ten minutes straight for a total of five kilometers.

I realized the power that my thoughts had over my abilities, and how by taking small steps to push myself outside of my comfort zone, I was able to completely change how I thought of myself.

I no longer thought of myself as unable to run. I was now a runner. And as long as I continued to stretch, there was no limit to what I could do. I pushed through and ran my first 10K race the following year.

I don’t want to pretend that the whole process was easy, or that there weren’t challenges along the way. Each time I came to a plateau, I had to really challenge myself to go just a little further until that new place felt comfortable.

I learned to celebrate the small victories along the way. I learned that running really is 90 percent mental.

The most important piece of this whole experience, however, was learning that I was unknowingly placing restrictions on what I can accomplish. Where else had I decided I “just wasn’t good at that”? Where else was I failing to push myself out of my comfort zone?

Now, as a business owner, I can see the same process repeating itself. I’ve exposed myself and my work for everyone to see. I’m vulnerable. I wonder if I have what it takes. I come up with excuses for why I can’t show up, just like I did in gym class.

But this time I know that I have conquered this mental crap before, and I can do it again. It’s not easy, but I can push myself—take those small steps each day—until I reach my goals. I can celebrate the small victories along the way. I know that it is 90 percent mental, and I’m ready.

I would invite you to take a look at your life and ask yourself where you’re not showing up fully. For me, this shows up as excuses and stories that I tell myself and others when I feel challenged. It shows up as self-made boundaries that keep me feeling small and safe.

It isn’t until you begin to recognize your own sabotaging behavior that you are able to start shifting your beliefs. Once you start believing in yourself, you’re able to take those small steps forward that previously felt overwhelming or insurmountable.

“Believe in yourself, and the rest will fall into place. Have faith in your own abilities, work hard, and there is nothing you cannot accomplish.” ~Brad Henry

Michelle Kirsch is a transformational coach & writer who helps women increase their clarity & confidence and build a business that feels true and authentic. For fresh ideas & inspiration to create the business and life you desire, visit http://michellekirsch.com.

Using Our Passions While We Can And Never Giving Up