Overcoming the Fear of Loss: 5 Steps to Get Unstuck
By Lori Deschene 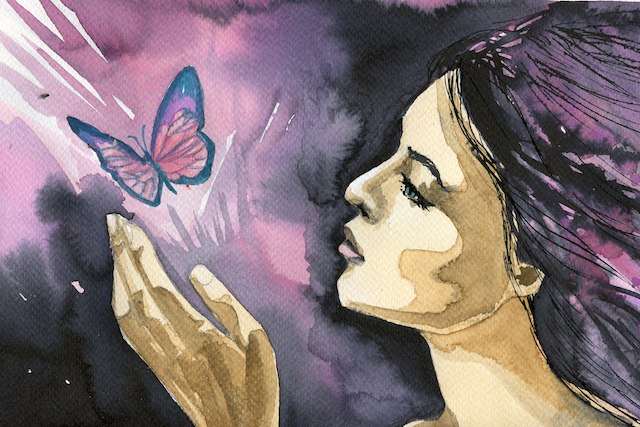 Of all the things that scare us, loss can seem like the most terrifying. At times, I’ve thought about it with such dread that it’s felt overwhelming.

Whenever I considered leaving a bad relationship, I felt paralyzed by two similar fears: the fear of losing my chance at fulfillment by staying, and the fear of losing the comfort of companionship if I walked away and didn’t find someone else.

I haven’t only worried about the potential for loss as it pertains to big decisions. I’ve worried about losing people I love, pleasures I enjoy, and circumstances that feel comfortable. I’ve dreaded losing my youth, my health, and my sense of identity.

I might even go so far to say that whenever I fear something, loss is at the root of it. I suspect I’m not alone.

Economists have identified loss aversion as a major factor in financial decision-making, in that most people would rather avoid losing money than acquire more. The psychological impact of losing is thought to be twice as powerful as the pleasure of gaining.

According to Ori and Ram Brafman, authors of Sway: The Irresistible Pull of Irrational Behavior, we often make poor decisions simply to avoid loss.

One example they offer involves Captain Jacob van Zanten, once a well-established and respected pilot who headed the safety program for KLM—a Dutch airline marketed as “the people who make punctuality possible.”

In the spring of 1977, on a flight from Amsterdam to the Canary Islands, van Zanten learned that a terrorist bomb had exploded at Las Palmas airport, where he was supposed to land. Along with a number of other flights, his was diverted to a smaller airport 50 miles away.

After landing the plane safely, he started worrying about a number of problems that would result from failing to take off soon.

The government had instituted a mandated rest period between flights for pilots, which meant he could be imprisoned if he took off after a certain hour. Staying overnight meant putting the passengers up in a hotel, which would be costly for the airline.

Waiting much longer meant losing time, money, and his reputation for punctuality.

Ultimately, van Zanten took off in a thick fog—despite knowing the risks, and not receiving take off clearance—because it seemed like a now-or-never moment. He didn’t see the Pan Am 747 across the runway until it was too late—and 584 people died as a result.

The pressures and potential consequences of lost time piled up, and van Zanten acted against his better judgment, hoping to evade them.

We all make irrational decisions everyday simply to avoid losing.

We buy things we don’t need (or groupons we won’t use) because a sale’s ending soon. We grab an item of clothing because there’s only one left and someone else might take it—even if we aren’t really sure we want it. We keep gym memberships we aren’t actively using if we know we won’t be able to get that same rate again.

And then there are the bigger things.

We turn down opportunities that could be rewarding to avoid the risk of losing something else that feels good enough. We use our time in ways that feel unfulfilling because we fear losing time on a decision that might be wrong. And we fail to invest in ourselves, even though we’re aching to expand, because it can feel painful to part with our money.

I waited months to create my Tiny Wisdom eBooks because it would require a large investment. If I hadn’t taken that risk, I wouldn’t have earned the money I’m now using to revamp the site, and take acting classes—something I’ve wanted to do for years.

We can’t ever know for certain that a risk will payoff, but we can choose to recognize when the fear of loss motivates our actions, and make a conscious effort to overcome it. If we don’t, it can severely limit our potential for growth, happiness, and fulfillment.

Overcoming the Fear of Loss

I first recognized this fear, and its associated irrational thoughts and behaviors, when I felt devastated after a man I wanted to break up with broke up with me first.

I realized I didn’t make the decision myself because I preferred a bad relationship to being single. I also understood that I would have been far less affected if I’d made the choice to walk away, and that my feelings completely transformed because I felt out of control—like I lost something, and it wasn’t my choice.

Since then, I’ve developed a little system for identifying this fear when it takes hold—and a few practices for overcoming it so that it doesn’t overcome me.

This may seem like an obvious question, but I’ve learned that it’s all too easy to go through our days, making choices, without recognizing the underlying feelings that motivate them.

Whenever you have a choice to make, recognize in what way you’re motivated by the fear of losing something, whether it’s comfort, security, control, money, companionship, or something else.

Once you understand what you’re scared of losing, you can…

There was a time when I worked sixty-plus hours/week to hold onto a job I didn’t even want. I was the last remaining US employee after a massive layoff, but I didn’t feel ready to lose that job.

After several months of working long hours from home, I realized I’d never feel ready. It wasn’t until I finally got laid off that I started planning for this site.

My logic was faulty—that it was best to stay with the sure thing, because I wasn’t ready to do something else—because the reality was that I needed the time and space to figure out that something else.

In other words, loss was necessary to set me up for gain; it wasn’t the other way around.

When you attempt to see beyond the fear, you’re better able to recognize if you’re keeping yourself stuck—and if you’d benefit from letting go of what you think you need.

3. Use loss aversion as motivation to pursue what you really want.

If you hang a large calendar on your wall, and put a star on every day when you do something positive—like exercise, practice a new hobby, or send out a resume for a new job—you’ll create a psychological need to keep that streak going.

Birken writes, “Your disappointment in seeing a day without a gold star is greater than your happiness at any single day’s work.”

Of course, you have to know what you really want first.

4. Regularly assess your intentions and motivations.

This ties into the last one. Sometimes we think we want something because we’ve wanted it for years—and then we feel scared to lose that dream and all its related rewards.

But sometimes, as we grow and learn about ourselves and the world, our wants change.

A friend of mine racked up massive debt studying law, only to realize a couple years into her career that it didn’t fulfill her as she hoped it would. She’d built her whole life around this possibility—and she had close to $100,000 in student loans.

She could easily have felt stuck, as if she’d lose too much if she walked away. But she did anyways. She moved to Chile and became a Pilates teacher, and though she ultimately realized she’d need to return to law for a while longer to pay off her debt, she’s released the emotional fears associated with pursuing a different path.

If you’re forcing yourself to do something and a part of you feels it isn’t right, ask yourself, “Do I actually want this right now?” There’s a chance you do, and you’re just feeling frustrated and discouraged—but there’s also a chance you don’t anymore. Only you can know for sure what you really want.

5. Change how you see the inevitability of loss.

The reality is that loss is inevitable.

We will all lose relationships, situations, and states of being that we enjoy and love. Even if we practice non-attachment, on some level we will get comfortable with people and circumstances.

You could say that this is what makes life beautiful and meaningful—since nothing lasts forever, each moment presents unique possibilities worth fully appreciating and savoring.

Or you could say this is what makes life tragic—that everything is fleeting, and eventually it all slips away.

How we choose to see things dictates how we’ll experience them. Would you rather see everything as precious or pointless?

If we can choose the former, we can recognize that every loss provides opportunities for future gains—new relationships, experiences, and ways of being that may fulfill us in ways we can’t possibly predict.

Of course, this can only happen if we trust in our ability to recognize and create these new connections and situations. We all have the potential to do it.

Some losses feel devastating when we experience them—and sometimes, the gain isn’t proportionate to the loss.

So I leave you with this question: Why are you afraid of losing? And are you ready to trust in yourself and your abilities so that you can get unstuck?