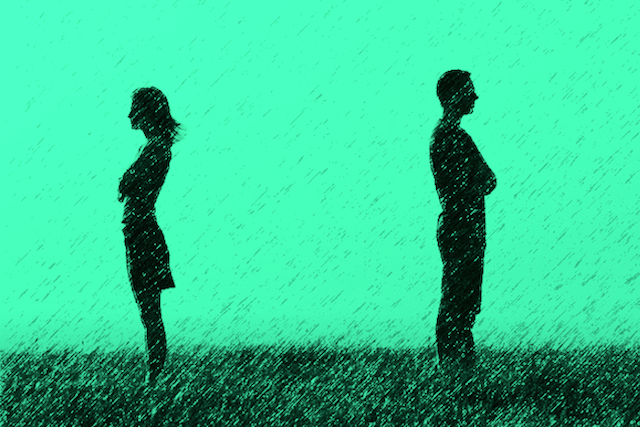 “Life becomes easier when you learn to accept an apology you never got.” ~Robert Brault

I’ve always tried to distance myself from people who are rude, overly aggressive, and mean. But sometimes we become tied to people who might not have our best interests at heart.

One summer I became involved with a coworker who was at a bad spot in his life. I thought I could help him through this tough time, but just like a swimmer drowning in a pool, he grabbed on and ended up drowning me when I reached out and tried to save him.

After several months of verbal and psychological abuse, I finally realized that the situation was out of my control. That night, after I got up to get a glass of water, he followed me into the kitchen and started yelling at me to get back into his room.

I did as I was told but I was not happy about it. He noticed my shift in mood and asked what was wrong. But when I told him it was because of how he’d treated me, he was surprised—a surprise which soon turned into a second wave of intense anger.

He could not understand that his actions had directly impacted me, and it seemed ridiculous to him that I would feel anything at all. When I started to cry, he was confused and started pawing at me to try to roll me on my back. It felt like I was being attacked by a bear who wasn’t quite sure if I was edible or not.

When I finally ended things, I told him I was not okay. That his behavior toward me was unacceptable. That I was very hurt by the hateful way he had treated me. That I could not and did not want be involved with him because he did not respect me as a person.

But this didn’t make sense to him. He told me that he didn’t have anything against me and that I should choose to feel differently. That I couldn’t possibly feel hurt because he didn’t feel hurt. He felt pretty good about things, and I should have felt that way too.

He couldn’t recognize that his actions were causing me pain, even when I directly laid it out in front of him.

I even used examples from his life of things that had hurt him and then tried to make the comparison that the same things that hurt him also hurt me.

I told him that I needed a lot of time, a lot of space, and a lot of compassion if we wanted to set things right and be on friendly terms at work. That he had to be nice to me and recognize that it would take a long time for me to feel okay. He agreed, and I thought we understood each other.

The next time I saw him was a few weeks later at a work party. He sat next to me on the couch, pulled out his laptop, and started to show me the weather forecast for the next ten days. I politely evaded and tried to end the conversation as soon as possible. I was not ready, and I did not want our first conversation as ‘friends’ to be a lecture on meteorology.

Shortly after that he started sending me hateful messages on Facebook, threatening that if I couldn’t get over it, I might as well find somewhere else to work. I tried to explain to him I was not ready, and that sending me hate mails was not getting me any closer to being ready. But he just responded with more hate.

After several weeks of silence and a trip out of the state for me, we restarted the conversation and we were actually able to address some of the issues. I reiterated again what I needed: compassion, patience, understanding, and kindness (and a face-to-face apology would be great too).

He agreed, and I finally had faith that things would get better. But these things never happened.

He never apologized, and shortly after our series of talks he returned to the mindset that I deserved to be treated that way, and that I was the one at fault.

The disrespectful behavior returned and, exhausted, I decided it would be easiest to just avoid him. After a few months of tactful evasion, I found somewhere else to work.

I could spend a lifetime showing him the evidence, bringing up witnesses who had seen what was going on, and explaining to him why it is not okay to treat people that way. I could bring in a professional psychologist, our manager, our coworkers, and our friends to verify that I was 100 percent entitled to an apology and deserved respect at work.

But would I ever convince him? Probably not.

I finally realized that sometimes, people are just mean. And there is absolutely nothing you can do about it.

I made the mistake of thinking that I could change him with compassion, patience, and understanding. But he did not want to change, so instead, I ended up breaking myself against his rock-hard resolve.

When someone is proactively threatening you and your happiness, seriously ask yourself: Is the juice worth the squeeze? Does this person respect me? Do they genuinely feel compassion for me? Do they want me to be happy? Or are they a drowning swimmer pushing me under just so they can breathe a little easier?

I don’t like to quit a project that I’ve started. But I learned that if this ‘project’ is an unhealthy or toxic relationship that is causing me damage, sometimes the best choice is to just walk away.

Sarah Charley is an explorer. She likes to explore everything from the backcountry of California to the mystery of the human psyche to advances in science and technology. She is also a writer when the inspiration strikes.