Review and Giveaway: The Art of Happiness in a Troubled World
By Lori Deschene 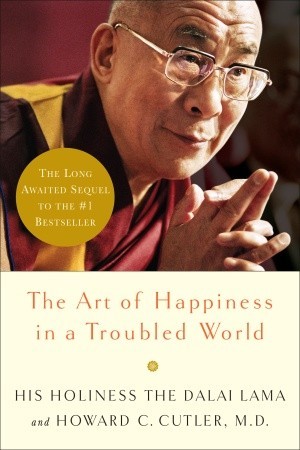 Update: The winners have already been chosen for this giveaway:

Is it possible to be happy in a world marred by prejudice, violence, and global disharmony—in a time when people often feel isolated from their communities, even in the most heavily populated places?

That’s the main question presented in The Art of Happiness in a Troubled World; and the answer is a resounding yes.

The fourteenth Dalai Lama has known tremendous adversity in his lifetime—having been exiled from his homeland of Tibet when communist China invaded in 1959—and yet he still believes that human nature is intrinsically good.

But that’s not the crux of The Art of Happiness; it’s far more than just Buddhist wisdom.

The book follows a series of conversations between psychiatrist Dr. Howard C. Cutler and His Holiness, creating a guideline for happiness that reflects eastern philosophy without ignoring western reality.

If you’ve never read any of the Dalai Lama’s work, you’ll find this book a comprehensive introduction to his basic philosophy: that the purpose of life is to be happy, and that many of the behaviors and thinking patterns we adopt early on in life compromise our ability to meet that goal.

The result is a book that thoroughly explores:

I’ve read several other books by the Dalai Lama but none of the previous in this series, which includes three. Dr. Cutler’s probing questions elicit the type of answers that, I feel, would satisfy even the harshest cynic.

I put this book down feeling inspired and enriched. Above all else, the conversations and stories reminded me our perception of human nature influences our interactions with people; and that ultimately determines whether we live in a peaceful or hostile world.

If you’d like to receive a free copy of The Art of Happiness in a Troubled World, retweet this:

Then comment below so I’ll be able to contact you by email. I will choose five winners randomly on Wednesday.

FTC Disclosure: I receive complimentary books for reviews and interviews on tinybuddha.com, but I am not compensated for writing or obligated to write anything specific. I am an Amazon affiliate, meaning I earn a percentage of all books purchased through the links I provide on this site.