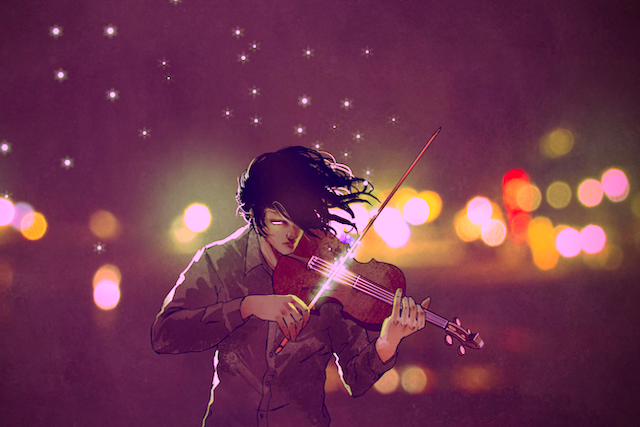 A while back, during one of my therapy sessions, I became acquainted with the word “dysthymia.”

I was puzzled at first, but as my therapist dug deeper into the subject, I realized that complex-sounding term was, in fact, a birth name to the grizzly monster that has been shadowing me for years. It’s more commonly known as persistent depressive disorder.

I can’t exactly remember the onset of an extended period when I felt lower than usual. It might have sneaked in unnoticed in my early teens and grown out of proportion since then. It might have been born with me. I have no idea.

All I know is, I’ve had a pervading sense of hopelessness long enough to convince myself that something was wrong. It’s only natural for a child to feel threatened by the world around them. At least that’s how I felt, day in and day out.

I was told it would only be a matter of time until I grew out of it and became a self-assured woman. Well, I’m twenty years old and this day has never come, and I’ll tell you, the old times were paradise. I was lucky to have my parents’ back in every situation, and the thought of loosening my grip on their protection with the passing years was a scary prospect.

Inevitably, I grew up and things didn’t get any easier.

My generalized fear mingled with an endless hunt for the meaning behind words, people’s actions, and even life itself. The existential nature of these questions made it impossible for me to get concrete answers, which overloaded my brain with the untold possibilities, thus fueling an anxiety disorder.

Being an avid gobbler of pills and a depression sufferer herself, my mother suggested that I went to a psychiatrist. As expected, at sixteen I left the doctor’s office with an antidepressant prescription in hand, as I doubted both my sanity and worth.

In a different session, I can recall my therapist drawing a chart of sorts, in order to illustrate my situation: she traced three parallel horizontal lines and named them “euphoria,” “neutrality,” and “depression,” from top to bottom.

She then drew a squiggly line with stable highs and lows, yet mostly focused in the area between depression and neutrality.

What that means is I’m bound to feel down most days, with the occasional bout of gloom and/or cheerfulness, depending on the situation. The mood sways aren’t fickle; they’re usually curbed into the same spectrum, but still, sometimes I wish the ups would last longer.

“Don’t worry, that is very common in highly sensitive people,” she said to me. “Now that you’ve named that feeling, it will become easier to deal with.”

At the time, that wasn’t helpful at all. Why did my personality have to be built this way? Would I have to deal with this for the rest of my life? That’s not what I came here for!

I developed an unhealthy habit of comparison, as I envied the life of every extroverted and confident person I knew, even if that meant scrolling through their social media pages (which, let’s face it, makes everyone seem at the top of their game on a daily basis).

For months on end I tried to stick to a fully positive lifestyle. Spoiler alert: I was doing it wrong. It took me a while to recognize that I didn’t have to be happy all the time nor rebuff my icky moments in exchange for a phony, dimmed spark of sunshine. I felt something was missing.

I was in denial. I was rejecting myself, whom I’ll have to spend the rest of my days with whether I want to or not. Little did I know, refusing who I was wouldn’t do anything for me; it would only hinder the process of acceptance.

All I had to do was skew my perspective, bit by bit. And I did, with the help of unexpected sources and events.

During a recent conversation with my brother, I came to the slow realization that I might have underrated what can prove itself to be a powerful attribute.

His girlfriend had broken up with him, and his devastation was painful to watch. However, his main objection was that he felt guilty for “feeling too much while she felt way less.” I could identify with him at that moment.

He would beat himself up and judge his past actions, wishing he could go back and suppress the excess emotion he poured into the relationship. Anyone who’s familiar with him would advise him to never change for a girl, and that the right one would see this supposed “defect” as a major quality.

Being his twin sister, of course we’d share some traits– besides in appearance. And that’s it: we feel too much. Too much of everything, whether it be the pain of a heartbreak or the delight of succeeding at something, for instance.

In discussing life’s matters, we’ve both agreed upon the fact that oftentimes we may be taken up entirely by emotion, to the point where even gazing at the stars opens our minds to an immensity of otherworldly interpretations. How amazing is that?

Besides, we’re eager seekers of beauty in the little things and lovers of kindness. That depth in our mindset is what allows us to express everything so thoroughly, especially through writing and other kinds of art.

What was supposed to be a wallowing session ended up giving us a different view of ourselves. Needless to say, we finished the conversation feeling way better than when we started it.

See It for What It Is: Just A Trait

About three years ago, something interesting came in the mail. One of my aunts resides in England, and she sends gifts every so often. This particular time, she had a special present for me.

It was a book, but not just any book. It was a self-help book called The Highly Sensitive Person, written by Dr. Elaine N. Aron. It had highlighted passages and comments scribbled all over it, as if Auntie wanted me to pay special attention to them.

I might have rolled my eyes at first, but that’s part of my proud nature. Also, never in my seventeen years had I read a self-help book, so I decided to give it a reluctant try in case she asked about it later and I had to whip off a review. I started reading, and to my surprise, it felt like staring at a mirror.

The book, first published in 1996, promotes the de-stigmatization around sensitive people, often mislabeled as weak, shy, and even antisocial, to name a few labels. It has offered me the best advice I’ve been given, from someone who has been through similar struggles.

It counts on interviews with hundreds of people like me—perhaps like you, too—who have offered their experience as HSPs. Their stories prove that we are not alone and that being sensitive makes us unique in our own ways; we just have to make an effort to see that amidst the haze of society telling us we’re somehow abnormal.

I can relate to my aunt on many levels, especially because we have strikingly similar personalities, which is always a recurrent topic during family reunions. At some point in her life she had the same doubts I do now—she felt unfitting and lost. She gets me, and she made sure I had that in mind by giving me that book.

“Think about the impact on you of not being the ideal for your culture. It has to affect you—not only how others have treated you but how you have come to treat yourself.” ~Elaine N. Aron. Ph. D.

For the first time in a while, I accepted my wholeness. I felt an overdue relief in being myself, comforted to know that being dysthymic and highly sensitive by no means indicates than I’m worse than everybody else.

I’m still coming to terms with my fragile essence. I haven’t left therapy or the medications, and I may need them for the rest of my life, who knows? Even so, in researching alternative ways to cope with my anxiety I stumbled across several posts that swore by meditation, so I decided to give it a shot—and it worked like magic!

I meditate for at least ten minutes daily, and the practice has helped diminish common anxious and depressive symptoms, such as a fast heartbeat and racing thoughts. This happens due to meditation’s scientifically suggested power to positively modify our brains—yes, it’s possible! If combined with consistent daily activities such as exercising or anything that sparks creativity, it becomes a strong healing method.

The good news is, my sensitivity has ceased to be a problem. Whenever it wants in, I won’t slam the door, I’ll just invite it in for a cup of coffee instead. Maybe acceptance is all it needs to rest cozy in my chest.

Laila is a Brazilian Portuguese/English student and full-time dreamer. She holds a deep passion for writing and aspires to make a difference to those who feel detached from this crazy, yet wonderful world we live in. You can find her blog at thoughtinventory.home.blog.

How to Honor Your Sensitivity (Because It’s Actually a Strength)

30 Reminders for Sensitive People Who Feel Drained, Ashamed, or Judged