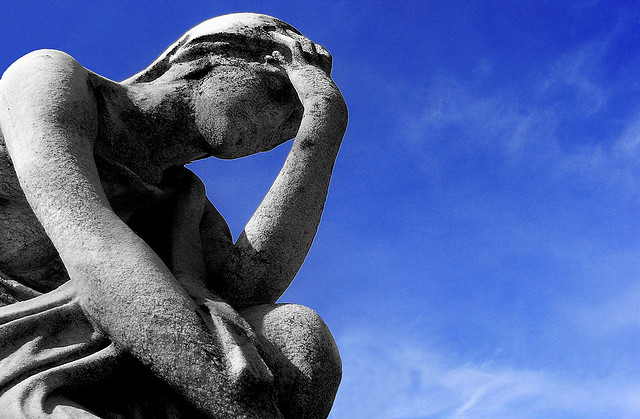 “I can’t believe I screwed this up again!”

The third grader ruminated as he walked away from the soccer field where his team had tied, two to two. It was their sixth tie in seven games.

The lone game that was not a tie was a loss. According to this young man, his team’s record was a direct reflection of his worth; therefore, verbal self-deprecation was the only response one should have after such failure.

His mother waited for him in the parking lot, hoping her ultra-competitive son would cool off from this perceived-to-be-colossal failure before heading home, but she knew how he was and was bracing herself for the usual tirade of self-deprecation.

The third grader opened the passenger door, felt the synthetic coolness of the air conditioner, and plopped down into his seat.

“Hi honey. How are you doing?” she asked, trying to gauge her son’s emotions.

“You played well, though,” she remained kind and supportive.

“You can’t be so hard on yourself. You have another game next week,” she said with concern.

“Mom! Please just stop! We tied…again! I’m sick of it! I’d rather just lose, but we find a way to tie everyone! We tie the best team in the league, the average team, and then today we tie this crappy team! I’m sick of it!” he shouted, nearing tears, and then explained:

That third grader was me—still is to a certain extent.

This third person account was my first memory of being “hyper self-critical,” as my internship supervisor accurately wrote in her evaluation of me a year ago.

At first I wrote this story in the first person, and I felt the same emotions as I did back in third grade.

When I wrote it in the third person, I was able to gain distance from the experience, and objectively see how ridiculous I behaved, and how sad it is to see a third grader put that much pressure on himself for something that’s supposed to be fun.

I am still “hyper self-critical.” Although I may not be throwing a tantrum, yelling at my mom, dad, and teammates, I still have this screaming critic telling me the things I have, am, and will screw up.

When I was younger, I took great pride in my inner critic.

I liked that I was hard on myself, that I expected perfection, and when I wasn’t perfect I cursed myself, punched a wall, yelled at a concerned friend or family member, and then isolated myself, promising that I would never screw up again.

Then, I’d screw up again. The cycle continued.

I continued this cycle all the way through college. I would start off the semester doing great, and then one missed assignment or one poor quiz score, and I’d berate myself for being stupid and lazy.

Luckily for everyone around me, I learned to keep my disappointment to myself, so no more self-deprecating rants.

It wasn’t until I took a class in conflict resolution that I began to question my perfectionist tendencies. In this class we learned a lot about communicating empathetically with co-workers, friends, family members, and significant others.

However, the internal conflicts, more specifically, the section on self-forgiveness, stuck with me.

This topic was not a monumental moment that forever changed my life; I don’t really believe in such moments. Rather, it was the first time I pondered the usefulness of being so critical of myself.

Is it really useful to dwell on mistakes and feel terrible about them constantly?

No. It was not helpful, but it did not change the content of my thoughts because of this realization, nor did it make me feel any better. Instead I felt frustrated with myself.

I always looked at mistakes as learning opportunities; however, I never thought of them as acceptable in my mind. I understood that I inevitably would make mistakes, but this understanding conveniently disappeared when I would fall short of my expectations.

A few months after this class, I started seeing a therapist.

I justified going to therapy as an educational experience to further my understanding of my major, psychology; however, the truth was I wanted to understand my past and how it has shaped me.

From therapy, I learned to view past versions of myself from a third person perspective, which allowed me to empathize with the younger me.

I saw how hard this young boy worked, how much he achieved, and how frequently he felt inadequate and berated himself for everything that could have gone better, either within his control or outside of his control.

It did not matter to this boy. Coming up short was the result of his effort, no one else. No excuses.

Eventually, I was able to see some of my failures were not simply a lack of drive and/or intelligence; they were the result of my environment, so naturally I began to blame people, places, and things.

Mainly I blamed my dad, and my family’s history of bipolar disorder and depression, for my hypercritical mind.

Seeing things this way allowed me to forgive myself a bit more, but then I was angry with my dad for instilling his hypercritical mind in me.

A new cycle had started and I felt worse than ever before. As soon as I was by myself, which was often, I would break down thinking about my history, feeling sorry for myself and finally crying.

Gradually, the blaming dissipated and gave way to acceptance, and I began to actually like the person I am, appreciate my upbringing, and accept but not buy into the hypercritical part of my mind.

I’m all right with the thoughts and emotions that I experience. I’m actually grateful for my mind’s criticism.

Without the ridiculous criticism my mind concocts, I wouldn’t have my dry sense of humor, my drive to improve, nor would I experience the triumph of realizing that I can have doubts, worries, and negative thoughts, yet still act in accordance with my values.

I definitely by no means would say, “I’ve figured it out” or anything near that, but maybe I’m just being too critical?

It’d be unrealistic to expect my mind to think I have perfected anything, but through my experience, I have found the following process useful when dealing with my hypercritical mind:

You don’t have to feel a certain way or have particular thoughts to act in accordance with your values.

Guido Saltarelli is a graduate student whose blog Adept Mind (adeptmind.net) focuses on giving readers immediately useful tips and techniques to live a more fulfilling life drawn from his education and personal experience. He would love to hear from you through his website or Twitter @adept_mind.

The Power of Perspective: A Simple Way to Ease Anxiety